“A vegetarian walked into a bar. . . . I only know because he told everyone within two minutes.” That joke perfectly encapsulates why I never tell anyone that I am a vegetarian. I either hypocritically write a blog about it, or I am introduced by my mother as such, “Nick is a vegetarian . . .” and then leaning forward a bit she clarifies, “that means he doesn’t eat meat.” Reactions can range from wild ecstasy to tepid disdain.

One friend solemnly nodded her head and then proceeded to rub my back as though I had just informed her that I had gotten myself mixed up with a cult. Another took the news as a challenge to his lifestyle and retorted with, “Well, I eat meat?!” His statement, which seemed to begin in a whole-hearted declaration of his fealty to meat, then appeared to trail off into a momentary contemplation of his life choices.

No matter the reaction, the question always boils down to ‘why’? There were the obvious reasons: health benefits, animal welfare, and environmental concerns; but my reason, although definitely swayed by those factors, was not so lofty. The truth is that it was due to the somewhat mundane motive of just wanting to change. Of course, change is an extremely difficult goal, one that I was not undertaking lightly given my sordid past of meat consumption.

Boy did I love eating meat. I elevated the consumption of meat to a quasi-religious experience. I signed up for a Co-op that would provide locally sourced, organically raised cows, pigs and chickens packaged as beautifully cut slabs of meat that I could pick up every three months. This Co-op offered a ‘Haycation’ which turned out to be a weekend trip during which I could meet and befriend the animals that would eventually become the beef in my Bolognese. As nice as it was to “meet my meat”, I began to have the paranoid notion that the animals knew that I had eaten their friends and family. This notion was confirmed when one of the cows rudely chased me along the green pasture when all I wanted to do was assuage my guilt of consuming it by sharing an intimate moment with the animal. When I felt that I was getting too chummy with my food I would intersperse my carnivorous predilections with meat products that bore no resemblance to anything found in nature. Your average sausage biscuit is a good example. Sausage biscuits seem to be made of a delicate mix of despair and self-hatred. In fact, every time I ate one for breakfast, I would recite the tagline: “Sausage biscuits, when you’re ready to give up on the day before it’s even begun!”

I thought that giving all of that up would be hard. I thought that the craving for a hamburger would be too overwhelming. But over time I noticed that my behavior towards food changed. Not that I didn’t occasionally dabble in the dicey domain of meat substitute products. The range of veggie burger quality is a mystery to me, some are absolutely amazing, while others taste like what I imagine depression would taste like. And not that I didn’t ever second-guess my decision. One evening, as I was staring at a plate of tofu wondering if it were possible for tofu to die, and longingly gazing at another diner who was on the brink of entering into a carnal relationship with his T-bone steak, I returned to the question of ‘why’?

I truly believe that vegetarianism has precipitated profound positive changes in my everyday life. I’ve found that making a positive change in one area of my life has had a domino effect. It has made me more mindful. I began hiking, I cut down on my sugar intake and, with each incremental change, I was slowly but surely building a sustainable change in my lifestyle. By focusing on short-term, attainable goals, I was able to reap long term and sustainable benefits. I felt that I was training myself to make better decisions.

I am not an evangelical for vegetarianism. I can just recite the facts: I have lost fifty pounds, I have far more energy and, most importantly, I feel a sense of accomplishment at having set a goal and achieved it. In short, it not only made me healthier it made me feel good about myself. And that is a good enough reason for me. 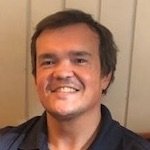 Nick Barta lives in Richmond, Va., having returned after working four years abroad in Vienna, Austria. After studying Law in Seattle, Wash., he currently works as a corporate/regulatory attorney. When he is not reading through mind-numbing regulations he loves to hike and watch cooking shows.