I wasn’t always a thief. But some losses demand rebalancing. Redistribution. Retribution?

In hindsight, I should have asked for the house. But the habit of self-sacrifice was so ingrained it barely crossed my mind. Instead, in the dead of winter I took our tiny travel trailer to a campground along the river and left him our two-bedroom rancher on its fertile country acre. Later that spring, when I moved into a real house, I took only the minimum from the home we’d shared, relinquishing the myriad artifacts of our life together that meant nothing to him: the dusty framed pictures upon the walls, the cyclamens blooming in the greenhouse window, the braided wool rugs I’d bought from L.L. Bean. The hasty harvest of my books and clothes that day a single swift ripple across his placid pond, gone before he’d noticed.

Before I left, I said goodbye. Not to him, but to my garden. The tender darling I’d birthed and suckled, stroked and tended from ages thirty-four to fifty. I strolled the paths I’d made and admired the filigreed leaves of the dissectum Japanese maples. The translucent pink and white and purple of the tricolor beech. The fat buds on the David Austen roses pregnant with promise. The heavy greenish snowballs of the viburnums nodding on bent stems. My mind moved forward through the seasons. Imagining the “yesterday, today and tomorrow” bush’s purple blooms fading to blue, then white, unadmired. Suspecting the Asian pears and Fuji apples would fall unpicked, rotting back into the earth that had borne them. Fearing oak sprouts would turn into trees, blackberries engulf the camellias, Bermuda grass invade the peonies.

If he had been a bad man, cruel or unkind, I would have fought for the house, if only for the garden.

A year ago, I was dropping something off at his place while he was away—I still have the keys—and afterward, I strolled the garden that once was mine. That still felt like mine. I’d given it up to an indifferent foster parent, but I was its birth mother and always would be. My name not on the deed, but written into every sapling now a tree, every thicket of shrubs and errant self-seeding annual. The fragrant mock orange and sweet olive now blocked the vineyard views out front. Red-stemmed dogwoods crowded the side yard path. The backyard had become a jungle of woody lilacs, overgrown forsythia, thorny Cecile Brunner roses, and giant unshorn grasses. The hydrangeas half-dead from drought, daylilies bristling with dead stalks, roses cowering weakly beneath their suckers. I’d planted every single one. Oak seedlings and blackberries ran rampant, threatening a hostile takeover, just as I’d feared. Regret and sorrow twisted in my gut. My people called to me.

That night I held my breath and sent him an email. “Noticed the garden’s getting a little wild over there!” Aiming for breezy, casual. Careful not to betray the depths of my desperation. Knowing him as I did. A good man, but I’d left him for a reason. I closed with “Now I’m retired, can I be your gardener?!”

Several days later, a reply. “Sure, but I can’t pay you what you’re worth.” As a professional landscape contractor and designer, I’d charged $110 an hour for my time.

“How about the going rate for gardeners these days? $40 an hour sound fair?” It did. I didn’t tell him I would have worked in the yard for free. Would have paid him for the chance to rescue my beloveds. To resuscitate his hostages.

I started in the front. Employing first my folding pruning saw, then long-handled loppers, finally my Felco pruners. Thinning, heading, reducing, renewing, shaping. Stacking the branches in neat piles for chipping. Next, I attacked the interlopers. Digging, pulling, grubbing. First the oak saplings and blackberries, then the spreaders and invaders. Four o’clocks sprouting amongst the roses, Cornus “Midwinter Fire” suckers in the mulchy paths, a Euonymus “Silver King” now crowded by a vitex. These did not go onto the chipping pile. These I placed reverently in the hatchback of my car, and subsequently into my current garden. I did not steal these plants, however. I considered them foundlings. Orphans, perhaps. Certainly, unwanted.

I continued gardening at my former home as fall became winter became spring, each season the garden whispering secrets meant only for me. As the summer parch began—Northern California is rainless from April to October—the thirstier plants began to sulk and droop. I worried about the Michelia, an evergreen shrub prized for its richly fragrant flowers. I’d only seen this rare variety once, at a nursery now long closed. Its dull, drought-stricken leaves hung straight down, nearly dead from lack of water. I irrigated it when I could, a hose trickling at its base as I mowed and weeded in the hot summer sun, but it was dying. Wasn’t it?

Did he even know he owned a Michelia? Did he know what a Michelia was? Look, someone had hacked it away from the faucet. That plant was in the way, wasn’t it? And nearly dwarfed by the nearby camellia. Surely I would be doing it, and him, a favor by removing it? I’d be rehoming it. It wasn’t stealing, was it? I thought not.

After the Michelia, something softened, or perhaps loosened. I began “thinning” herbaceous peonies that didn’t need it. “Harvesting” hollyhock seedlings, “rescuing” first a half-dead Asclepias and then a rare, languishing, weeping butterfly bush.

The thriving Rosa glauca was harder to justify. If I could have purchased another, I certainly would have. But I could not: again, I’d only ever found the one. Every time I worked in the now lovely garden of my former spouse, I lusted after that plant. I suspected its owner was most likely oblivious to its existence. Certainly to its charms. Its elegant, sparse gray foliage and restrained, single soft pink blooms. A rose no one but a plant nut like myself would love, much less miss . . .

Reader, I stole that plant. 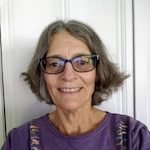 Kate Sheridan was a landscape designer and contractor for forty years. She wrote Dig This, a landscaping how-to book, published by Sasquatch in 2003. She recently completed a memoir about caring for her estranged mother entitled Unclaimed Baggage.