A proposed 21st Century Federal Writers’ Project introduced in the House of Representatives last month is gaining broad support from literary and writers’ organizations hard hit by the Covid pandemic.

The bill, introduced by two Texas Democrats, would hire writers to chronicle the changes wrought by the pandemic, much the way the 1930s project explored the devastating impact of the Great Depression and other historical mileposts.

That enormously successful program paid emerging writers to collect oral histories and tell the stories of Americans whose lives were forever changed. Some of those hired by the program nearly 100 years ago included oral historian extraordinaire Studs Terkel, writers Ralph Ellison and Richard Wright, and poet May Swenson.

The current proposal seeks $60 million in funding to libraries, news organizations, non-profits and others to support writers who lost income during the pandemic. One of the goals is to “document the pandemic’s impact on American life, honor the lives lost to COVID-19, employ struggling writers and academics and create a national archive of work from our time, just as the original FWP left us with a rich collection of guide¬books and oral histories, including the first-person Slave Narratives,” wrote Rep. Ted Lieu, who sponsored the legislation along with Rep. Teresa Leger Fernandez.

Among the organizations supporting the idea is The Authors Guild, which conducted surveys last year showing that more than two-thirds of writers responding had lost nearly half of their pre-pandemic incomes due to loss of freelance journalism work, speaking engagements, teaching jobs, and low book sales due to bookstore closures.

Marie Arana, founding Literary Director of the Library of Congress and former Editor-in-Chief of Book World at the Washington Post, noted the “extraordinary influence that the original Federal Writers’ Project (1935-1943) had on this country’s literary history.” She predicted the program would “rescue unemployed writers, awaken nascent talent, and energize stalled careers,” while also contributing greatly to the country’s historical record.

Ayad Akhtar, a Pulitizer Prize-winning playwright and the president of PEN America, a non-profit that defends free expression and advances literature and human rights, believes that writers have an essential role to play in this moment of global crisis—“that of excavating the truth of our past, bearing witness to our present, and imagining possible futures.”

For more information on the project, including an interview with David Kipen, the former director of literature at the National Endowment for the Arts, who came up with the idea that led to the proposed bill, go to: https://www.kcrw.com/news/shows/press-play-with-madeleine-brand/israel-palestine-coronavirus-writing-refugee/21-century-federal-writers-project. 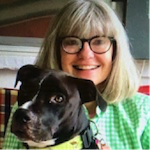 Deborah Kelly is Associate Editor of Streetlight. She spent the first twenty years of her career as a reporter and writer for daily newspapers, primarily with the Richmond Times-Dispatch. Indulging her love of poetry and the arts, she moved on to magazine editing at 64, a nationally recognized regional arts magazine. She has freelanced for NPR and a variety of national and regional health magazines. She lives in Richmond with her near-constant companion, Suzie, a sweet but headstrong rescue.