It will be a year, he says.

The sun behind her covers the barman and his wall of drinkery in rosey light. A ceiling fan stirs fry-oil and lemon around them, but she still feels slick with sweat on her face and arms and between her thighs. She wishes she had chosen a different dress, or had put her hair up, or that they had chosen to eat at a more comfortable distance from nature. She sips her pina-colada, nods her head, and listens to the lazy waves.

He takes a gulp of rum punch. When he turns to face her the sunlight floods his eyes. You’ll stay busy. he tells her. We both will. And I’ll be back every few months. And for holidays.

He smiles. Not because he thinks she should be happy, but because he wants her to be brave. We can make it work.

A pair of seagulls call to each other as they flit in and out of the sun, in and out of reality. They land on a wooden pier nearby, fat and glowing. She thinks they are a couple, the way they bob their heads around each other, pecking at what the other pecks at, but she can’t say. She knows nothing about birds.

What is it? he asks.

She points, he looks, and the birds look back, eyeing his fried calamari.

Do you think they’re a couple?

He says maybe, but he too knows nothing about birds.

He orders another drink, and she pulls out her phone. He knows she’s looking up seagulls and how to tell the sexes apart, but soon she’ll use it to text her sister, and her mom, and he tries not to be irrationally angry.

I can’t say no to this, he tells her as the newest rum punch comes sweating to his hand. I can, but it would never be right.

I understand, she says.

Touching her back, he feels the slick wet heat of her skin, and he is homesick for her. We’ll make it work.

They stare at the seagulls for a while. The seagulls stare back. When the staring grows tedious, she fits a piece of shrimp lightly dressed in vodka-sauce onto her fork and tosses it. It flies unreal and red in the air, then pink and very real in a splatter on the walkway. The seagulls turn to the shrimp, then to her. They do not move.

I’ll be damned, he says.

She waits, and he thinks he’s never seen her quite like this before. Body set. Face without expression. Eyes unmoving. Patient as the hunter. When it becomes clear that the seagulls are not interested in her offering she tosses more shrimp. A whole piece this time. Another flight, another splatter. More bobbing from the birds, but not the first flutter towards the food.

The pairs continue to stare at each other. A waiter, having seen the whole thing, does not hide her displeasure as she scrapes the food off of the walkway into a dustpan and carries it away. The birds don’t move. The miniature umbrella in his drink falls inward and begins to drown. He does not notice. A fly lands on her pasta. It leaves, offended that she did not swipe at it.

Shoo, he says first. Then she joins in with Go on. Scat! loud enough that other guests turn to look. The gulls do not listen. They only watch, their bodies electric pink in the setting sun.

When he stands his loafers smack against the deck. He advances, and he thinks, in the moment, that he might be capable of anything, even murdering a seagull. But he is not. The birds wait till he can almost touch them, then fly away together. They fly without flapping, in perfect unison, calm as the sway of the sea. They fly in and out of the reddening light, in and out of reality, until in one majestic swoop they set their wings and dive beyond the arcade and out of sight.

Sorry, he says as he comes back. It was the way they were starring at us.

He returns to the bar beside her. The restaurant eyes them, then slowly resumes its murmurs. And when the noise returns she realizes that, just for a moment, all things had stopped. For a moment the only thing in her life had been them, hating and then staring at those perfectly swaying birds. For one last moment, before the hard talks and the packing and the calls that only stir the ache inside, she had been with him, really with him. And she had been happy.

Weren’t they beautiful in the air though? she says.

Very. He looks at his melted drink and sighs. Like I was saying, it will only be a year. 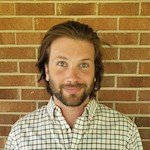 Clyde Harkrader, a graduate of the University of Lynchburg, is a writer living in Goochland, Va., which is a funny name, isn’t it? He is seeking representation for a novel, and in the meantime living a very happy life indeed with his wife, two children, and his comfort-loving pitbull, Mr. Darcy.