Woodpeckers at it again this morning
boring into the cedar clapboard, fascia,
cove boards too soft with age, too
inviting for the particular family-to-be
of the pileated kind, red crest pure
blazon and I rise time after
time, running outside arms waving
yelling Out! Out! and then worse the third
or fourth time, my cup of coffee
gone cold, page lost in book, and it
knows I’ll give it up sooner or later or
probably doesn’t care if I wouldn’t
but I do, feet dew-soaked from all
the running around in the flagrant
April green collection of grass-weeds-
crocus and there, edge of garden,
the largest jack rabbit I’ve ever seen
on its second spinach plant in the plot
we babied through winter and those
two deer eyeing the blueberry bushes over
the not-high-enough fence, I say
to them, raising this cold cup
of coffee in a toast and to the raccoon
waiting to join them; all
unabashed, relentless, sacred, spur
and thorn, here’s to us I say out loud,
this one moment entirely ours until
the feeling passes and I run outside,
arms flailing but they’re gone as spring
gasps tenderly for all of us. 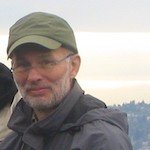