My brother and I played war in a ditch
near the Ferris Wheel while the carnival barker shouted.
Our games didn’t take precedence over
my wanting to live like a civilized person,
but my father couldn’t afford violin lessons for me.
Most of my teachers sucked, and we had only
cookbooks and a ragged dictionary at home.
My father killed so many deer we had plenty
to eat, but I still wore a thick jacket in the cold.

I can’t say it called me to the world,
but I loved snapping the bra strap of the girl
I sat behind in study hall, and I loved inhaling
the perfume of the only teacher I liked,
Miss Greenstein, who showed me how to find
the heart of a bullfrog. Miss Greenstein was a Jew.
My father didn’t like Jews, because, he said,
too many of them were money-grubbing elitists.
I don’t know if he thought some of them
were peaceful, wooden figures
who had marched toward their end.

I told my father that Miss Greenstein’s uncle
died at Bergen-Belsen, and he clenched his fists.
He had wanted to shoot Krauts (he called them),
but he was 4-F from a motorcycle wreck
that gave him a bum ankle.
I told him that war was obscene, and he said
that the Bible says somewhere killing
your enemy is fine. He started thumbing
his Bible, and I walked away—more concerned
about why girls wouldn’t give me a word.

I took my tent to the deepest woods,
pictured my teacher naked and wondered
if she smelled of lemon or jasmine,
not one twinge of magical guilt for me.
So the dark began in the shape of rain. 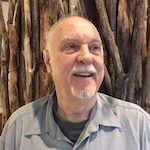