There’s this Tree. It’s a Cottonwood. It’s been there longer than forever, a gentle, generous tower on the long green lawn in front of the dorms. Three decades ago, when I was still teaching at the college, I recruited a few of my students to help me measure its trunk—not in feet but in arm-spans. It took six of us, holding hands, stretching our arms, and pressing our faces to its rough bark to complete the circle around the tree. I invited them to imagine what the tree had witnessed—protests against Vietnam, intense games of Frisbee, friendships forged and forgotten. These days, I notice that its bark is the color or my hair—brownish-gray. I can fit my fingers in the deep grooves between its ridges. The two large limbs, in what I know is its front, are as always, gracefully raised in some kind of invitation.

Up until a month ago, the campus of the small college in the small town in the middle of Iowa looked like the Garden of Eden, pre-Eve’s run-in with the snake. The ground crew had taken advantage of the annual summer absence of students to plant new flowers and native grasses and hang roomy rope hammocks between the Sycamore trees. When the Virus arrived and delayed the students’ return, the landscaping continued. There were just a few young people present, stranded because of travel restrictions.

As a rule, my husband Sandy and I like storms, find it thrilling to watch Mother Nature having a tantrum. But this one was different. And after we’d checked to see if our house was intact (it was), if the trees in our yard were more-or-less upright (they were), and if the electricity would ever come back on (nobody knew), I told him I needed to check on The Tree.

We put on our Covid masks, snapped the leash on our dog Hyde’s collar, and walked the few short blocks to the college, from which we had both retired. The trip took much longer than usual because we had to avoid branches, limbs, shingles, street signs, and the power lines that seemed to be writhing on the streets and sidewalks. I don’t pray, but I found myself asking somebody or something to let the ancient Cottonwood be safe.

Oh, the campus. The lawns that the day before had been a soft, flawless velvet were littered with nature. The usually welcome fragrance of fresh-cut wood floated ironically in the air.

But The Tree still stood, majestic and serene. Three of its branches hung at painful angles, but its arms, its arms were intact and welcoming. I raised my own in gratitude and celebration, then dropped them and looked around, hoping nobody had seen. Sandy smiled at me and patted the huge, grooved trunk. The walk back home was a more cheerful journey.

There followed a week without power. The absence of radio, TV, and landline phones created an unaccustomed quiet, broken periodically by chainsaws. At night, candles, oil lamps, and battery-operated lanterns glowed softly in windows. The moon was amazingly bright. It wasn’t all bad.

Most days, I visited The Tree. When nobody was around, which was usually, I broke some kind of law or code by slipping off Hyde’s leash and letting her investigate the limitless smells that were completely out of my sense range. She didn’t go far unless she spotted a squirrel, sitting erect at the foot of a tree and holding a nut in its front paws, like a volleyball it was getting ready to serve. Then she crept ever-so-slowly toward the smaller critter, who pretended not to notice her until she sprang forward for the catch—at which point the squirrel would skitter up the tree and laugh at my disappointed dog. If it was a game, Hyde was the consistent loser.

I stood facing The Tree, stretching up my arms to the two matching limbs twenty feet above my head, a virtual hug. I felt somewhat embarrassed, yet protected, and reassured.

On the sixth and final day of the blackout, I found that someone else had discovered The Cottonwood. A slim, slight young man—a boy, really, almost certainly one of the international students. I imagined his loneliness, having to deal with the pandemic and the Derecho on top of all the other concerns that came with beginning an academic year. Maybe, I thought, maybe he, too feels a comforting connection with this ancient Tree. And then I noticed the tension in his stance, very like Hyde’s when she’s stalking a squirrel. And I saw the baseball glove on his left hand and the small white ball In his right fist. He drew himself in, raised his right arm and leg and aimed at The Tree.

I felt the impact in my chest.

I had always believed that the college belonged, first of all, to the students—the gloriously bright, heavily talented youngsters who had come (who quite knew why?) from literally everywhere to the middle of the middle of the Midwest to prepare for changing the world.

And I asked myself—Was he really hurting The Tree? Was this some kind of therapy, a release from the frustration of starting a semester while a pandemic and a land hurricane, (not to mention—and so I will not—an untenable political situation) swirled around him? What right had I to ask him to stop?

I stood watching; hearing, and feeling the crash of the ball against The Tree; hoping the pitcher—and he clearly was one—would at least pause so I could speak to him; hoping, even, that he’d think Hyde, who was following the ball with great interest, was about to attack him.

But the only pause in the pummeling came when one of his throws missed its target and the pitcher had to chase down his ball. I walked after him, dog  in tow, calling, “Excuse me, excuse . . .,” but he ignored me, retrieved the baseball, and returned to what now seemed to me to be an assault.

So I left. I left feeling like a guilty coward. At dinner, I told Sandy about my concerns for The Cottonwood and the student. What, I wanted to know, was my responsibility to either—or both? As usual, he responded with good, sane questions:

Was The Tree really being harmed (I had wondered that myself)?

Did I really want to alert Student Affairs and put the student in anger-management therapy?

I saw his point, but the feeling of failed responsibility lasted into the next day, when, nervous and unsure, I took Hyde back to the campus. The pitcher was there, wearing his glove, holding his baseball. I slowly made my way toward him. I didn’t want to seem angry or confrontational. But what would I say when we were face-to-face—a seventy more-than-something woman with a brown dog and a less-than-twenty-year-old boy/man with a hard, white ball?

“Excuse me,” I said. He said nothing.  I struggled on: “I know this will sound strange, but as you can see, that’s a very old Tree you’re throwing at. It’s probably been there for centuries. And it’s important to a lot of people. It’s important to me. And it’s wounded.” I pointed to its dangling branches. “I don’t think it should be hurt anymore. Do you?”

He looked at the ground. I thought he wasn’t going to answer. Then he said, so quietly I could barely hear him, “It’s the only place around here I can throw the ball.”

“Thank you,” I said. “Thank you,” and raising my hand in a small wave, I turned to leave. As I walked away, I felt my tension lessen; my chest had room in it again. The ragged campus seemed more hopeful. The air smelled fresh.

And then I heard— ‘CRACK.’ I didn’t turn around.

Though I haven’t seen the pitcher again, I find new marks on the tree: In some places, a section of bark has been knocked away, leaving a yellow grayness like a bruise. In others, it’s as if the flesh of the tree has been exposed, pink and shining like the skin under a broken blister.

And I think again of all The Cottonwood has witnessed. I imagine that The Tree smiles—or the arboreal equivalent—at how seriously humans take themselves. And in those few moments, I feel calm and safe, and I hope that the young man/boy/student with the baseball, in the face of a pandemic, a suffering planet, and a troubled nation and world, finds some solace, too. 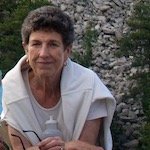 Betty Moffett lives in Grinnell, Iowa, where she and her husband enjoy walking on their restored prairie with their dog, Hyde, and playing with the Too Many String Band.
After teaching for nearly thirty years in Grinnell College’s Writing Lab, she is trying to take her own advice. Her stories have appeared in various magazines and journals, including Bluestem, The Macguffin, Poydras, and The Wapsipinicon Almanac. In 2018, Ice Cube Press published Coming Clean, a collection of her short stories.

One thought on “The Tree by Betty Moffett”