One of the most surprising things I’ve discovered about writing is that while putting words on the page can be a solitary act, “being a writer” can’t be.

Mind The Gap
There is a gap between what people think the writing journey looks like, and what it really looks like. Non-writers picture you, alone in a book-lined room, dashing off deathless prose from Once Upon a Time to The End, occasionally gazing moodily into the distance as you wrestle with a creative demon, but ultimately in charge of your story all the way.

Even we, as writers, sometimes fall prey to this gap between the illusion of a writing life and the reality.

That’s when the voices in our heads get us:

Why aren’t you writing faster/better/more?

Maybe you’re not meant to be a writer.
(Whatever that’s supposed to mean!)

We Need Other Writers
In leading the StoryADay (https://storyaday.org/) community for ten years, I have learned these things:

* You are not alone. Whatever you fear, whatever you are struggling with, someone else has struggled with it before, or is struggling with it now. It doesn’t mean you’re not a writer. It just means you’re human.

* We write best when we feel relaxed, focused and safe. But nobody feels super-confident all the time. Other writers know how you feel, and will support you.

* Asking for help will not kill you. Shocking, I know, but there it is. Sometimes simply acknowledging what you’re struggling with takes away its sting, entirely.

* Being vulnerable can be an act of generosity. By asking for help you will not only get the necessary support, you may lead someone else to the answer they need.

* Every writer is a writhing mass of insecurities wrapped in a skin suit. Everyone. I’ve interviewed authors who have a string of New York Times best-sellers under their belt and yet they never feel like they know what they are doing. Ever.

* Sometimes We Need a Kick In The Rear. Other writers, recognizing their own neuroses in your complaints, will happily tell you to knock it off if you descend into unproductive whining.

* Writers are the best people you’ll ever meet. Put any two writers together and they will quickly uncover each other’s “weird” and, most likely, be delighted by it. Writers think deeply, feel deeply, and if you can get one to open up to you, you will never be bored or lonely again.

We Need the Right Other Writers
OK, so my last point was a little facetious. Here’s an important caveat: Don’t spend time (real or virtual) with anyone who makes you feel worse about your way of living a writing life.

Just because Stephen King writes 2,000 words every day, doesn’t mean you have to.
It says nothing about your ability as a writer if you prefer Cozy Mysteries to Literary Fiction.

If your writing friend makes you feel bad because she gets up before dawn every morning and never misses a writing session . . . find a new writing friend, one who celebrates you and lifts you up and tells you that of course it’s OK to write at 11 p.m. every other day, if that’s what gets the job done . . .

Only you can define what success looks like, for you. Other writers can help you get there.
Making the writing trek with like-minded writers means you increase your chances of staying on the right path. It means someone always has your back. And it definitely means you’ll have more fun along the way.

This essay was originally published on https://creativelightfactory.org. 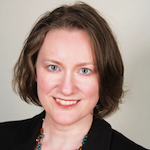 Julie Duffy is the founder and director of the creativity challenge StoryADay.org, where she has blogged about the creative life and short stories since 2010. She has written for Writer’s Digest and Writer’s Journal, was the genre columnist for Flash Fiction Chronicles, and is a columnist for WriterUnboxed.com. Originally from Scotland, she lives in Pennsylvania with her husband and two children. More of her work can be found at http://www.julieduffy.com/.