“I’m going to tweet about this, and I need every single English-speaking celebrity on the planet to retweet my tweet. This is monstrous.”

We are stopped at a red light. Devon, my husband of ten years, looks at me indulgently and says, “Good luck with that. Also, not sure monstrous is the right word here.”

I emit a low growl. “People have seriously got to stop butchering the English language. I’ve already written the tweet in my mind. Listen.” Devon makes his fake “deep-thinking” face, causing me to roll my eyes. “Actual meaning of nonplussed: surprised, bewildered, confused, taken aback, etc. As in ‘I am extremely nonplussed by the fact that a ton of people are using the word nonplussed incorrectly.’ Please spread the word and help stop the carnage.”

The light is now green. Devon’s long, denim-clad leg moves toward the gas pedal. “Whatever you say, honey.”  He smirks. I hiss and pretend to jab him in the ribs. Then I check the back seat out of habit. Our six-year-old daughter Aria is sitting quietly, stroking the stuffed llama we bought her right before leaving the petting zoo an hour ago. She appears to be in her own world. I sigh inwardly, and then outwardly. Devon pats my knee. Aria is different from other children her age, and I constantly worry that she’ll be bullied and friendless as a result. Devon, ever the optimist, says that even if Aria marches to the beat of a different drummer, it’s a catchy beat.

Minutes later, he maneuvers our vehicle into a parking spot in front of the bank entrance. “Hey Ri-Ri, do you want to stay in the car with me or do you want to go to the ATM with Mommy?”

Aria mulls this over for a good ten seconds before saying, “I’ll go with Mommy.” Devon disengages the childproof lock and Aria hops out of the left back seat like a bunny. I enter the bank lobby, Aria in tow, and examine the discouraging handwritten sign taped to the first in a long line of ATMs: “All of our ATMs are currently dispensing only $100 bills. We apologize for the inconvenience.” I groan. I hate $100 bills. I hate breaking them. I hate the fact that they resemble Monopoly money. “Okay, kiddo, looks like we’re going to have to talk to someone. Gross, right?” I say teasingly. Aria nods, her expression solemn. We join the teller line. It doesn’t look too bad; only one teller on a Saturday, which is utterly ridiculous, but at least there are only two people ahead of us. We reach the teller in six minutes, during which Aria entertains herself by performing pirouettes at my side, her box braids flailing. Things could definitely be worse.

“Good afternoon,” I say, as I dip my card into the reader. Although I’ve been banking here for years, the teller is not one that I recognize. His name tag says “Joshua P.-B.”  I predict that his surnames are Pinkerton-Belvedere. Or something like that. “I’d like to withdraw $600, all in twenties.” Pullman-Burke does not respond, although I know he greeted the customers who preceded me. I shrug and enter my pin number. I don’t require a salutation; I just need him to give me small denominations.

A few seconds later his eyebrows shoot way up. I surmise that this is because my banking information has now populated his computer screen.

“Yup, that’s me,” I reply. Now he takes the time to look me up and down. Sloooowly. I can feel a dark and hot emotion rising under my skin. I ruthlessly push it down. I mean, I can sort of understand where he’s coming from. I’m wearing ratty black sneakers that I bought before Payless went out of business, gray yoga pants, and an ill-fitting orange t-shirt that may have—okay, definitely has—some sort of animal fluid on the right side near the hem. A large pouf of hair is exploding from a white scrunchie that is simply not up to the task of containment. In my defense, I’m properly dressed for the petting zoo, and hadn’t planned on any public post-zoo interactions until after I’d cleaned up. Stupid ATMs.

“I’m going to need to see your driver’s license.” Pierce-Bellington’s tone is not friendly. I tell myself that this is new banking protocol for all customers, even the ones who correctly type in their pin numbers. I know this to be a feel-good lie, because I just watched my new nemesis turn money over to the two people ahead of me without requesting identification. But I am going to be super-zen about this. I visualize the pink “Not today, Satan” mug currently sitting on my kitchen counter, and roll my shoulders. Then I hand him my enhanced driver’s license. He scrutinizes it (for approximately the length of time it takes a watched pot to boil) before handing it back. He starts to gather bills. Sloooowly.

And then he says, conversationally, “So, where did all this money come from?”

I consider telling him the truth, which is that I’m a partner at a white shoe firm in the city, with an hourly rate that he cannot begin to fathom. I consider various spells that proved useful to Harry Potter and company, and move on to concocting my own. In Latin. I consider texting Devon and telling him that I’m going to be awhile. I consider my daughter, who is no longer pirouetting, and is instead still and silent by my side. Use your words, I so often tell her, usually without success.

A toothy smile emerges. “This is the situation, Pembroke-Butterworth. You have exactly twenty seconds”—within his sight line, I carefully set the timer on my iPhone—“to apologize, stuff my money into an envelope, and hand me the envelope. If you don’t do those things within the allotted time frame, I’m going to get Amy, I’m going to close my accounts, and there is going to be what this bank will call an incident. It may end up being international in nature. Nope, make that galactic.” My toffee-colored eyes lock with Paulson-Bedford’s baby blues. He looks away. I place my device on the counter and press start. Five seconds elapse before he mumbles “sorry, ma’am.”  He hands me my money in a small white envelope with two seconds to spare.

As I stuff the envelope into my handbag, branch manager Amy Liebman emerges from the bowels of the back office. She catches my eye and smiles. “Patrice, it’s nice to see you. And oh my goodness your daughter’s getting so big!” Her smile falters when she sees my expression, which I assume is less resting and more active BF. “Is everything all right?”

“That’s a good question,” I reply. “Let’s ask your new teller. Is everything all right, Mr. Hyphen?” Payton-Bennett nods frantically. Amy looks befuddled. “There you have it. See you later, Amy.” I take Aria’s hand and stalk out of the building.

Within seconds, Aria and I are back in the Lexus. Devon, who can sleep anywhere, anytime, startles awake, yawns, and pulls the driver’s seat back to an upright position. Then he looks at my face.

“Everything okay?” he asks.

“Wanna talk about it?”

“Not even a little bit.”

“You have no idea how ready.”

Ten minutes into the drive home, I hear a rare sound; Aria casually talking to someone or something other than me or Devon. Just in time, I refrain from whipping my head back and staring, and surreptitiously adjust my rearview mirror instead. Aria is carrying on a very one-sided conversation with her llama. “And then Mommy said, ‘This is the situation’ in her mean voice, and the bank man looked scared.” She shakes her head at her enthralled companion. I see Devon’s lips twitch out of the corner of my left eye. “Mommy didn’t like the bank man, but the bank man didn’t like her first. And he didn’t believe it was Mommy’s money.” She pauses for a beat before whispering to her confidant, “I was nonplussed.” 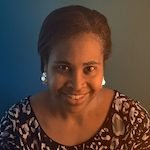 Colette Parris is a Caribbean-American graduate of Harvard College (where she received a bachelor’s degree in English) and Harvard Law School. Her work can be found/is forthcoming in Lunch Ticket, Thin Air Magazine, Burningword Literary Journal, and FreezeRay. She lives in Westchester County, N.Y. with her husband and daughter. Follow her on twitter: @colettepjd.