I stared at the thick frosting of the cake, dotted with rainbow sprinkles, wondering if this would be what made him sick. I’d messed up the recipe, not realizing that “pasteurized egg whites” were different from just regular eggs that you took the yolks out of. So, the buttercream frosting included a decent amount of raw eggs. I’d already spent every day since his birth worried he would get sick. Today, on his first birthday, I worried the cake would be the reason. When you’re born in a pandemic, death seems as likely as life.

The labor started in an instant just after midnight on March 15th, 2020. My husband and I sped through the empty streets of New York. The city was in the process of shutting down. We arrived at New York-Presbyterian hospital where my husband rushed me to labor and delivery. I refused to go through the ER as suggested, afraid of what I might encounter there. We didn’t quite understand what was to come but were slowly realizing that we were heading into something bad. Really bad.

My son was big for being six weeks early. He arrived screaming with a head full of black hair. I was able to hold him briefly before he was taken to the NICU. When we were reunited a short time later, he was unrecognizable to me. I whispered through tears “that’s not my baby” as my husband wheeled my chair closer to the enclosed bassinet. The baby there was attached to so many wires, there was a giant hose hooked up to his nose, a pacifier taped in his mouth, his eyes were swollen and starting to bruise. My husband looked into my panicked eyes and nodded slowly. “It is.” My head shook side to side in disbelief as sobs erupted from my chest.

The next two days passed in a blur of medical speak. My baby’s lungs were underdeveloped. His breathing and heart rate were erratic. I felt like I was endlessly hooked up to a pump, trying to coax my milk to come in. It was the one thing I could do for him. Make milk that he couldn’t even drink yet but would be put on a Q-tip and swirled on his dry lips and wiped inside his mouth. I often stared at him in disbelief, afraid of touching him or hurting him or doing something wrong. I longed to hold him, to comfort him, to tell him his mama was right here, right here.

He had a chest tube put in on the day I was discharged from the hospital without him. It felt like the cruelest twist of fate. All I wanted was to quarantine at home, but I wanted my baby home, too. Leaving the hospital was the hardest moment of my life. I sat in a wheelchair waiting for our car. Two women nearby held their own bundles of joy. Not too close—my husband was thoughtful enough to move me away from them—but close enough that they could hear my muffled wailing and see the despair dripping out my eyes. I felt like I’d failed my baby. That I could no longer keep him safe inside my body and instead was leaving him at this quickly crowding hospital with god knows what floating in the air.

As my anguish escalated so did the city’s pandemic. The nurses were talking about changing protocols; only one parent allowed at the bedside at a time. Then only one parent allowed to visit period. We were told to prepare for a full lockdown of the NICU – no one in or out. The idea of being kept from my baby was more than I could bear.

My husband and I took turns going to the hospital, privileged to have a car we’d purchased just before the pandemic. The first time I entered alone, still recovering from the birth, a security guard asked if I’d like a wheelchair. “Yes,” I responded. “Do you have someone to push it?” Of course not. I made my way gingerly through the hospital halls and up to the NICU on foot.

I feel like I’m mourning him and yet he’s alive. He just isn’t here. My brain can’t reconcile these feelings. Did I have a baby? Does he exist?

I wrote those words in my journal on March 28th, 2020, nearly two weeks after my son was born. There has been a myriad of news coverage on parenting in the middle of a pandemic, all of us isolated and collectively miserable. Whether it’s Zoom school, or lack of childcare, or death of friends and family, we’ve all had our share of traumas. Those of us with NICU babies were simply dealt a double whammy. Pre-pandemic research suggests as much as seventy percent of moms with NICU babies experience postpartum depression. Since the pandemic, more than one in three postpartum women surveyed by Brigham and Women’s hospital had clinically significant depression. An article last fall found that COVID-19 hospital restrictions are separating parents and NICU infants more than before the pandemic. Add those factors together and it’s no wonder NICU mothers are struggling more than ever.

For me, it took a social worker, the hospital’s chaplain, and the director of the NICU coming to the bedside and inquiring about my feelings to prompt a call to my therapist. “I think they think I’m not ok,” I told her. They were right.

In all, my son spent three weeks in NICU at the height of the first COVID-19 wave in New York City. We brought him home on April 5th – when the city was hitting 800+ deaths a day. It felt like a miracle to be home. We didn’t leave for a long time. I couldn’t fathom leaving the apartment. Like it was for so many in the early days of the pandemic, going to the grocery store was terrifying. Walking down the street was nerve-wracking. Each time my husband wanted to go out for something I second guessed it. Was it necessary? Was it essential?

As the months passed we debated leaving the city, like so many others had. But where would we go? Our families were hundreds of miles away. The doctor’s appointments for a newborn come every few weeks. We were stuck, cocooned inside our apartment, hunkered down together. The days blended together until suddenly our newborn wasn’t a newborn anymore.

Each milestone my baby hit was a reminder of how much time was passing. His first smiles coincided with the flattened curve of the first wave in New York City. His first foods, as we headed into the second wave. His babbles and crawling went right along with our missed holiday traditions.

We’ve all endured this “lost year.” But what happens when it’s your first year? There are so many moments I grieve for what we didn’t get to experience with our son. Mostly it involves family time, the rituals of get-togethers and holidays. But also the little things in our privileged life we took for granted, baby music classes, or swim classes. Meeting other new moms in person, to laugh or cry or ask, “Is your baby not sleeping, too?” Building that village that it takes to thrive in the first year of life was simply another opportunity lost to the pandemic.

While there’s so much that we’ve collectively lost, there’s also so much that I’ve learned in this time. In the grieving that I’ve done for my son’s first year, for all that he missed out on, we were also given so much. When I look back through all the doom and gloom I see slivers of magic. Banging on steel wine glasses at 7 p.m. while the city cheered for healthcare workers and the woman across the street belted out “New York, New York.” Watching our toddler hold his baby brother, then teach him to wave. Having more time with both parents around, tackling bedtimes together and having impromptu 80s dance parties. Simply noticing all the things that we used to take for granted.

A year later, I’m doing OK again. I’m coming out of the fog. While everything seemed to pause from last March until now, the little life that came screaming into the world was growing and thriving despite it all. He’s pulled me—begrudgingly at times—forward. To just keep living and putting one foot in front of the other. And that’s why when we set up the family Zoom session for his first birthday, I went all out. Balloons, the homemade rainbow cake. I wanted it to feel like normal, even if normal is still off there in the distance, somewhere. This baby is here now. And he’s a constant reminder of how much has changed, how much we’re missing, and how much joy is still to come.

So, we took the risk. We cut up that rainbow cake and ate it. It was delicious. And no one got sick. 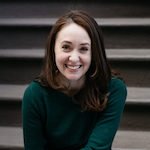 Jamie Farnsworth Finn is a freelance writer, content strategist, adjunct instructor at the University of Delaware, and head of content for M.T. Deco, a multidisciplinary digital agency. Previously, she produced for NBC News and CBS News. She lives in Manhattan with her husband and young sons.