I’ve had the honor of officiating many weddings over the past two decades. They’ve all been beautiful in their way, but more often than not the vows exchanged have been—naive, to say the least. I know mine were. That’s because for most couples these usually aren’t really marriage vows, they’re wedding vows: tidy little phrases designed for a filtered photo album ceremony—not for the messy, meandering, disorienting experience that is sharing life alongside another person.

Based on twenty-five years of marriage and on my time counseling couples before, during, and far too often following their marriages—these are some honest vows I’d like to hear people share with one another on that day, to prepare them well:

to have and to hold from this day forward,
in sickness and in health,
in the scars on our hearts from previous relationships,
in the invisible baggage we’ve carried since childhood,
in the unrealistic expectations we’ll have for one another,
in the wild eccentricities of relatives we’ll inherit,
in the specific neuroses we’ll have to carry for each other,
in the cutting words we’ll speak even knowing how much they’ll hurt,
in the emotional distance that will sneak up on us,
in receding hairlines and expanding waistlines,
in disastrous vacations that we can’t afford to begin with,
in changes to one another that will challenge us,
in unceremonious firings and career disasters,
in unlikely victories and unexpected joy,
in dreams and plans and paths that will diverge,
in times when we’re on top of the world,
in times when we’re hanging by a thread,
in countless treasures we’ll find hiding in the ordinary,
in quiet resentments that we’ll let fester too long,
in the way we’ll memorize the lines on one another’s faces,
in leaving each other the last cookie,
in personal sacrifices we can’t imagine we’ll one day have to make,
in pregnancy or infertility or miscarriage,
in defending one another fiercely,
in middle school projects we’ll hear about the night before,
in late night pipe cleaner runs to the grocery store,
in opportunities we’ll miss for one another,
in bankruptcies and failed businesses and poor investments,
in hands we’ll hold through inconceivable grief,
in the things we’ll do that will one day drive each other nuts,
in the times we’ll do those things on purpose because we know,
in learning how to push each other’s buttons,
in choosing not to push them,
in midlife crises that will appear early and repeatedly,
in impulse buys and odd fashion choices we’ll make as a result,
in hot sex and the times when it isn’t so hot—or existent,
in the billion holy moments that we alone will share,
in frantic, middle-of-the-night rides to the hospital,
in the fitting together of our bodies when we embrace,
in forgiving stuff we’ll never dream we’ll be able to forgive,
in the space we’ll make to let each other’s guard down fully,
in the time we’ll waste staring into phones while we’re together,
in the arguments we’ll have when we’re really angry at someone else,
in the candy we’ll hide from our children,
in the candy we’ll hide from one another,
in the flatulence we’ll each blame on the dog,
in the comparisons we’ll sometimes make to other marriages,
in flirtations with people that we should avoid but won’t,
in the times we’ll pine for the greener grass,
in the times we’ll realize it’s beneath our feet,
in shit hitting the fan,
in cleaning it up together,
in the changes we won’t see coming,
in the diagnosis we won’t see coming,
in the approaching car we won’t see coming,
in a vomiting kid on a road trip,
in a second vomiting kid on a road trip,
in gladly losing the rental car deposit,
in the way we’ll fight with one another,
in the way we’ll fight for one another,
in so many things that would terrify us today if we knew we’d go through them,
in the wild, exhilarating, sacred, painful working out of a marriage that won’t look like another that has ever existed on the planet, and one that we’re going to hold tightly to with everything we have—

Until death do us part.

This is my solemn vow. 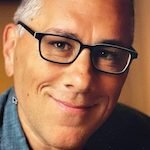 John Pavlovitz is a writer, pastor, and activist from Wake Forest, N.C. Over the past five years his blog, Stuff That Needs To Be Said, has reached a diverse worldwide audience. A twenty-five-year veteran in the trenches of local church ministry, John is committed to equality, diversity, and justice—both inside and outside faith communities. His books include A Bigger Table, Hope and Other Superpowers, Stuff That Needs to Be Said, and If God is Love, Don’t Be a Jerk. His website is https://johnpavlovitz.com/.