Our house, built in 1738, stood in the middle of twenty acres of corn field. The hand-fitted Pennsylvania blue-gray fieldstone walls were two feet thick. George Washington used it as an infirmary for his troops during the Revolutionary War and their blood stains remain in the wide plank floors today. The walls were not thick enough to keep out the world’s contumely. The airwaves carried in news of the assassination of Dr. King, American war crimes in Vietnam, and the violent 1968 Democratic National Convention protests, and no mention of the Valium (diazepam) epidemic. Yet life was still pleasant in the old stone house and I did nothing to change the world but grow my hair long and sew paisley patches into the legs of my jeans to widen them into bell bottoms. There was a particular year my family lived there that I dubbed The Year of St. Elmo, the patron saint of sailors and those with stomach ailments, whose intestines were wound on a windlass to torture him into praying to pagan gods. On a cold day in late fall, I came home from college and my mother stood shivering in the rain in the middle of the apple trees in her nightgown praying to Odin to save her from snakes hanging in the branches.

She pointed at the branches. “Don’t you see them?”

I took her inside and helped her into bed and called my father at work and said she was sick and come at once. I told him what happened. He got home in an hour.

His eyes bulged from their sockets when I repeated what happened. “There is nothing wrong with your mother. Nothing.” He stomped his feet on the floor of the hallway leading to their bedroom, so that the planks, loose on their hobnails, rattled. He slammed shut the door.

She swallowed a bottle of Valium in December. When I got home from class, she lay in her vomit, unconscious. I picked her up and put her on the bed. My sister, Julia, called the ambulance. They pumped her stomach in the hospital. She was returned to us three days later.

A weight pressed upon me that grew heavier each day. Numbness spread through my body. I could not sleep. If I tried to read a book, the words held no meaning. She swallowed a bottle again in April. A third time in August. The numbness penetrated deeper and I felt like lead and did not want to move.

In September she was taken to Pineland Behavioral Center and that is when the St. Elmo’s Fire came. It was a clammy night with heat lightning flashing. The smell of rain was in the air. My sister, Julia, was in the kitchen with a friend. They both saw it and started yelling. An undulating blue light drifted through the screen door and floated into the dining room, gathered itself into a ball and rolled down the hall. At the sound of their shouting, I ran down the stairs and into the family room in time to see it pass through the side entrance door. I followed it outside and stood by my car parked alongside the house. It climbed the copper lightning rod that ran up the stones from the ground up to the rooftop. The fire perched on the spire, hissing. Blue snakes writhed from its rim and a violet glow spread over the roof. Then rain gushed all at once and plastered my shirt to my skin. Lightning flashed upward from the spire into a cloud overhead and the Corpus Sancti extinguished.

She came home from Pineland in October. I went to her bedroom where she spent most of her time. As the sun sank its light passed through swirls in the blown glass windowpanes, breaking up on the white plaster walls in faint ripples of color.

She wore the same nightgown as the day she pleaded to Odin by the apple trees. She watched the ripples moving up the wall as the sun dropped. “Do what?”

“Try to kill yourself. Is it because of me?”

“No,” she finally said through her Valium dream. “I did it once for each of my children. Because of my disappointment with them.”

My brother, Chris, younger than my sister and I, was not present at her suicide attempts, and was never told about them until I brought it up shortly before he died of cancer. I had always assumed my father had told him, but he had not. I regret the hurt I caused him.

It is said that lightning never strikes twice in the same place, although the opposite is actually true. I waited for St. Elmo by the kitchen screen door on hot clammy nights, hoping a reappearance would dispel the diabolical effluvia that hung over us. Years later my mother was taken off Valium by her physician and prescribed OxyContin (oxycodone) for her debilitating headaches. The doses were gradually increased, aided and abetted by the physician, my father, and a Cadillac insurance policy. A few years ago, she tried to stop the narcotic on her own and became extremely ill. She is determined to get off the Oxy and is working with her doctor to avoid withdrawal. She is almost there. At age ninety-four she remembers little of what happened and is relatively happy now.

After my family moved out of the old stone house the new owner had the antique lightning rods removed. The house was struck by lightning and partially destroyed by fire. 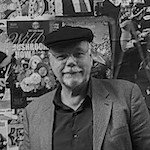 J. Thomas Brown lives in Henrico, Va., and has co-produced local TV writing shows and coordinated poetry readings at the Richmond Public Library. His short stories and poems have appeared in magazines and anthologies. Other works include Saint Elmo’s Light: Collected Short Stories of J Thomas Brown, Driving With Poppi: A Patremoir, Mooncalf poetry collection (in audio and print), The Hole in the Bone, and Land of Three Houses. A futuristic novel is in progress based on the Hayflick Limit and immortal HeLa cells. The story is told by someone 450 years old.