Artist Robin Harris loves to paint, focusing on fluidity and “gastronomic whimsy”—oversized, vibrant paintings playing with images of food and drink, dropping, spilling and splashing in all directions. Her high ceilinged studio delights the senses with paintings of fresh fruit and ice cream cones, newly poured Manhattans and a lemon    twist balancing on the lip of a margarita.

Eschewing a sweet tooth, Harris says she is drawn to the upbeat colors and movement in liquid and culinary subjects. “They don’t stir up strong negative emotions. I’m not making a political statement. I don’t have any desire to do something gloomy. They’re very happy. They remind me of my childhood and being joyful.”

Self taught, Harris is a graphic designer by trade. A native of Fair Lawn, N.J., she now lives in Charlottesville and is an artist with the McGuffey Art Center. A decade ago she took a studio class in realism at the Torpedo Factory in Alexandria, Va. “I wanted to learn textures—how to do marble, wood and fabrics,” she says. At the time, Harris had a client who made sorbets and she enjoyed designing concepts for their photo shoots. “Subconsciously, I also created a painting of lemons with its drips and splashes. The splashes were fun and I enjoyed the moment of it. The movement of it. I wanted to go further.” She was on her way to painting food and drink, larger than life with motion and color at its core.

“I didn’t want anything static,” she says. “I’m looking for tactile emotion beyond the staid image of a still life. My goal is to completely capture the viewer’s attention enough that they become caught up in the moment, sufficiently engaged that the results of movement are fully imagined.”

Harris manipulates the subject, allowing the observer to complete the actions that have been initiated. “The viewer becomes a very real part of the process of creating or eliciting an emotional response,” she says.

Inspired by Irving Penn’s frozen food photographs, she was also sparked early by the work of Richard Estes. “When I was young, I was fascinated by his city scenes, especially the sharp, clean reflections. I admire Natalie Featherstone for her mischievous compositions; Eric Wert for his amazing technique and color treatment with water and food, and Kim Tschang-Yeul for his painted water droplets.”

In painting liquids cascading in air, Harris first studies splashes in paintings and photographs. She composites multiple layers of photo images using digital tools (mainly photoshop), creating digital art which she then recreates in acrylics on canvas. “I try to make the digital art almost like the painting. It’s realism so I try to incorporate the shadows and other subtleties while I’m working in photoshop.

“It’s hard to photograph splashes so some of the shots are in my head; they’re fortified images. I take liberties and add my own drops. I’m a surrealist/realist,” she says. “If the image is a little off, it appeals to me.”

Typically, Harris starts with separate pieces that she transforms into a whole. In Hit Me with Your Best Shot, she began with two images of whiskey glasses; altered an image of a tall frothy cocktail, added a strawberry and imagined the spills and trajectory of whiskey drops.

In Red or White (above), Harris began with two glasses of wine and took bits of splashes and combined them together. ”I was a little bored with it so one day decided to stencil a background because I felt it needed something. It was just black, floating a little too much for my taste,” she says.

“As a graphic designer part of my style was to always have a background pattern. I used color on color and I guess I’m carrying that forward.”

Harris is also intrigued with the interplay of various colors and textures. “I had the most fun with the pomegranate. I love the colors, the red. There’s just so much going on in there, between the seed holders that hold the pomegranate and the seeds themselves.”

The texture of rain, says Harris, particularly appeals to her. “It adds movement to what is otherwise static. It’s very relaxing to paint rain drops,” she says. “It’s all about light and shadow. I imagine where the light is going to hit the bubble of water. I look at drops but don’t have them in front of me when I’m working.”

Vivid colors, especially the blue of blueberries, she also finds desirable. Other textures work their appeal, the peppermint stripes and cellophane, for example, in Schnapps, the fish scales and silver server in A Sardine Out of Water, and egg yolks whisked to perfection.

Harris’s silvery sardine on a fish fork is a departure from her popular confections and libations. “I’d never painted a fish before,” she said. “I was challenging myself to get the different tones and textures.”

A Sardine Out of Water is part of a series that incorporate utensils—fish forks, knives, spoons and pie servers. Here the mix of silver and vintage holders add contrast and textural interest.

After completing her utensils series, Harris is considering painting a group of wind up toys, attracted again to their energy and motion. “I’ll use my husband’s collection of wind up toys as my starting point. But I have to incorporate my signature splashes into the painting. I want to do the toys with some sort of splash being involved. The wind up toy is doing something that creates an energy.” 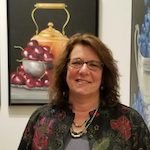 Robin Harris is now working towards a spring show of large and small works for the Touchstone Gallery in Washington, D.C. She has shown her paintings throughout Virginia and the D.C. area.