Bukowski talked about it, the one he threw
through the window each drunken night
and it still played, a radio indestructible
with songs that couldn’t help but bead
against my forehead. I think of Johnny Rivers,
honeyed in his tenor and hair, the way
he sweetened even “Secret Agent Man.”
Edgar Allan Poe sat with Bukowski
throughout those drinking sessions. What-
ever he poured down his gullet had
to burn like being tied to a stake, when
the Raven began talking Plutonian shores.
As a young man I remember summer
nights of cheap vodka, descending
with a friend to the cellar, where
we waited out the dawn to bust
into song in my yard. With first rays
we moaned like Cat Stevens. My father
still alive and younger than I am now,
we swirled our vodka with heavy cream,
as we headed off, trying to learn how
to become men; the radio with its guts
removed on my father’s bench, wiring
to be rewound, tubes to be replaced.
Here was the Philco that reposed
on its shelf, one that Bukowski might
have thrown through his window,
all in its magnificence of old parts;
a radio that never worked my whole childhood,
though father would disappear down the stairs
to putter with its guts to make it sing. 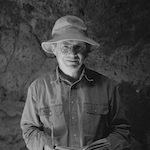 Russell Thorburn is a recipient of a National Endowment Fellowship and the first poet laureate of the Upper Peninsula of Michigan. He lives in Marquette, where he sometimes performs with his sextet Radio On, which creates experimental soundscapes using spoken word and fictional narratives. His last book of poetry was Somewhere We’ll Leave the World, Wayne State University Press, 2017.