In the small Appalachian town where I was born lived a squat, bowlegged, hairless doctor. Some called him a quack and a dope fiend, but in 1954 he delivered me on his dining room table, spanked me ‘til I cried, and thirteen years later laid his cigar in an ashtray as his flabby fingers probed my pubescent neck while he peered through Coke Bottle lenses down my throat, past my recalcitrant tongue, exploring the mystery of vocal cords that refused to function.

I cringed at his questions, so on point that I wept, as one by one, my mother’s negative responses laid bare my adolescent anxieties: “Does she menstruate yet?” (No.) “Things okay at school?” (Well, she won’t talk . . .) “Is there a boy in the picture?” (Not that I know of.) “Does she have friends?” (Not since Vickie Lyons moved away.) “How’re things with her and the new stepdad?” (Oh, . . . they’re still gettin’ used to one another. It’s only been four months.)

Gazing through tears into the dense, distorted lenses of his spectacles, I saw them: the mean kids from school. The same classmates I’d had since first grade, but different this year. Hateful. Snooty. As if over the summer they had collectively opened their eyes and seen the real, inadequate me for the first time. As the doctor probed and murmured “Mmm-hmm, Mmm-hmm,” they elbowed and shushed one another while ridiculing my scarecrow limbs and rummage sale sweater, and worst of all, mocking the way I spoke into my hand to conceal the decaying front tooth that wrecked my smile. The tooth we couldn’t afford to fix, but by God they would have their cigarettes, her and old Dwayne.

Reflected in the doctor’s lenses, the room was awash in a bloody swirl as my silent, ferocious scream mowed the bullies down like the M-2 Carbine that old Dwayne kept in a locked cabinet in the basement, a souvenir from Vietnam: rat-a-tat, rat-a-tat. My mother flinched and cleared her throat, clutching at the fabric of her skirt as her eyes darted about like nervous mosquitoes.

The doc paused his inspection and took a drawn-out drag on his stogy. “Hmmm. Could be iron deficiency. Or maybe,” he said, with a wink at my mom, “the girl’s just got nothing to say.” I sucked in my breath when he added, “But that front tooth needs some work.”

When Mother flushed and commenced to hem and haw, he interrupted her. “Old Tom Pender takes charity cases. Tell him I sent you. He’ll fix her up, pretty as a picture.”

When I absently murmured, “Sure, why not,” they exchanged silent, startled question marks and my mom breathed, “Oh . . .”

The doctor chortled, then wriggled his hands in the air like Reverend Horton possessed by the Holy Spirit. “Praise the Lord, I’ve done cured the girl, don’t you see?”

“Say something else,” Mother pleaded. The hope in her eyes matched the hope in my voice as I complied: “You really think that dentist can fix my tooth?” 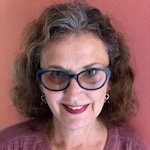 Peggy Schimmelman lives near San Francisco with her husband and a neurotic cat. Her work includes the poetry chapbooks Crazytown and Tick-Tock, along with two novels, Whippoorwills and the forthcoming Insomniacs, Inc. She is co-author of two Wild Vine Writers anthologies. Her work has appeared in North American Review, Flash Fiction Magazine, Haight-Ashbury Journal, Pacific Review, Comstock Review, Wild Musette Journal, 100wordstories.org, and others.

One thought on “Speechless by Peggy Schimmelman”