Hey, son. It’s your Mama. Hope y’all are doing good up there. I’m callin’ cause I’ve got a little problem here.

So, did you hear about that storm we had a couple days ago, that derecho? Well, none of us had ever heard of one before, either. It was a perfectly nice day and then the wind starts a blowin’ and sounding like a big ‘ole freight train. The trees in the front yard were all bent over double. I’m telling you, it was like the end of days—I never heard such a noise in all my life. I was so scared I ran to the crawl space, and you know how much I hate them spiders. Well, luckily, none of the trees fell on the house, but there’s a heap down out back. They’re sayin’ it’ll be at least three or four days till the power’s back on cause it snapped the poles right in half. What a mess. Nobody can get anywhere around town.

I’m fine, got me some bottled water, the gas is still on, so I can cook. I walked over to Aunt Norma’s today, she’s got that generator, so at least she can flush the toilet. The Tate boy from next door is comin’ over with his chainsaw, so I can git the car out and go to the grocery store.

So, son, now, here’s the problem: I got me four dead cats in the freezer. I think we all know what happens to things in the freezer when the power’s out.

Okay, I know you’re thinkin’ I’m a crazy old woman. But here’s the thing—it’s a big freezer! You know, it’s that one your dad got when he bagged those two eight-point bucks that year.

What happened was, you’ll remember our cat, Danny Boy? The one Daddy found down the drainage ditch, I don’t know, you must have been, what, eleven or twelve? I never liked cats much, but, well, you get attached. There must be some kind of cat hotline out there cause once you got the one cat, they just keep on coming.

Anyway, it was right around the time Daddy died, you know, he fell over on that Monday and then we had the funeral on Friday, and I had to get rid of all them oxygen tanks, and shower chair, and such, and I was ‘bout wore out.

Well, just the next week, I accidentally ran over Danny Boy with the tractor. I wasn’t so familiar with driving that thing, and he must have gotten under the wheels somehow, and I just happened to look back and saw this white thing layin’ there in the red dirt, and you know, at first I thought it was one of those plastic bags from the Food Lion. But then it was Danny Boy. I cried like a baby. And, well, I just couldn’t face burying another thing right then, so I wrapped him up in one of Daddy’s old Southern States t-shirts and thought I’d just put him in the freezer for a bit. Well, then the black cat, Cassie, died and I thought maybe she’d like to be with Danny Boy. And then the other two, well, if I wasn’t gonna bury the first two, how could I bury those two?

So, I’m needin’ your help. I don’t think I’m able to dig four cat graves by myself in this heat and all, and I need you to come down here and help me. Can you do that? And bring those grandbabies with you. Call me back. Night, son. Love you. 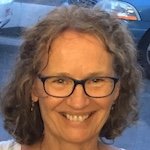 Christine Tucker is a retired clinical psychologist who lives in Charlottesville, Va. Her short stories have appeared in Asterix and Inscape Journals. She is an MFA candidate at Queens University of Charlotte and currently working on her debut novel, Kinship.

One thought on “Cats by Christine Tucker”