Having been interested in both visual art and writing/poetry since I was able to pick up a pencil or paint brush, it seemed natural to eventually want to combine the two somehow. In the 1980s, I began exhibiting work with a visual art piece and a companion poem together. Then in the 1990s I started stenciling words together with the visual elements. In the last twenty years or so I have endeavored to combine entire poems with a visual element, sometimes two or more poems are meant to work with a single image.

I have developed a creative way of working by utilizing my poetry within my compositions, which are then rendered in pencil. The narrative work I am doing now has many layers of meaning, which I illustrate by projecting altered found images and then meticulously rendering the composites in colored pencil. I am interested in language and in using symbols from popular culture, myths and fairy tales.

I will say that Marcel DuChamp has been the most important artist for me. My five-panel painting Cataract is in part an homage to him and to his final work Etant Donnes. (Given). I wanted to preserve the conceptual element of his work and add to it both spiritual and emotional dimensions.

The idea for Cataract is to mimic the children’s toy—the Jacobs ladder-—where flat blocks held together with ribbon flip-flop, apparently fall like a waterfall, but in fact remain in place. In as much as “Cataract” uses the Jacob’s ladder as its model, the work is playful, which is certainly an element of DuChamp’s oeuvre.

I chose an image of the Statue of Liberty and represented it somewhat like a neon artist, although more detailed. Moreover, that image is seen as though looking at it from behind with the image painted on glass. DuChamp’s Large Glass—The Bride Stripped Bare by Her Bachelors Even-—allows a similar experience but in my rendition you simultaneously view the work from the front and from behind. This I do to reinforce the ambivalence I want to communicate and to confront the viewer with the illusion of space itself. Ambivalence is an important quality in my work since it is this very quality that rests at the heart of the experience of being human.

I have a long-term interest in Niagara Falls because it represents an instance of my version of the Hegelian principle of dialectics. In my version, the grander and more magnificent something is, the more likely it will be assimilated into lowest common denominator culture and thereby stripped of all its wonder. And yet, ambivalently, some of that wonder is still somehow communicated. The five panels form a cross in this work which I wanted to suggest that the principle could be vaulted into another reality or dimension, perhaps a fourth dimension. The fourth dimension was one of DuChamp’s many interests.

The two panels that flank the central one horizontally are two halves of an image I took from Life magazine from the 1940s of three vacationers at a seaside resort “frollicking” in the surf. Closest to the viewer, a woman runs out of the surf to the beach. She holds her neck as if she has just been struck with something, perhaps a seashell or a rock. Further back, a man stands knee deep in the ocean and glares menacingly at her as if just having successfully struck her with his missile. The other woman is being struck by a wave and seems to be barely able to stay on her feet. I have used this image repeatedly over the years, and named the woman—”The Bather Who Runs Eternally Backwards.”

The three figures represent the three possible positions a person can take in this world: 1. The Perpetrator, 2. The Victim, and/or 3. The Innocent Bystander. Sometimes one may find oneself in all three roles at once. An image of a tightrope walker is perched on a ladder as the upper panel. To this person, I have given my face. I am not exempt from the human situation.

Finally the poem acts as the “ribbon” for this particular Jacob’s Ladder. It is a horrifying account of family disempowerment and dismemberment. It ties the “blocks” together. Finally, the title Cataract can ambivalently mean either or both 1. a waterfall and/or 2. a condition of the eye that prevents seeing.

My images, by and large, are culled from familiar sources, typically in the 1950s and ’60s, and are then recontextualized. I feel it’s best to start with something familiar—“known”—since I’m asking myself and the viewer/reader to examine something about ourselves that may very well be completely alien. I like to think of it as a problem someone from the North pole might have describing snow to a person from the tropics who had never seen or even heard of such a thing before. How would you communicate your experience of snow?

I am asking myself:

To the viewer/reader I ask, “Where is the body? What is the body for?”

The reimagining of time and space, and one’s relationship to these elements in our perception, is a central preoccupation throughout my work. In one piece the image simultaneously moves forward and recedes. In another you are both inside and outside the same train. The central figure in another drawing can be seen to be either in an illusory or a real world, moreover it is questionable which world is which.

Formally I have set myself the goal of finding ways to get the visual and textual elements to relate both contextually and compositionally. Thus, for instance, the image may represent the experience of a split mind and the poem may reiterate that both as a description of my own experience and by being literally split in half.

I try to invest the work with as much ambivalence as possible to reinforce the sense and experience of the split mind. We don’t think it odd that we both love and hate, that we can have plenty or not enough, that we can be either sick or healthy. These and many other continuum arcs are generally accepted as “the way of life.” I expose this as a projection. 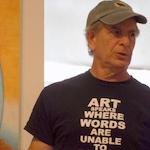 Ten years ago, Peter Allen resumed his art and design career after years of supporting his family as a carpenter/builder. Since retirement, he has had major solo shows, including several themed shows at McGuffey Art Center in Charlottesville, the Shenandoah Valley Art Center in Waynesboro, Va., and invitational shows in Baltimore, Md., Syracuse, N.Y., Brooklyn, N.Y., and the Taubman Museum in Roanoke, Va.