It’s a drizzly-gray day in the spring of 1966. I stroll out the back door and climb into my dad’s Thunderbird with minutes to spare as I wait for my family. Like any eleven-year-old, I rummage through my father’s console hoping to find Clorets gum, or maybe some pipe cleaners. But lurking in a bunker inside of me is a tangle of hope and dread that I will also find a clue.

Below the passenger seat—a throne upon which a third child is not privileged to sit—I find a black and white speckled notebook with the name Kathy Raven scripted in tidy cursive.

I know what this name means. It’s the name my mother spat during one of her late-night rants when my dad arrived home with lipstick on the collar she had starched. The name that at once indicts my father and threatens to dismantle my home and family. The name I had swept from my mind onto a dustpan of unbearables—willing it to vanish.

But the name returns—as our unbearables do—and my sadness is abysmal. The name stares up at me—the curve of each letter steered by her hand. I stare back—my only image of her—the one who slashed the fabric of our family—a splay too wide to mend.

I shove the notebook under the seat where I found it and climb into the back. My siblings file in the car, my mother enters last. I feel the prickle of panic and have only seconds to decide what to do. Too young to know the answer, I’m old enough to know my choices. I could declare what I found as we back out of the driveway—to punish my father and watch him squirm. I imagine how my mother’s shoulders would wilt and how her eyes would sink into a moonscape of sadness. Or—I could let the moment pass, pushing my anguish down into my gut as I feel the swell of its cumulus. Torn between exposing him and protecting him, I choose the latter and swallow the grenade that would have ripped into my family, unsure if my decision is noble or feeble.

As an adult, I understand what losing my father meant. Children drift to the love source they deem most accessible. For me, that was my dad. My mother was sickly and sad, spending entire days in bed—a nagging gloom muffling maternal interest.

My dad’s presence was less frequent but offered the solace that he noticed me—a rushed hug or an attempt to make me laugh as he ran out the back door—his man shoes clapping the tile floor. I feared that if he were brandished from our home, the love he accorded me would leave with him. The love that we both chased.

I turned my focus to my dad, believing that my job was to protect him and uphold his secrets. In return, he’d pay me in brief installments of love. A contract I was too young to understand, yet instinctively followed its terms. I now question the root of my belief that parental love is up for barter.

Months later, I arrive home from school and follow the muted sounds coming from upstairs. Behind the closed door to the attic stairway, I hear my mother sobbing to the party on the other end of the phone—its coiled cord trapped in the door frame. I try to decipher the words she pleads. “Please stop your daughter—please! I have four children.”

I now ponder the desperation my mother felt, facing a future of single motherhood—less common in the ’60s. The burden of home and children would fall to her. Another hundred pounds atop her languid shoulders.

I stand numb and silent behind the closed door, feeling the plummet of all that felt safe in my world. I notice our thick, unwieldy phonebook open to the letter “R” and follow the names with a trembling finger until I find it—Raven. I know what I need to do.

My mother’s depression coupled with my father’s absence had schooled me in resolving my own matters. I took cabs to birthday parties after foraging pennies to pay for the ride and a paltry gift. I rode two city buses downtown when I needed shoes, landing in the red-light district, on a frosty, dark night—just ten years old.

I would blame myself for poor decisions—getting lost on city streets or arriving at a birthday party on the wrong day—fueling a lifelong feeling of less than.

Standing over the phonebook, I scrawl the address on a corner of the page, rip it off and robotically walk downstairs to retrieve an empty shoebox from the trash. I grab my mother’s carving knife and a dishtowel and pack them in the box with the address.

In my trance-like tasking, I remember feeling that this problem was mine to solve—and I needed to do it with haste and finality to save my family. Perhaps an adolescent sees no other egress from suffering than one which is permanent.

But I was the sensitive one in the family. I rescued spiders trapped in the bathtub and aligned my stuffed animals in positions that assured their comfort. On Easter, I couldn’t bear to bite into chocolate that was shaped like a bunny—too violent an act.

As minutes passed, the plan in my head morphed from one of hurting her—I knew I couldn’t—to one of ringing her doorbell, holding the knife, and screaming, “Stay away from my father!” as I melted into a puddle of sobs. Maybe shewould understand my pain and act on my behalf where others hadn’t.

I walk into our front room that we refer to as the sun porch—rectangular in shape with checkerboarded windows on three sides covered by a silkscreen of sheared drapery. A couch on one end, and a TV atop a wheeled cart on the other. It’s a room where you mull things over as thoughts race to the steady stream of cars on our busy street.

As I stand facing traffic, an awareness drifts past my barrier of denial. My eleven-year-old logic tells me that my father must love Kathy. His prior romps earned no name or deeper presence in our family. Kathy is the one he cannot surrender, and to destroy her—no matter how feeble an attempt—would destroy him. I wipe my face and walk the shoebox back to the trash.

My parents separate off and on for the next two years. My dad is part of our household one week, then gone the next. Unsettled by not knowing, I seek clues that help me track his whereabouts. I check the bedroom closet for his shoes—the drawer that holds his boxer shorts—the bathroom cabinet for his razor.

One Saturday morning, I amble downstairs ready to play with my best friend. Halfway down I see my dad’s suitcase propped against the front door. My mother’s rant tells me she’s the one who packed it—the heat of her anger melding into the fabric of his clothes. My love source is leaving, and I don’t know where to pack my grief.

My father moves back into our home. Weeks later, I wake in the wee hours to the sound of them fighting on the other side of my bedroom door. My mother crying, accusing, beating. My father corralling, cajoling, denying. On my side of the door, kneeling on my bed, I rock and sob in open-mouthed silence—a string of anguish cascades onto my nightgown. My younger sister sleeps in the same bed undisturbed.

My dad denies infidelity to my mother until she thinks she’s going mad. She follows him in her car one evening as he leaves the house.

I imagine the route she drives, the stores she passes, the desperation she feels as she lurks a few cars behind. She parks across the street from the apartment he enters and waits what she gauges to be the precise amount of time. Like me, she chose a standoff.

With a trance-like gait, she walks to the front door, smashes her hand through a pane of glass, barges in, and catches he and Kathy in bed. My mother stands before them with blood oozing from her hand as she hisses, “You bastard!”

The next day, gesturing to her gauzed hand, she relayed the story to us—her three eldest children. She didn’t calibrate information for age or readiness as she lacked the stamina for singularity. I was four years younger than my brother and unable to rise to his metric of maturity.

My innate sensitivity irked my mother. She saw it as weakness. I had to hide in closets and under covers to release my grief—years later realizing that the release is what galvanized me. To liberate our grief is honest and restorative, denying it destructive. I wish I knew that then and could defend myself to her.

Weeks after the divorce, my father pulls into the driveway on a Sunday—his custodial day. There she is—perched on the front seat—already outranking me. Kathy is pretty and blond with a freckly schoolgirl face that I wasn’t prepared to see. My siblings file into the car ahead of me. I try to smile but my mouth only contorts. My instincts steer me to protect him and adhere to our contract. But before we reach the end of the driveway, my alliance crumbles, and I begin to sob beyond my control. My siblings mock and jab, trying to silence me. I catch my father’s glance in the rearview mirror—a soft mercy in the fold of his brow.

Looking back on the brokenness of our home, I see no perpetrator—only the injured. My parents were marred by my mother’s illness and my father’s infidelities. Their four children—as if chasing butterflies—leaped about trying to trap stray fragments of love.

Twenty years later, Kathy entered my life again—at my dad’s funeral. A courageous act, I thought, to face my mother and my father’s four adult children. Her approach was slow and deliberate. I wasn’t sure who she was. Her form held the swell of age—her hair wired and unruly—as if she raced to keep pace with a life that had outrun her. She stood before me and said, “Susan, it’s Kathy Raven.”

What happened next surprised us both. I reached out and drew her into my embrace. She was, after all, part of our family—woven into our story.

I whispered, “I know he loved you.”

“He loved you too, Susan. That’s what I came here to tell you.” 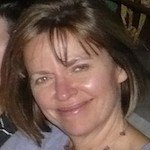 Susan Valas has been a life-long reader and writer. Her life experience has enabled her to connect to readers with a raw and vulnerable presence. She has attended numerous writing workshops at Lighthouse Writers and the University of Denver. In addition to the Streetlight contest, Susan recently won an award for her work from the Denver Women’s Press Club. Susan graduated from the University of Buffalo (New York) where she was born and raised. She has a memoir in progress about raising four sons—including triplets—called Dear Addiction. Susan lives in Denver with her husband and dog, Izzie.