Marie moved her mother Florence into an elder care facility only two months ago, but still got lost trying to find it. It was an incongruously red brick institutional building dropped into a suburban neighborhood of single family split levels and ranch houses, all on tree-named streets like Birch or Willow that formed no recognizable grid or pattern but were rather a random and meandering tangle that was impossible to navigate. She left her house late, and was now even later for being lost, which would add yet another level of tension to this visit with her mother. She knew she was close, but she wasn’t exactly sure where the stupid building was. After passing the same church with the annoying anti-abortion billboard out front for the second time, she made an angry series of last-ditch random turns and was about to give up when there it was, with the circular driveway in the front and a small parking lot on the side.

Still aggravated, Marie turned into the driveway a bit too fast and scraped the bottom of her car on the concrete. She pulled into a parking spot, turned off the ignition, and put the keys in her purse. She smashed the steering wheel with her palms and screamed, “Fuck, fuck, fuck!” as loud as she could. Even though her windows were rolled up, she managed to elicit disparaging looks from a couple walking past the car. “Fuck you,” she whispered, then tapped on the window to get their attention, smiled, and raised both middle fingers.

It occurred to Marie that she always arrived to visit her mother in an angry state. The day of her last visit, her car battery had died the night before. The AAA guy took over an hour to get to her in the morning, and even though he charged the battery, it died again after about two hours. The next AAA guy also showed up an hour late and had the nerve to condescendingly dismiss her story by claiming the previous mechanic would never had done what she said he’d done. After arguing for ten minutes, she had to insist that he replace the battery rather than just recharge it again. He finally gave in, and then just took his time, as if to punish her for challenging him. As a result, she was late picking up her kids at school and was scolded by a teacher ten years her junior as if she was a recalcitrant student who’d skipped detention. She was still fuming when she got to her mother’s.

Today, as Marie got out of the car, she was dreading another fight with Florence who hated the idea of leaving the home she’d lived in for thirty years, the last ten without her husband, Marie’s father, whose death from an out-of-nowhere stroke precipitated Florence’s decline, or so Marie had always thought. As she came around the corner of the building, she saw two groups of families hugging their elderly mothers goodbye on the front lawn. She thought, they all seem to have had positive visits, why can’t I? She took a deep breath, squared her shoulders, and marched to the front door.

Marie cringed at the stinging chemical smell that hit her the minute she entered the building. It didn’t smell sanitary and medical to her, what she imagined the staff wanted families to think, more like death and decay, as if she was the town coroner coming to work in some dank basement morgue.

Marie walked into Florence’s room, and experienced a jolt of panic when she saw the bed was empty. She scanned the room and saw her mother sitting in the easy chair in the corner, looking agitated. The chair was a sickly green color, a plastic fake-leather that Marie imagined was selected because it was cheap to buy and easy to clean. “Hi, Mom,” she said, trying to sound upbeat.

“Where have you been?” Florence spat out. “It’s almost four-thirty. I have to go down to dinner soon.” She was dressed in a flower print dress and that ratty old shawl that she refused to throw away around her shoulders.

“Help me out of this chair,” Florence interrupted. “I want to sit on the couch. And get me a glass of water.” Florence shook her head as if trying to dislodge something from her ear.

“A ‘please’ would be nice,” Marie said. “Ma! Look at me!” Florence seemed not to hear and was struggling to stand. “Ma! I’ll help you in a second, if you just stop. What’s got you so pissy today, anyway?” She walked over to her mother, held her arm and supported her as she stood. Marie thought that Florence felt light as a feather, that she had been losing weight, probably because she wasn’t eating. She set her mother on the couch at the far side of the room, then got a glass of water and set it on the side table. She sat down and took Florence’s hand. “What wrong, Ma?”

Florence picked up the glass of water, took a sip, then spilled half of it trying to set it back on the table. “I saw the doctor, today,” she said. “That jackass!” She looked straight at Marie. “I’m so mad I could spit. I have all these aches and pains, they’re getting worse, so he did a million tests, blood samples, stool samples. How humiliating! He stood there and watched me, okay I’ll say it, he watched me shit!”

“Ma, come on,” Marie said. This was new. Her mother never swore.

“Shit, shit, shit!” Florence said in a taunting way. She smiled for a second, aware that she’s shocked her daughter, then returned to scowling. “And he had the nerve to tell me all those tests were negative. Negative!”

“That’s good news, Mom. What, do you want him to say you have cancer?”

“Is that what you want, Suzie? You want me to have cancer? Everyone’s against me, you, the doctor, your sister Marie who never visits. Everyone!”

This was more than Marie could stand. “I’m Marie, you senile old bat! I’m your daughter Marie, the daughter who comes three times a week to see if you’re okay, to see what you need, to endure your abuse. Suzie lives in Fort Worth, and hasn’t been back here in two years.” She was screaming. “Suzie’s never once visited you here.”

Florence said, “Who’d want to visit a ‘senile old bat’ in this damn place anyway. This hospital or nursing home or whatever it is. It might as well be a crematorium!” She appeared to struggle to speak, and it came out in a hoarse whisper.

Marie felt herself coming apart at the seams. “It’s not a hospital or a nursing home, Mom. It’s staffed elder care.” She decided to ignore the crematorium remark. “You can be comfortable here, be taken care of. Have activities! We’ve talked about this a million times.”

“What’s the difference?” Florence said. “Old people like me, waiting to die, while their kids resent them and can’t wait to put them in the ground!” She started to cry. She wriggled down to the far end of the couch, grabbed the arm rest and tried to stand.

“Stop, Ma. Stop!” Marie said, now crying herself. She hugged her mother and held her tight until she calmed down and stopped shaking. “Ma, put on some lipstick and I’ll walk you down to the dining room. I saw on the bulletin board they’re having roast beef and mashed potatoes tonight. And your favorite—apple pie with ice cream.”

“Ala mode,” Florence said with a smile. She held out her hand and let Marie help her up. 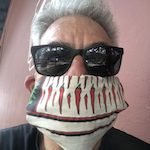 Alan Brickman, when not writing, consults to nonprofit organizations on strategic planning and program evaluation. Raised in New York, educated in Massachusetts, he now lives in New Orleans with his seventeen-year old border collie Jasper, and neither of them can imagine living anywhere else. Alan’s fiction has or will appear in The Ekphrastic Review (November 2021), Literary Heist (December 2021), JONAHMagazine (January 2022), Variety Pack (February 2022), Oracle (spring 2022), SPANK the CARP (April 2022), and the Evening Street Press (summer 2022). He can be reached at alanbrickman13@gmail.com.