The love of a husband for a wife, of my father’s love for my mother, is scattered in my memory like peach blossoms after a spring storm. Sometime in the mid-to-late 70s, my mom—pregnant, and happy to leave the hot production floor of the Bonnie Lane pajama factory in New Bedford, Massachusetts—decided to open her own “beauty shop.” After all, she had graduated top of her class from the LeBaron Beauty School, and had, for a time, rented the best chair at the second-best salon in the small port city.

My father, a sewing machine repair man, highway median strip mower, and inexplicable builder of two-wheeled horse-and-buggy road carts and, later, wardrobes, easily cut out a door in the side of my grandparents’ nineteenth-century farmhouse, added a porch, and carved a wooden sign attached to a post. It hung at the end of a newly tarred walkway that came up from the lip of the front yard, at the side of Route 105. An early memory is running my fingers over the letters carved into that sign and marveling at the crafty care so evident in the effort: Dee’s Salon.

My mother somehow convinced her parents to give up the guest bedroom of their first-floor apartment, above which we lived in an even smaller space. The central thrust of the argument, I would imagine, hung on the fact that they never received overnight guests. I don’t remember them being delivered, but soon appeared sit-down salon hair dryers, a swiveling stylist chair and a small brown sink, with a dip in the rim for the client’s neck. My father—ever the handyman—installed it himself. A giant mirror was placed above it. The bedroom closet was divided in two: one half for supplies, which included cans of hairspray, eyebrow wax, bottles of coloring and permanent solution, and an old metal breadbox that my mother used as a cash register; the other half for the ladies’ coats during the colder months, or for rain-soaked umbrellas and plastic hair bonnets.

Without a penny spent on advertising, my mother managed to pull some of her regulars from the other salon, Tina’s, which, I am sure, is a testament to her cheery personality and sheer skill as a hairdresser. Her patrons were willing to drive out of town into the rural farmland where we lived to either enjoy the unique expertise of “Dee-Dee,” as her devotees called her, or to just stick it to Tina. Either way, my mother was suddenly self-employed and answering to no one, except for the women who sought beauty from her fast fingers.

And any hairdresser worth her curling iron will tell you: once you prove to a woman you can make her feel prettier than she did walking in, only your death will stop her from calling you. And they called and called and called. A husband was taking his wife out to dinner for Valentine’s Day, and she needed the tight curls of a fresh perm. Another platinum blond could see her roots (“I swear Dee-Dee, the humidity makes them grow faster!). A desperate mother needed haircuts for her two boys because she discovered their school photos were the very next day. My mother never said “no,” always fitting them in, even if she had to drive my father’s prized 1978 blue Fiat Spyder convertible on a house call, servicing the busy or infirm.

The salon itself could accommodate three appointments at one time, and an unoccupied dryer doubled as a seat for waiting. The crumpled one-dollar bills in the bread box brought me into the salon frequently. Dad needed some money for gas, or I wanted a buck for the penny candy store, or Mémère needed some cash for a pack of Tarytons. And every time I went in, the beauty shop was in the throes of boisterous bedlam: women, their heads wrapped in tin foil, gossiped loudly to one another over the drone of the plastic domes encircling their ears; the hissing of Tres Semme or, if times were tight, Aqua Net, resulted in a chemical cloud that collided with the plume of cigarette smoke wafting up from plastic ashtrays, leaving me at once light-headed and, depending on the length of exposure, giggly.

And, of course, there was The Chair, upon which more unvarnished secrets were confided than at the confessionals in town at St. Francis. Barbara’s husband—don’t tell anyone—had cancer and was going “all the way up” to Boston for chemo. The town’s Selectman was seen down at the Blue Lantern saddled up to a woman at the bar who was not his wife. Jenny, the teller at the credit union, was pregnant and the father, when he found out, set out on a fishing boat from New Bedford for three months. “What an asshole!” a lady with pink curlers in her hair under the humming plastic dome would yell to her friend in the adjacent dryer. “I love casserole!” the other would yell back.

In the evenings, after all the hair—gray and black, curly and straight, long and short—was swept up, after all of the $10 permanents were tallied, and only when the last lady strutted down the paved walkway to her waiting husband, smiling because she knew he would tell her she looked good, would my farm boy boredom have me creeping into the empty salon. I would sit in the big chair, spinning it round and round and round, the captain of my own starship. Or I would place the sticky plastic dryer dome over my head and transport myself to some other place. And sometimes I would just rummage through my mother’s tray of tools. I would run my fingers along the teeth of a comb, or feel the prickly curlers, or put my small index finger and thumb through her scissor holes, clip at the air, and say to no one at all, “Who’s next?” 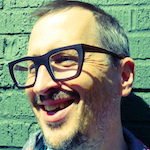 J. D. Ventura is a former print journalist who freelanced for seven years for a LGBTQ magazine in Boston, before heading to NYC for journalism grad school. As a student journalist at Columbia University, he covered 9/11 and went on to become a newspaper reporter in Louisiana, where he was an award-winning feature writer who covered Hurricane Katrina. He is currently working on his second novel. He lives in Alexandria, Va. with his husband and their beloved French bulldog, Talleyrand.

One thought on “Dee’s Salon by Jeff Ventura”