I try my best to ignore the telephone vibrating in my back pocket. I focus on what I am doing–massaging Stephen’s feet. Using lotion, my fingers like feathers, caressing the skin that is now so delicate.

The vibration stops and starts again. Whoever this is, they aren’t going to use voice mail.

I step back, tap the answer icon, already knowing who it is. Barbara, Stephen’s ex-wife.

She is like a vulture, I think. She is circling, waiting for Stephen to die. She might hope to catch him in the act, she is so persistent.

“He’s tired today, Barbara. I don’t think he has the energy to talk to you right now.”

As I respond, I turn my back and retreat from Stephen’s room. It’s the spare room but for now it’s Stephen’s, a small space dwarfed by the hospital bed, every surface covered with medical supplies and hygiene products. All this stuff you didn’t know existed but you find out when you’re caring for a dying person at home, and there it is in the world, waiting for you.

Barbara agrees to talk to me instead of Stephen. She presses me for details.

Yes, it’s Stage Four, I say. No, he won’t be going back into the hospital again. No, no more chemotherapy. Yes, morphine, but not much. He fights the pain, tries to space out the doses, wants to remain conscious as long as he can. Well, you know what he’s like, I say.

I hear Stephen call and I know he is asking me to bring him the telephone.

Returning to his room, I tap the speaker button, put the phone down on the pillow near his ear. I listen to Barbara tell him that he is such a strong person, that he will beat the cancer, that he won’t die.

Stephen’s eyes are closed. I hope he isn’t listening.

“Barbara,” he says, in his new voice that is a mere rasp and barely audible. “I have to go now. Thank you for calling.”

The call ended, I lay my hand on his chest, absorb the quick flutters of his heartbeat, of his shallow breaths, of his generosity. 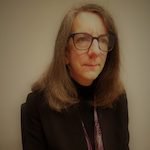 A writer in Toronto, Canada, Margaret Watson’s stories were recently published in paperplates, FreeFall and the Hamilton Arts and Letters (HAL) Magazine, with another forthcoming in The New Quarterly. Prior to winning Streetlight Magazine‘s 2022 Flash Fiction contest, she was longlisted for Prism International‘s 2019 Jacob Zilber Prize and shortlisted in FreeFall‘s 2021 contest. She is currently working on a collection of short stories that focus on the themes of memory and belonging.