When the pandemic first shut down our world in the spring of 2020, my fifteen-year-old daughter and I were at home, every day, all day. I had been a sugarmaker for years, and the month of March and I were old friends. Well, maybe not friends, but certainly long-time acquaintances. I knew the fickleness of March, how this month can stretch into heaps of snow, or afternoons of blinding sun, or days-long, freezing drizzle.

By the end of the pandemic, I sold the property where my family lived and sugared and bought a house in Hardwick village. There’s a line at the end of Elliott Merrick’s Green Mountain Farm when this decent Quaker man remarks how World War II changed his family’s life, as the war did for so many others. In a way, divorce prepared me for the pandemic. When the pandemic clamped down on Vermont, I had already lived through the dislocation and grief of divorce; even more, I had survived.

On those March afternoons that stretched into an interminable April, I often stepped out on the back porch to talk on the phone, out of earshot from my daughter who was working at whatever passed for high school in those first months. I discovered that emails I sent for work were often replied with call me, I’m home, and so many of these calls with strangers morphed from the nuts-and-bolts of my questions to intimate exchanges about how each of us was faring. How had our world broken up so quickly? How were we faring? How were the kids?

On that back porch during those weeks, as snow melted and fell again, I noticed there was scant traffic on the road. Overhead, there was nearly no air traffic, either. All around, there was little human-caused sound, my friends and neighbors and ourselves of course, too, all sequestered in our houses or in our back yards, foraying out occasionally for groceries and weekly post office trips. In the abrupt shutdown, I was laid off from my librarian position. I woke before dawn and wrote all morning, revising a book I had sold. The time, coincidentally, was invaluable to me. Afternoons, my teenage daughter and I took long walks. In the woods, chaff-strewn snowbanks drew in on themselves, melting. Red trilliums and spring beauties and gold trout lilies emerged through last year’s fallen leaves. I was my daughter’s only companion, so the competition for company was nil.

In the absence of my headlong schedule—no more rushing to get my daughter to school, myself to work, to answer endless and apparently not-so-critical email—I leaned into the natural world. My human world had cracked and was failing, but flocks of red-winged blackbirds sang in the ravine behind our house. Although we live in the village, the wild threads all through the edges of the village. A bear ambled by. Foxes set up housekeeping in a den just behind our house. On evenings when we had a campfire outside, we saw soft-pawed kits tugging at each other, playing. The bald eagles returned that summer, gliding over our house and along the reservoir where we walked. On the first May afternoon we took out the kayaks, eagles perched in pines at the end of Mackville Pond.

Our lives continued to reshape. I left one job and took another. We planted a larger garden. My daughter learned to drive. While she plotted her get-away from Hardwick, she learned the trails through the town forest so well, she could thread through the woods on a moonless night.

That fall, I was on the shore of Caspian Lake, crouching beneath a giant pine tree, when I suddenly heard a whoosh. I didn’t recognize the sound as the wings were so near and so large until pristine white tail feathers dipped just before my face. An eagle cut down before me, then rose and flew over the lake. In the early morning, the water was silver. The moving wings bent down in their middles, as the great creature rushed over the water.

Nearly twenty-five years before, I had been running along Silver Lake in Washington state, when I stopped to breathe and saw a bald eagle dive its beak into the water and emerge with a fish twisting in its final moments of life.

That eagle, this eagle. Two stitches in my life. For a moment, I crouched on that shore, my fingertips on the cold, damp pebbles, thinking about that span of years, chockful as much with grief and regret as joy. For those moments, while I watched that mighty creature churn through the rising day over the lake, on its determined way elsewhere, I was filled with simply the miraculousness of that moment, all that happened, in joy or grief, in my own life. For that moment, the eagle tugged me out of myself, and let me soar. 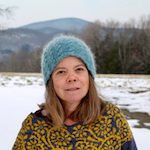 Brett Ann Stanciu is the author of Unstitched: My Journey to Understand Opioid Addiction and How People and Communities Can Heal (Steerforth Press, 2021). A recipient of a 2020 Vermont Arts Council Creation Grant, her essays and fiction have appeared in The Rumpus, Memoir Monday, Taproot, Vermont Literary Review, The Long Story, Parent Co., and Green Mountains Review, among other publications. Her novel Hidden View (Green Writers Press, 2015) portrays the challenges of a hardscrabble family farm. She lives in a small village in the Northeast Kingdom of Vermont with her family and blogs at stonysoilvermont.com.

One thought on “Succor by Brett Ann Stanchiu”