All along the coastline of Japan, hundreds of tall stone tablets stand as warnings about the possibility of natural disasters. Many date back to the 1880s, when two deadly tsunamis battered the coast and killed more than twenty thousand people. Carved with care, the ancient tablets convey messages from one generation to the next, advising those who read them to seek high ground after an earthquake, and to avoid low-lying areas in case of floods.

One of the most well-known is called the Aneyoshi tablet, a four-foot slab of stone placed high up on the rocky northern coast of Japan. An inscription etched by hand into the tablet reads: “High dwellings are the peace and harmony of our descendants. Remember the calamity of the great tsunamis. Do not build any homes below this point.”

There is something about these stones that has moved me ever since I learned about them. They are touchstones, marking human survival against the odds. And they also embody the terrible knowledge of vulnerability that hits me harder with each passing year—the awareness that tragedy can strike at any moment. Most of all, they seem like evidence of our remarkable desire to reach across time—to stretch a hand out toward future generations we will never meet, to share some wisdom or to shelter them from harm.

After sixty-two years on this planet, I am fumbling for my touchstones. Where do I find the messages from my parents and grandparents, or the generations that came before them?

My grandparents on both sides were the children of immigrants, trying hard to obliterate the past. They wanted, above all, to blend in to life in America. Whenever I asked about where we came from, Nana Marion, my father’s mother would throw her hand up into the air in disgust. “What is there to tell?” she asked, looking around her elegant Central Park West apartment with its sparkling chandeliers and brand-new furniture. “My mother raised chickens in the back yard.” As if that explained everything.

I learned more family history from Nana Beverly—my mother’s mother. If Nana Beverly had carved an inscription into a tsunami stone, it would probably read either “Don’t put a hat on the bed” or “Don’t ever expect a man to stay.” A hat on a bed was supposedly bad luck; and the expectations of men came from Nana Beverly’s own childhood. Her father abandoned the family when she was young, leaving her and her sisters to take care of their mother. Nana Beverly fell in love with a handsome young man who, as it turned out, had Lou Gehrig’s disease. When the first symptoms of his illness appeared—clumsiness, muscle cramps, difficulty walking and navigating simple daily activities—they already had a baby, my mother. He died by the time my mother was four. Nana Beverly—the only one of three sisters to get married—moved back home with her daughter, to live with her mother and sisters in a row house in Brooklyn. My mother was that little girl, raised for most of her life in a household of five women.

Nana Beverly never re-married. They all moved to Queens and she managed the household for all of them for the next fifty years, cooking, cleaning, gardening, and keeping a kosher kitchen that somehow fed five people three meals every day. Her home was where the family gathered for Thanksgiving, and cousins, aunts, and uncles often showed up for Sunday dinner.

The scents that simmered in Nana Beverly’s kitchen took up residence deep inside me, like the syllables of Yiddish flying through the air. Yiddish was the language my grandmother and her sisters yelled at each other when they were arguing, or spoke under their breath when they didn’t want the children to understand. I barely learned a word of Yiddish, except for a few very colorful curses. But the cadence and texture of that language are inscribed in so many of my childhood memories. There was a chicken part called the “pippick” that my sister and I fought over when Nana ladled out her chicken soup. To this day, I have no idea what part of the chicken we were eating.

After Nana died, we discovered a kitchen drawer stuffed full of recipes she had written down over the years on random scraps of paper, many of them scribbled on the back of receipts from a yarn shop on Jamaica Avenue in Queens. They aren’t exactly recipes, more like lists of ingredients: Cabbage. Fat. ½ glass water. Nana measured her ingredients with a practiced eye or with one of the jelly jars she used as juice glasses.

I tried more than once to follow one of those recipes, to make her pea soup, which I loved. Nana’s soup was thick and rich and flavored with chicken fat and lots of salt and pepper, loaded with bits of sweet green peas, garlic, onions and carrots. But I could never divine from her cryptic notes exactly how much of anything I was supposed to add, in what order, or how long the soup needed to simmer in order to achieve the precise flavors I remember.

Her recipes were, in the end, mute. They don’t speak to me like the tsunami stones, with messages that can withstand time and translation.

Before my father died he wanted more than anything to find experiences he could to share with my son Jake, his grandson. With cancer ravaging his throat and robbing him of the ability to speak, he talked and joked with Jake in handwritten notes and for a while with a computer program that read aloud the words my dad typed in a mechanical voice that was unnerving for us all. One summer, he took Jake to Disneyworld, where he exhausted himself waiting in long lines in the Florida sun. But he gave his six-year-old grandson the utter thrill of hugging Cinderella and riding the Rock ‘n’ Rollercoaster and Thunder Mountain again and again.

In his final years, Daddy decided he wanted to take Jake to see a Broadway show. He bought us all tickets to see Fiddler on the Roof, and Jake and I traveled on Amtrak to visit Grandpa, for Jake’s first real New York City experience. Jake was so enthralled with the lights of the city at night, he hardly slept. Fiddler was overwhelming for him—he couldn’t really follow the action on stage or understand most of the songs, and by the time the first act finished, he was fast asleep with his head in my lap. My father and I both cried through “Sunrise, Sunset” and the “Sabbath Prayer,” a sentimental ballad about passing on Jewish tradition from one generation to the next. And my heart hurt knowing that none of this—the music, the history, or the romantic version of Jewish life in the Old World—meant anything at all to my son.

My dad stopped using the computer-generated audio to communicate after a while, and relied only on scrawling hand-written notes in notepads he left all around his apartment. His notepads mainly recorded requests, some mundane, sometimes irritated—“Cold. Blanket.” “Phillips head.” “egg salad for lunch”—and occasionally reports on his doctor’s visits and his prognosis. The real questions that must have haunted him—about death or what the end would be like or how to understand what his life added up to—we never talked about.

It has been sixteen years since my father died, and my mother and I don’t often talk on the phone anymore. Both grandmothers are long gone. There are echoes of their lives all around me—I use Nana Beverly’s brass candlesticks on Friday nights to kindle the Sabbath lights; and the china cabinet that stood in her Queens house is now in my study. Photographs and art from my father’s apartment have prominent places in my home.

And yet every once in a while I still pore over those random pieces of paper—Nana’s recipes and my father’s notes—hoping to glean something new, some bit of wisdom that I didn’t recognize the last time I read them. Especially now—when Jake is living on his own, and my two grandchildren are rapidly growing up—I need a message to guide me. A recipe. A list of specific ingredients, with instructions for weighing and measuring: Two cups of flour, a generous teaspoon of salt. An inscription from the past, something my Nana or my mother or father wrote by hand one day long ago, knowing this moment would come and hoping to offer me temporary shelter. 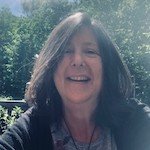 Karen Mittelman is a historian and writer who serves as the executive director of the Vermont Arts Council. Her first novel, Gone Bolshevik (Shires Press, 2016), won an award for literary fiction from the Maryland Writers’ Association, and her poems and essays have appeared in the Comstock Review, Adirondack Review, and other journals.