I’m standing here on Heather Street
Beside empty buildings that used to be the RCMP’s.
A lot now owned by the government, leased
To the film industry. A building where they shoot
Movies of people acting out their dreams.
I’ve seen cops pull up- ‘check locks’,
Move props in and out. 11 at night, “private”
Security guard tells me need to leave. Release
Video footage on demand of me, I was walking
By and a man was waiting there in the lot with his trunk
Open. I heard two shots fire; actors running
From a rented vehicle; cop racing undercover
Past me up the street- all black vehicle.
Holy Shit. Are they shooting a private movie?
Actors running from the lot chased down
By real cops playing fake cops in their spare time
As a form of community service, I started running too.
I imagine most actors are terrified; wearing their faces
On their first side; wearing their child’s face. 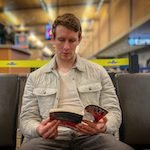 Jasper Glen is a poet from Vancouver, Canada. He holds a BA in Philosophy and a JD. His poems appear in Fauxmoir, Pinky Thinker Press, The Ekphrastic Review, The Antonym, and Island Writer Magazine.