These searched for their family records, but could not find them and so were excluded from the priesthood as unclean.

I can’t tell you exactly what percent of my waking hours is spent looking for things. It could be as little as twelve percent. Probably closer to thirty. It’s worse at certain times of the year. Tax season seems to be a period when I drive myself mad searching for one thing or another: proof of a charitable contribution, a 1099 form, a statement from my Swiss bank saying everything’s cool. In my head, I’m obsessively organized. A place for everything and everything in its place. No exceptions. That’s the person I think I am. That is likely a myth.

In reality, my record keeping system is less reliable than ten-year-old denture cream, less help than a squirt gun in a forest fire. It’s not like I don’t have designated storage areas. If what I’m looking for isn’t in the one place it ought to be, I go on a walkabout, trying to keep my head together, whispering aloud to myself, trying not to curse, knowing the item will show up because it has to be somewhere, doesn’t it? The “it” may be warranty information, proof of vaccination, my passport. Anything that isn’t all that important until suddenly it is.

Well, here’s a little secret. Turns out, after much study—decades of personal investigation and observation―that sometimes the missing item does not have to be somewhere. It might be nowhere. Or, to be more precise, it might be elsewhere. And by elsewhere, I mean nowhere . . . on Earth . . . as we know it.

A couple of years ago, an incident in my own backyard occurred which strongly suggests the existence of another dimension, the portal to which lies somewhere between ten and twenty feet from the north and east property lines. On this day, I was mowing the grass, or whatever is growing back there besides, or in addition to, grass. I lifted the mower up—it’s a push type—to trim some weeds on the side of a hillock, when a swarm of yellow jackets attacked me for disturbing their nest.

At this point I took my gloves off and tossed them somewhere as I high-tailed it to the garage to run inside. Later when things had cooled down and my four stings had been nursed, I ventured back out just far enough to grab the mower and put it into its shelter. Much later, after I’d gone out in the night to spray the nest and cover the openings up with stones (that’ll teach ‘em), I looked around for my gloves. Nowhere. And now, many months later, I have searched high and low, low and high, high and high, low and low, through all the brush and shrubbery, within a radius of twenty feet or so. Nothing. Up in a tree? No. Carried off by delinquent squirrels? No. Swallowed up by the Earth? Probably not.

My wife’s purse? No, but a very good guess. Her purse, the giant one, is one of those supermassive black holes you read about in the news, constantly sucking things into its limitless belly. Light itself can’t escape no matter how much it wishes it could. Every couple of years she decides to empty the contents onto the kitchen table. Out come bats flying, rolls of electrical tape, boxes of mints, a live rabbit, arrowheads, potted plants, chewing gum wrappers, petrified french fries, receipts by the hundred, unopened packages of crackers, old appointment cards, a flashlight, loose change, buffalo nickels, forever stamps, razor blades, several thousand facial tissues, band-aids. But no gloves.

What I believe happened in my backyard is that an ever so slender, ever so brief, and ever so undetectable portal to another dimension opened its loving arms to my $11.99 pair of work gloves. Somehow they found their way through the thin line that separates our dimension or universe from the one next door. Incredibly close, yet totally inaccessible, unless, of course, you’re a work glove thrown at just the right height and angle.

More recently, the metalwork on the latch of our fence gate broke off and fell to the ground, as gravity is wont to carry objects. I made a mental note to find the metal piece when I was less engaged. By the time I remembered to look for it, though, the area was completely covered with leaves and other debris from a rainstorm. A thorough search through all this debris yielded, you guessed it, nothing.

I went to the library to borrow a metal detector, that being on a list of things you can now borrow for one week. A metal detector would certainly find the metal piece and thereby support the traditional belief that it has to be somewhere and things don’t just disappear. All the paperwork at the library desk was completed and the metal detector was confirmed to be “in the back.” And then, all of a sudden, “oh wait. There’s a hold on it. Someone has it reserved. Sorry, I can’t let you have it.”

So now the library is in on it, the cover-up I mean. The cover-up that confirms that I’m on to something. We’ll call it “portalgate.” You might expect the CIA and the FBI to be involved, and possibly Scotland Yard, Interpol, and the Houston Astros, but the library? Yes, the public library. It’s not surprising really. What do you expect from a place that gets rid of half the books in its collection, and then offers in their place “things” to borrow like projectors and sewing machines and metal detectors. A place that on a whim decides to re-shelve all the short story collections into the main fiction stacks according to author. Where a newspaper or magazine in the periodical section a month ago is suddenly “discontinued.” And where the very specific book you want to read is out on “the bookmobile.” That’s what kind of place they are. Well fine! Agents Mulder and Scully didn’t give up at the first sign of resistance.

And I don’t plan to give up, either, until I get to the bottom of it, whether or not I receive the Nobel Prize for physics. And whether or not my story inspires a movie starring a hyper-excited Nicolas Cage that becomes a surprise blockbuster hit streamed simultaneously on Netflix.

Over the centuries mythical gremlins, mischievous gnomes, have often been blamed for taking things and hiding things, unless there are servants available to accept the blame, those all-purpose scapegoats of the rich and famous. Sometimes the gremlins return things that a moment ago were missing, but now are inexplicably there right in front of your eyes. “If it’d been a snake it would have bit you,” you’ve probably heard once or twice from some smart mouth nearby.

Gremlin shenanigans, I believe, might just be our naïve, fanciful explanation for the phenomenon of invisible, as yet undiscovered, interdimensional portals. What if in this other dimension/ alternate universe, a lost item is sometimes jettisoned back through the opening to its rightful home? What if all those times you thought you were going crazy you were merely the victim of portal volleyball? What if beyond this unseen portal there is a large room, a very large room, a huge room, filled with socks, scotch tape dispensers, your “good” scissors, the putter you got back in ’98, that family recipe you haven’t seen in ten years, a missing jigsaw puzzle piece, old class rings, ten million pairs of reading glasses, and one pair of medium, well-worn, gray work gloves? We may never know . . . but the truth is out there. 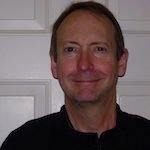