Ocean wind pushes the four of us
with such force that we lean onto each other
perched side-by-side on a pile of rocks –
daughter, mother, daughter and the father
standing behind. The mother’s face covered
with curls, all of us laughing at the wind,
camera barely balanced and ticking time
for the shutter to open and close.

Straight strip of sand stretching north
was barren for miles, but for sandpipers, seagulls
and the plovers who paused and ran, paused
and ran again. Today, another generation
of plovers, their sons and daughters
still pause and run, and the sea that rises
and crashes still rises and crashes,
and the moon still waxes and wanes.

We could not have held on tighter. 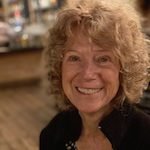 Martha E. Snell’s poetry appears in Ninth Letter, Moon City Review, Cutthroat, The Poet’s Billow, and Streetlight Magazine. She received the Mary Jean Irion Prize from Chautauqua Literary Arts Friends in 2015 and was a finalist for the 2015 Bermuda Triangle Prize and the 2019 Patricia Dobler Poetry Award. A Professor Emeritus at University of Virginia’s School of Education, she earned an MFA from Vermont College of Fine Arts in 2015. She lives in Charlottesville, Va.

One thought on “A Photograph From That Summer on Point Reyes by Martha E. Snell”