It’s not hard to sneak into the Manhattan Exclusion zone if you know what you’re doing. The Coast Guard mostly looks for the guys who don’t know what they’re doing—the ones who rush past Spuyten Duyvil with some loud-as-shit electric motor alerting everyone still living in Riverdale of their presence. It’s good when these guys get caught. They love racing down the flooded streets of Manhattan, usually drunk, disrupting the wild, but still fragile ecosystem bubbling up from below the waves.

If you know what you’re doing, you know to launch your boat from one of the clap-trap docks underneath the Pallisades and fucking gun the engine until you’re right past what’s left of Yonkers, then you kill it and let your momentum and the currents of the Hudson pull you south. The guards swarm right around Inwood, so you gotta hug the Jersey coast until you reach Harlem, then you turn the tiller and restart your engine, keeping it slow and quiet as you cross the river. If you do it right, you’ll get deposited in Midtown and you can use the rusted-out, drowned body of The Intrepid to hide your entrance into the watery streets.

Sander steers us down 8th avenue, past the water-logged wreck of the Port Authority Bus Terminal. I stare down 42nd street towards Time Square, the dark billboards displaying memories of musicals that once played in now-flooded theaters, water sloshing above the velvet seats, pulsing back and forth over empty stages. I like going to the touristy spots of the city, but Sander hates it. This place isn’t what it once was. It is a new thing. And we must appreciate it for what it is now, he always says. He’s not wrong. But I like going to the once-famous places and imagining what it was like when there were streets instead of water, when there were millions of people instead of the quiet crashing of the waves.

We are looking for the Last Man in the City, which I had always thought was an urban legend. Sander too, until he heard otherwise from some dude he’s sleeping with. He saw him peering out a window on 23rd. He swears it. We make a left on 23rd. The light of the sun setting behind my back pierces the upper layers of the water, then bounces back up and reflects against the cracked windows that still remain in the buildings that line the avenue. I feel like I’m traveling through a tunnel of gold and orange light.

Sander pulls up to an oyster bed between 6th and 7th, then plunges his hand into the water and pulls up a fresh one. He tears the two halves of its shell apart and slurps up the meaty innards. They’ve seeded the oysters here along with seaweed forests to help purify the water and restore the ecosystem. I never touch the oysters—they’re filled with chemicals and lord knows what else—but whenever I admonish Sander he tells me stories of when his Grandmother lived in Istanbul and how she’d buy mussels freshly caught from the Bosphorus. She lived to be ninety he says.

We linger at the oyster bed for a bit, while we examine the creatures that have made their home among the oysters and the seaweed, rock fish and urchins, jellyfish and anemones. There are eels writhing at the bottom of the water that look to me like a living blanket over the sunken asphalt streets. Just a year ago there were barely any of them. Now they have become plentiful.

There were once fifty-four ecosystems in Manhattan, before the Europeans came and mucked everything up. Now there are either twelve or sixteen depending on who you talk to. There is life thriving in the Exclusion Zone and more of it every day. Maybe the drowning of the cities wasn’t so bad. Or maybe it was bad for some, but good for others. Or maybe the world is too complicated to sort into good and bad and these categories are useless in the first place. But these are the questions Sander loves to ponder. I myself am content with simply floating through the ruins.

We come to the location of the supposed Last Man but all we find is the silence of the waves. A few seagulls flock overhead and in the distance I see a blue heron perched on a second story window, staring at the water, waiting for a fish to swim into its reach. Above us are the teetering brownstones of flooded Chelsea. Most of the dust-coated windows that aren’t broken are closed, shut decades ago, but one remains open, revealing the dark interior of a moldering apartment.

I tap Sander and point. He cries out HELLO, HELLO but all he seems to accomplish is perturbing the crane. His words echo between the buildings then fade into the sloshing water and distant bird cries. We wait for the Last Man in Manhattan to stick his head out and reveal himself but he does not. I see only the tattered remains of blue curtains blowing in the wind. I tell Sander it’s hopeless, my voice a whisper so that I do not disturb the sounds of the flooded city. 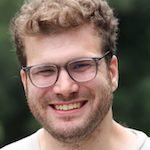 Daniel Goulden is a writer, teacher, and climate organizer living in Brooklyn. They split their time thinking up imaginary worlds and imagining a better one. They have an MFA in fiction from the New School and their work has been published in the Rathala Review, Asymptote, and Europe Now. You can find them on twitter, @danielisgoulden.