“I didn’t initially like abstract art,” admits artist Kathleen Markowitz, her vibrant paintings offering bursts of primary colors, suffused surfaces that suggest rather than depict nature and its mysterious forces.

She remembers her early exposure to art and how, over time, her taste would evolve. “My aunt was a fine arts painter in New York City. As a young girl we spent much time at the Metropolitan Museum of Art. Velazquez was our favorite artist. One day we stumbled on a contemporary artists exhibit. I saw my first Pollock. It emotionally took me somewhere fresh and light. I also had that feeling after seeing my first Cy Twombly and Agnes Martin.

“I am now drawn to the language of color,” says Richmond, Va. resident Markowitz. “I like how an unexpected mark can spark a powerhouse of emotion. When I feel emotional honesty in a work of art, I am energized.”

Markowitz began her creative career as a sculptor working in marble and clay under the instruction of John Torres. She later moved to pastels and oils studying with Virginia oil painter William Fletcher Jones, who has been described as “an innovative colorist.”

She further studied with the New York School of Visual Arts in Barcelona, and The Academia Di Belle Arti Pietro Vannucci in Perugia, Italy. “When I was in Barcelona, I would go to the early morning market and be inspired to paint huge fruits and vegetables. They had a lot of energy,” says Markowitz. “I also painted dogs with the brightest colors I could conjure.

“My love of saturated and startling color came after studying in Barcelona,” she says. “The city pulses color. Mosaic tiles, the influence of architect Antoni Gaudi, the morning market with fruits and vegetables, raw with stems and roots.”

While keeping her vivid and dynamic palette, Markowitz ventured still into new and nuanced terrain. “It was only after visiting the unadorned simplicity of a Virginia Trappist monastery some fifteen years ago that I felt I no longer needed color to fill every canvas.

“I made tiny marks and they became a language of their own. I could show an inch of a willow tree and get the feeling of the whole tree. It could tell all I needed to know,” she says.

“I realized I didn’t need the structure to have the emotional experience. It liberated me to discover other things without the weight of a familiar object. It happened organically.

“After Covid and everything we’d been through, a small line was not enough and I did color again. The language of color became necessary.”

In defining her current work, Markowitz points to British abstractionist Howard Hodgkin who said “I paint things I see and experience. I am a representation painter of emotion.”

With a Thousand Other Heartbeats, a recent show at the Quirk Gallery in Charlottesville, demonstrates Markowitz’s mastery of both minimalist and densely colored canvasses. She credits Abstract Expressionist Joan Mitchell and colorist painter Cy Twobly among her influences.

She notes that Homecoming began with a single stroke on which she built the painting.

On a pilgrimage, one takes as little as possible, she says. “So in Pilgrim, I tried to minimalize the marks and color to show the emotion. I wanted to retain activity to the essential.”

“Deep Down uses lots of color that wouldn’t stop,” Markowitz says. “There was more to say and feel and it took a long time until I felt all had been said.” 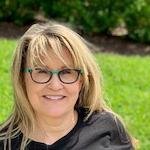 Kathleen Markowitz is a writer and a visual artist. Her work has been exhibited in international venues including the United Stated embassies in Hong Kong and South Africa and the Tashkent 5th International Biennale of Contemporary Art in Uzbekistan. Her work is included in the collections of Federal Reserve Bank and Capital One Corporate Collection. She is represented by Page Bond Gallery and Quirk Gallery. To see more of Markowitz’s work go to www.kathleenmarkowitz.com and @katmarkowitz.