A year after the black birch tree
in the backyard died, the tree man
asked me what I wanted to do.
He had come to estimate the cost
of tree work, pruning some oaks,
cutting away dead branches, etc.
We had already decided to try
to save the ash tree in front
rather than cut it down as its
companion had already been.
I thought about it for a little while
and then said, “No, don’t take it down.
Let it stand there as it is.”
“But it will fall anyway, branch
by branch, twig by twig.
You’ll be cleaning up out here often.”
“That’s all right,” I said.
“Let it stand. The birds will use it.”
“And the insects,” the tree man added.
And the birds have used it, as have
the insects. I too in my way, picking up
branch and twig, branch and twig. 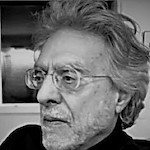 Nominated for the National Book Award and twice-nominated for the Pulitzer Prize, J. R. Solonche is the author of twenty-eight books of poetry and coauthor of another. The Porch Poems (Deerbrook Editions) was a Shelf Unbound Notable Indie Book in 2020. He lives in the Hudson Valley.