Across the narrow alley way between row houses, where trash cans totter and feral cats loiter, a window opens onto the neighbors’ kitchen. For once, the blinds are open after dark, and I can see the family at dinner. Though they moved in this past winter, we haven’t spoken yet; but I feel like I know them from their Sunday morning ritual. If I sit at my front window at 8:45 a.m. sharp—which I often do as I drink coffee and read the newspaper in my chair—I see them file onto the sidewalk, from tallest to shortest, like a family of ducks.

The well-built father leads. He opens three doors to the sedan, first ushering his elegant, to me anyway, wife under his wing, as she glides onto the front seat with dress tucked under and bag clutched to lap. Then he tucks his two ducklings into the back seat. These elementary-aged looking girls wear dainty maryjanes with laced ankle socks folded over and full skirts falling from under wool dress coats. How I envy those girls the precious care they receive.

The mother wears the same plain black pumps every week, as she probably has been doing for who knows how long, since I have noted how out of style they are yet how well-shined they are. No doubt she wears those heels just once a week for the hour or so she spends at church. A place my mother never went, even though she had so many pairs of shoes. But they took her places I couldn’t go.

I sink deeper into my old stuffed chair as the sedan pulls out. When the car is out of sight down the street, a draft from the window catches me. I warm myself with a splash of whiskey in the coffee mug.

Now though they are gathered around a smallish table under a large white glass ball of a lamp which illuminates four place settings and numerous platters. They have changed out of their church clothes and for the first time I see them in their home. The mother covers up an oxford shirt and jeans with an apron, the girls wear pink pullover sweaters, and the father wears a Pittsburgh Pirates t-shirt. I tug at the neckline of my sweatsuit, and run my hands over it, as if brushing away the stains.

Now, the father thrusts an index finger into his glass and the mother jumps up and returns with a pitcher of water. The two girls are sitting on one side of the table next to each other, and for the first time I see their big-toothed smiles. They serve themselves forkfuls of spaghetti, pulling the strings haphazardly onto their plates. In a flash, they turn to each other with a scowl. I find my lip twitching. Please don’t be angry. You aren’t like my family.You are nice to each other.

Don’t let me down. They have no idea I count on them.

They had grasped for the spoon to scoop up some grated cheese at the same time. One concedes to the other, pushing the bowl, with two outstretched arms, toward her sister. I lean back onto my chair and the uneven leg rocks.

This is the first time I’ve seen the girls smile; yet those smiles are private between them. The girls’ eyes dart from the father at one end of the table to the mother at the other end. Are they fearful or are they silently asking their parents to join them? The parents’ faces relay no expression. They twirl their spaghetti and swallow fork fills as if doomed to paddle this pond interminably.

The girls elbow each other playfully. The father takes them under his gaze. What is going on? The words he spoke have caused their mouths to close in an instant, and the two girls now sit stiffly studying spaghetti strands on their plates. The mother’s mouth has turned downward, and she shakes her head. I lift my glass and warmth trickles down my throat. It’ll be okay.

The father jabs his fork into a meatball. He fills his mouth and guzzles some of the table red he has just poured from a bulbous, rope-wrapped chianti bottle. The girls twirl spaghetti, too, now with their left hand by their plate, fist tightening and loosening a wad of the fabric tablecloth. Only the mother sits motionless, glaring at her husband. He hunches over his plate, foraging for the next mouthful, his jaw masticating each morsel. I shake my head to rid memories from my mind. This family was supposed to be different.

Then the father glances up and I catch a glimpse of his lips twisting like a snarling dog. Whatever he said, his words hit the mother like a slap in the face. She flinches. The girls stop their forks midway to their mouths, mimicking their mother’s expression. The woman braces for what is to come. Her neck muscles pulse with tension. The girls press their backs into their chairs and their hands clench around the forks by the side of their plates.

I dim the lights and adjust the blinds, leaving only a sliver of a gap between slats at the windowsill. Fear compels me. Even though I can’t hear a thing, I know what is to come, too. My throat is dry, and I take a swig to relieve it. I thought I knew this family.

In a flash, the father is at the other end of the table pulling the chair of his wife away from the table, with urgency that shows in the tug of his t-shirt across his back. She tilts her chin up, and her eyes, wide-opened and dark, at once ask a question and rebel against the inevitable. When, with the firm grasp of one hand, he pulls her from her seat, and with the firm palm of the other, he smacks her behind, she offers no physical resistance. She collapses. She doesn’t shrink. She crumbles.

I want to stand up, to run somewhere to someone, but I have to continue my watch, which has suddenly become an important duty, not just an idle flirtation.

Her eyes are on her daughters, their eyes are on her. He yanks her arm again and delivers another smack to her backside. Tears fall in jagged canals over her cheeks, into her mouth, down her neck, glistening the way a spiderweb does in the sunshine.

The man takes a step back and swipes his hands against each other, as if removing dust from them. His mouth becomes a large square, so I know more words are coming out. By now, the wife has lifted herself back onto the chair. Defiance paints itself clearly in the set of her mouth, but her eyes are on her daughters, her arms lamely reaching out to them. Then, only then, did I notice their crinkling eyes and faltering shoulders. They both rub at their reddened cheeks with quivering fingertips. I wipe at my eyes, too, with the back of my hand and dry it on my sweatpants. I stand up, my hands over my mouth, stocking feet rigid on the old vinyl floor.

From behind them, standing in the kitchen floor, the father gestures in the girls’ direction. What did he say? He leaves the room slowly, his face lost of its usual, as far as I have seen, propriety and crossed with, what I call, shame. The girls look to their mother. The mother nods to the girls; and they simultaneously leave the table—looking back as they do so and receiving from their mother another nod. Now what!

The mother remains, alone and still, upright on the chair, still in the spot where he moved it. She takes a sip of water. I pace back and forth, memories flashing in my mind’s eye, like snippets from a bad movie. I press my hands to the sides of my head, trying to stop the reel from rolling. At last, with some deep breathes I slump back in my chair.

The man skulks into the kitchen, now dressed in his Sunday suit. He points his index finger at her, emphasizing whatever he is saying with a bobbing of the head. She glowers from beneath a veil of black hair that’s come unpinned. The sisters slink into the room side by side in their good church clothes, yet their hair is uncommonly disheveled. The father motions his hand in their direction and the three go out from the kitchen, leaving alone the woman. She offers her daughters a limp grin when they look to her before departing.

I feel like I can hear the front door closing the woman in. I flinch when the door slams.

I stumble to my chair at the front window to catch a view of the street. The three bear the same somberness that before tonight had made them seem regal. With sober faces they shuffle, heads down, giving away no secrets. But the duck line is no more. The girls cling to each other, even as the father opens a car door, and they climb in the back seat one after the other. He takes them away. But to where?

Back in the kitchen, the woman stands at the window, scowling at cats screeching in the alleyway. She tugs at the blinds, but before they close completely, I see on her face a frown open itself in pain and I see a dreadful scream free itself from her lips. Then she is gone. And I am left alone. I close my own blinds. Nothing in my house has changed, everything is still in its place, but I am breathing different air. 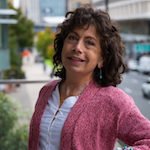 Regina Guarino writes in Wilmington, Del. Her work can be found at The Skinny Poetry Journal and Yellow Arrow Vignette. She posts @r58tree and @RG25476667.