Growing up in Waynesboro, Virginia, a small town which photographer Stacey Evans describes as a mix of rural, urban, industrial and suburban landscapes, she remembers watching trains speed by and wondering, “’Where are they going?’ I wanted to go there too. Even now whenever I hear the train, there’s the mystery and romance of going somewhere.”

In her late 20s, Evans started riding trains South and North to visit family and friends, and en route, noticed with increasing interest, the variation in the land. “I was really mesmerized by the changing landscape — the land physically changes from North to South, the woods and farmland to the depressed density of the cities,” she says. “I wanted to see if I could capture in photographs the similar and different ways people live. The train window became my access point. Before this series, I created montages, blending shots of people and land that had been bulldozed and showed the evolution of the land as well.”

More recently traveling by train across the country, Evans has taken thousands of photographs that comprise her ongoing project, I Ride Trains. In 2010, she received a Puffin Foundation grant for her project. Keep Out is one of two shots now exhibited in Mainland, a landscape photography show selected by Pulitzer Prize Photo Editor Stella Kramer for the Kiernan Gallery in Lexington, Va. Evans’ work has been shown throughout Virginia, and in 2011, was a finalist in the Earth Through A Lens exhibit at the Rancho Mirage Public Library, Palm Springs, CA. An art and commercial photographer, Evans is an instructor at Piedmont Virginia Community College, the Virginia Museum of Fine Arts, and artist-in-residence in the Albemarle County schools.

“As the blur of the American landscape raced by — construction sites and mini malls, power plants and empty backyards, dirt roads slowly tracing a path to the horizon — I took aim, focused, and tried to capture a moment.”

Evans also finds stories — unsolved mysteries — in shooting such fleeting images. Homeless snaps a man alone in the Virginia woods; White Crosses catches rough, decaying buildings alongside newer storage bins, a distant church and four crosses in a remote Montana town. “I begin to wonder about these communities. I imagine a story; they make me wonder what happens there.

“I’m really interested in time and the progression of time and how we develop and use space and how humans develop and interact with the landscape. When not moving, you have more time to make a decision and adjust the image. You can take multiple exposures of one scene. I only have one chance, sometimes down to a fraction of a second to make the shot. I eliminate a lot of control — the time of day, the lighting, if the window is dirty or even what side of the train I’m on. That takes some pressure off of me, the anxiety of missing the shot. I have to be open and understand, there will be another shot.”

“Sometimes there are small patterns I can anticipate – power lines, for instance, going through Montana where I could see them off in the distance running beside the road. The route determines the view, whether crossing the dry desert, the West’s Big Sky states or hugging the Pacific coast. Lighting is dictated by the schedule and season as well. I was excited to see I’d be going through Pittsburgh at eleven o’clock at night.

“It’s hard to take images at night when there’s really no light and you’re on a moving train. I shoot with a pretty standard lens — 24 to 70 mm lens — with an aperture of 2.8. At an hour when there’s no light, I push my camera as far as I can… upping the ISO. I shoot everything in manual; I also slow down the shutter speed as far as I can. To me, the image is more important than if it’s grainy or ‘noisy’ or looks a little pixely. You sometimes get painterly results and a certain softness.

“As the train crosses time and space, America reveals itself like a secret. What had once been moving, what is now disappeared, freezes for just a click — smoke stacks, swimming pools, the silhouettes of silos and the night-burning city lights.”

While the window naturally frames each photo, Evans’ instant choices reveal her respect for changing landscapes, both fresh and familiar, fixing scenes in seconds before they vanish.

Now furthering her journey, Evans asks, “What is photography? What do we do with all these photographs?” To find answers, she’s deconstructing many of her fast moving images, looking at their textures close up and blending them in bits and pieces with prints and paint into new incarnations as montages and collages. Some of these new works are now displayed at PVCC. A selection of photographs from I Ride Trains also are on view in the New Members Show at the McGuffey Art Center. 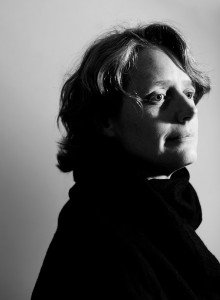 More of Stacey Evans’ work can be seen at staceyevansphotography.com

One thought on “On the Move: Art by Stacey Evans”