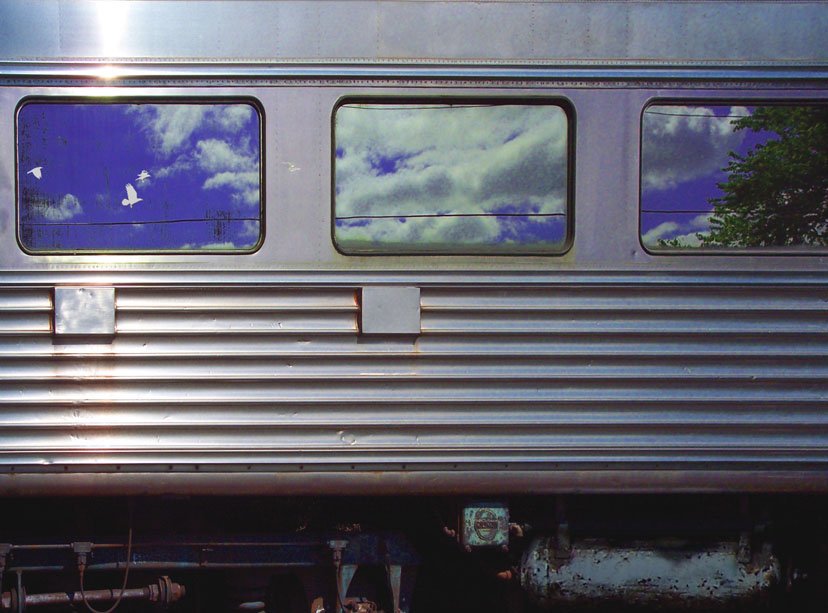 Recently scanning for a train schedule, I was surprised to discover an advertisement for “The much-anticipated Amtrak Writer’s Residency.” Amtrak as literary inspiration? Well their menu does include “Fresh Sandwich du Jour,” “Salmon with Chablis Sauce” and “Chicken Apple-Maple Sausage.”

And, it seems that 24 writers can taste such treats while riding the literary rails and writing about it. Amtrak will pick up the tab for a long distance, round-trip ticket and provide the lucky writer with a private sleeper car complete with its own desk, bed and window to document America’s passing scene. Winning residents need not be professional or experienced writers, only persons able to demonstrate “a passion for writing and an aspiration to travel with Amtrak for inspiration.”

A brilliant gimmick, marketing ploy or chance of a lifetime for the beginning or seasoned writer? I imagine the possibilities: writers-in-residence criss-crossing the country in a Trailways bus, zipping-the-world on Virgin Air, trolling the Caribbean on Carnival cruises, or morphing Mark Twain on a Mississippi paddle boat.

I remembered as a late teenager, sailing to Europe with my parents aboard the MS Johan van Oldenbarnevelt. My father — with my mother’s insistent prodding — was given free passage as writer-in-residence on the student liner in exchange for a few onboard classes in the art of writing fiction and fact. In fact, few eager students showed up, the lure of an all-day, open bar and 25 cent beers too tempting to resist. Revelers partied from their morning aspirins and Coke to moon rise over the mid-Atlantic. Chairs, like disposable balloons and kazoos, were hurled into the surf to cheers, tubas and drums. My father retreated to his cabin with a good book. Alas, several years later the dutch-built MS Johan van Oldenbarnevelt caught fire and sank into the sea.

Not to be deterred, my mother urged my father to try his teaching talents in another writer-in-residency. This time, she’d found us cheap seats on a vintage Southern Railway Pullman train out of Charlottesville that somehow miraculously arrived days later in San Miguel de Allende, Mexico.

En route from our train windows, we watched the landscape change from cities and towns to rocky, desolate stretches with maybe a coyote in sight. We swapped trains in St. Louis, wending South through Texas with a brief stop in the 104 degree San Antonio heat. We were glad to finally land in the quiet village of San Miguel with its charming Instituto and the Escula de Bellas Artes. My father did, in fact, teach a few writing classes and enjoyed the spicy hot tamales, tortillas and starry nights. (I fell in love in the Mexican moonlight..Bloggers beware). Once home again, my father persuaded my mother in the future to book more conventional travel plans, and when given the choice, to understand that he actually preferred writing in his very own residence.

For readers and writers now attracted to Amtrak adventures, selection for the Residency program runs from March 17, 2014 to March 31, 2015. Further application information can be found here.

And for writers and universal book lovers, the 20th anniversary of the Virginia Festival of the Book will be held in Charlottesville, this year from March 19-23rd. King and Maxwell series author David Baldacci will introduce luncheon speaker Rita Mae Brown, author of the Sneaky Pie mystery series. Other highlighted speakers include Lee Smith, her latest novel, Guests on Earth; children’s writers Kwame Alexander and Sonia Manzano, also Sesame Street‘s “Maria,” and E. Ethelbert Miller, poet and literacy advocate.

For further information on the 2014 Festival: www.vabook.org