“If we can’t educate you, we’ll make a pet of you, or sacrifice you.”  This from Jean Sampson in her class Gutsy Abstract Oil Painting at The McGuffy Art Center where Jean is a resident studio artist. This is a joke at the expense of the lone man in the classroom and because I often find myself the lone man, I hadda laugh.

Ladies, you do know we LIKE these kind of jokes, right?

“The painting just sits there, asking, demanding, what are you gonna do to me?” 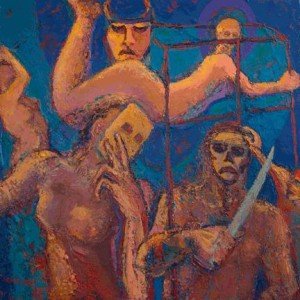 Jean and I look at a canvas on an easel, piled thick with layers and scrapings and long strokes of multi-colored paint.  The piece is called The Betrayal. The images leave me torn. Initially. On the wall and up to the ceiling hang drawings of two naked men at horseplay (the first man enormous, letting it all hang out–his minion diminutive.

Jean speaks deliberately about the creative process. “It’s a learning to let go, a vulnerability, an allowing to be led.”

I ask “cathartic?,” “purging?,” words that are often thrown around.

“No,” it’s an incisiveness, a becoming unglued,” she says. With Jean there’s no denying we go there. There is no wrong.

“You can’t say anything about me without mentioning Morton P. Traylor.”  Jean credits Traylor, the founder of the Virginia Art Institute and her “art Dad,” for teaching her to lasso her right-brain creativity and stop the left brain from making things messy and plain WRONG–the same perspective Jean tries to instill in her students. “We walk around believing we have certain limitations; we get so blind.” 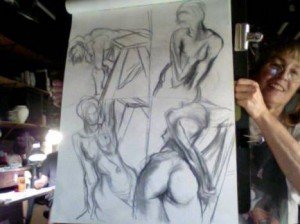 Jean first appeared in Streetlight Magazine in the fall 2005  print edition. For the “old” Streetlight Mag hard copy was something very nice to have around the house. In that early edition, Jean’s painting Totem graces the cover and her poetry is featured along with an interview by Jessica Myers Schecter. Jean’s poetry was also featured in Streetlight’s debut digital Spring 2012 issue. Her poem, I Revise neatly sums up Jean’s philosophy: “I revise because I am like a snake who outgrows her skin. Struggling, I leave behind old words, visions.”