On Wednesday, September 17th Jane Smiley presented a lecture and reading from her new novel, Some Luck, at Sweet Briar College in Amherst, Virginia. The novel is the first in a planned trilogy, The Last Hundred Years, about an Iowa farm family. Coincidentally, that same day the National Book Awards announced her one of the nominees for the fiction long list. 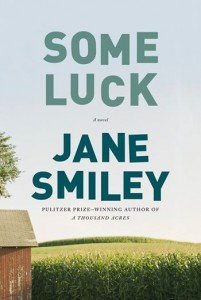 Sweet Briar’s Memorial Chapel was filled with students, professors and a sprinkling of the general public. Behind the lectern, J.S., attractive and slender, in her sixties, with shoulder length blonde hair, was personable and engaging.

She began talking about her beginnings as a writer and selected passages from her non-fiction book, Thirteen Ways of Looking at a Novel to illustrate her points. She emphasized the importance of being a reader. She was first a reader and early on set herself the goal to read all in the literary canon, including some non-Western, for example, The Tale of Genji.

One of her aims, she told us, was to discover which themes great authors wrote about. She concluded that all great literature had one common theme: death. I thought this actually rather intriguing and wonderful—that she figured it out. Or more precisely, when young she would be so driven to read most all the classics on her own and have the bigger perspective, be that focused and looking for insight, the common thread, the connecting theme. At one point during her lecture she challenged the audience. She asked who had read all three volumes of Proust. No raised hands. I was hoping that she’d lower the bar just a smidgen and ask had any one read just one volume. She may have had better luck.

She discussed the development of characters in fiction and observed that a character’s inner life can be more compelling than what’s going on in their outer life. And when it came to plot she informed us that she learned plot from Arthur Conan Doyle’s Sherlock Holmes and that she read “Hound of the Baskervilles” many many times and confessed that everything she ever learned about plot she learned from that story.

After her lecture, she read passages from earlier works, some of which had scenes with horses. She told the audience she had used the Myers-Briggs personality types to inspire her development of characterizations for the horses. Apropos. (Sweet Briar offers an equestrian unit). She concluded her readings by reading a chapter from Some Luck, a passage about a young Iowa farm boy who plays a prank on a rival school mate.

After the readings she invited questions from the audience. The most interesting questions were the ones that focused on her writing process. Where does the inspiration to write come from? For J.S. it comes from curiosity about something. And research. She told her audience, if you lose interest in your story or writing, or have writer’s block, research will wake you up again. To write, a writer must be self-forgiving, must keep at it, and, she tells us, not let self-doubt stop you. 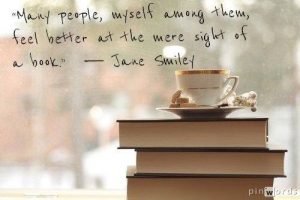