June 10-13th all eyes will be on LOOK3, Charlottesville’s stellar photography festival now in its seventh year. The town will host numerous famous photographers as well as revealing talks, exhibits and shows in a variety of venues. This year’s Festival is curated by Kathy Ryan, Director of Photography at The New York Times Magazine and Scott Thode, the current Visuals Editor for E.O. Wilson’s Life On Earth. The LOOK3 Festival of the Photograph’s stated mission: “to celebrate the vision of extraordinary photographers, ignite conversations about critical issues, and foster the next generation of artists.”

The Paramount Theater will open its doors Wednesday with The Smaller Majority: An Evening with Piotr Naskrecki, a presentation by this acclaimed nature photographer of small scale creatures he captured on film in Mozambique. Photos of his larger-than-life invertebrates are bannered in the trees along the downtown mall throughout the month of June.

A photographer and entomologist with Harvard University’s Museum of Comparative Zoology, Naskrecki is a founding member of the International League of Conservation Photographers (ILCP). His work has appeared in The Smithsonian, Natural History, National Wildlife, National Geographic, and BBC Wildlife Magazine.

Thursday evening’s Featured Artist Talk will showcase photographer Larry Fink interviewed by novelist and essayist Donald Antrim. Fink, a photographer noted for his “keen observation of small scale interactions” over a 55 year career has been featured on the pages of Vanity Fair, The New York Times and The New Yorker. He has taught for 41 years, over a decade at Bard College. His solo shows include ones at MOMa, the Whitney Museum of American Art and the San Francisco Museum of Modern Art. In his first monograph, Social Graces, Fink looked closely at the “uppercrust of New York City and the down-home folk of Martins Creek, PA.”

Friday morning, photographers Vincent J. Musi and Alec Soth will be double billed at the Paramount. Musi known for his animal portraits in The National Geographic has also been   praised for his photo essays – from hurricanes and volcanoes to mummies, sports and     archaelogy. Over the past 30 years, Musi’s works have also graced the pages of Time, Life, Newsweek, Smithsonian and American Photo.

Alec Soth’s photos reveal “uncanny insight into the peripheries of contemporary American culture.” His work has been exhibited widely including the Jeu de Paume in Paris and the Fotomuseum, Winterhur Switzerland. In 2010, The Walker Art Center in Soth’s native Minneapolis, staged his survey show, From Here To There. His acclaimed first monograph, Sleeping by the Mississippi, was published in 2004. He has also published NIAGARA (2006), Fashion Magazine (2007); Dog Days, Bogotá (2007); The Last Days of W (2008); and Broken Manual (2010).

Friday afternoon speeds up for the fast pace of sports photography. Photographer Walter Looss will talk with Steve Fine, former Director of Photography for Sports Illustrated, Looss’ photographs remembered for over 300 S.I. covers, his coverage of Olympic athletes up to and during the 1984 games, and his portraits of such athletes as Michael Jordan and Lebron James. His publications include Hoops: Four Decades of the Pro Game, Classic Baseball: The Photographs of Walter Iooss, Jr., Walter Iooss: A Lifetime Shooting Sports & Beauty.

Saturday morning will feature David Alan Harvey’s compelling photos from the Berlin Wall to Rio de Janeiro as well as Native Americans hip-hop culture. Harvey’s work has been exhibited at MOMa, the Biblioteque Nationale, Paris, the Corcoran Gallery of Art, and the Virginia Museum of Fine Arts. His books Cuba (1999) and Divided Soul ( 2003) “capture the effects of the blood and sweat of a cultural migration to the Americas.” His photo essays have appeared in the National Geographic since 1973. Harvey, a member of Magnum Photos cooperative, lives in the Outer Banks of North Carolina. 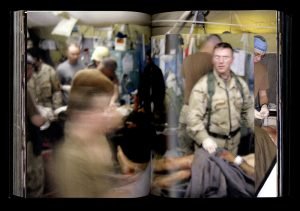 Monica Haller also will present The Veteran’s Book Project—an “unflinching” collection collaboratively published with dozens of men and women veterans of the wars in Iraq and Afghanistan.

Saturday afternoon LOOK3 will present Zanele Muholi’s Love, Life, and Loss, an exhibit focused on bringing awareness to the LGBT community in South Africa. “These photographs of weddings, funerals and individuals are an attempt to capture our visual history, while claiming our full citizenship,” says Muholi. Her powerful photographs document stories of hate crimes against the gay community in Africa, exposing the harsh realities of “corrective rape,” assault, and HIV/     AIDS. Her works can be viewed on the downtown mall across from the Freedom of Speech Monument and chalkboard.

Muholi will discuss her work with photography producer and editor Chris Boot. Among Muholi’s many honors, she was awarded the 2013 Carnegie International Fine Prize for emerging artists.

Original and innovative photography — photojournalism to fine art – from famous and emerging photographers from around the world will be spotlighted Friday and Saturday evenings at the Ntelos Pavilion on the downtown mall.

Click here for more information on the LOOK3 Festival.