Until I was six I was loud and my eyes lit up and family was everyone everywhere. Then my cousin Jeffrey died, and it took a year for the brain tumor to kill him. We were the same age, he was me, and I watched him die. It took a year for him to lose his hair, his sight, his hearing, his face, his hand/eye coordination. He taught me to tie my shoes and then he suddenly couldn’t put his on. He was bright and loved and athletic, then mean and bitter and devastated.

“Why me?” he screamed. He threw his toys. We thought those were bad days, but they were good. He still had energy and motor skills. It still occurred to him to fight.

It’s strange to me that from an ugly, painful year I can only piece together a ragged quilt of memories. This leads me to believe my parents kept us apart as much as they could to save me from too much psychological trauma, or maybe my brain has repressed, forgotten or healed. What I do have is the game room at Boston Children’s Hospital, and the way it felt like a real sacrifice to give him my Beanie Babies and The Little Rascals VHS. What I do have is a trip to K-Mart where Jeffrey and I were allowed to choose whatever toy we wanted so I picked a stuffed cat that purred when you shook it and he picked a baseball glove that he would never use. What I do have is his puffy face, his garbled voice, and his body wrapped up in blankets on the couch, his eyes flickering shut halfway through every movie. He always wanted the lights off.

One day I sat on the carpet in front of him and watched Angels in the Outfield until the credits streamed to black. We were frozen in the glow and static buzz when my mom said it was time to leave.

“Tell Jeffrey you love him,” she said.

The next day I was standing in the window waiting for my neighbors to pick me up to see a production of Annie. My mom told me that Jeffrey was dead and I didn’t cry and I was thinking he’s been dead a long time and I didn’t say I loved him. I was seven and learned people can pass away while their bodies are still breathing, that death is more than an empty body. Jeffrey’s death was expected; the tidy ending to a horror movie. We knew the script: dark rooms, chemo pain, and the funeral of a child.

They played “The Circle of Life” at his funeral. They wouldn’t let me watch when they put him in the ground so they had me plant a tree for him at the elementary school instead.

After that I stopped talking. I refused to join in at birthday parties. I always stood at the end of the line at recess and found things to obsess over. I learned to sob at silly things like not getting a vanilla cupcake, losing my What! Ever? wallet on my birthday, falling off my bike in the sand.

When I watched him die, I learned how to die and I’m not sure I ever learned how to live again. I never felt the same, so whether it was growing up or going to first grade or losing him, I’ll never know. What I do know is after that I never felt like I fit in anywhere. After that, I became a ghost. This is such a strange, sad, lonely life to float around in. I don’t cry in the window when the worst has happened, but in odd, spattered moments where I’m reminded not only that we can’t get what we desperately, desperately want, but there are cancers that eat at us for absolutely no reason. No God or stars that I know of will save someone just because you beg.

When I visited his grave last year for the first time since I was little, I knew exactly where it was. I walked through the pitch black night with only the light of my headlights and I didn’t look at a single wrong tombstone. Losing Jeffrey is in the map of my bones. These days when I walk by his bedroom, the one on the first floor he moved into when he got so sick he couldn’t walk up the stairs anymore, I still stop to look for him. The tender nostalgia, the stutter heartbeat, the sorrow. Those are the things that sleep there now. 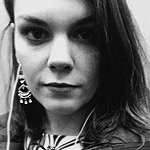 Jennifer Cox grew up in New Hampshire and now lives in Boston. She works at Harvard University where she is pursuing her master’s degree in literature & creative writing at the Extension School. Her fiction appears in Microchondria III by the Harvard Book Store and freeze frame fiction.
Follow us!