My last year of elementary school, at the end of the 50s, was also the end of my family’s life in Washington D.C., where we’d lived for four whole years. My father was in the Air Force, and we moved a lot while I was growing up. This time he was transferred to a small town in Tennessee, called Tullahoma, where he was to serve as commanding general of the nearby Air Force base.

The first day at my new school, the girl in the desk behind me—a redhead with freckles as thick as her accent—leaned forward and hissed in my ear “Abraham Lincoln was a mad man, and GO HOME YANKEE!” Since most of our classmates shared her distrust for anything north of the Mason-Dixon line, I spent a lot of time on my own, the year we lived there.

The Air Force assigned my father what they called a “striker.” He was an airman basic, and part of his job was to serve as chauffeur or gardener or to do whatever jobs our family needed. He was an African American man—or colored, as people said back then. His name was Heinz, and he was soft-spoken and kind. He mowed the lawn. He drove me to piano lessons and drove my older sister, Helen, to a Catholic high school that was forty minutes away. Helen was fifteen, and the next big event in her life would be getting her learner’s permit. She couldn’t wait.

Heinz always drove us in our family car, which disappointed me because his car was a source of fascination. It was a shiny black Chevrolet coup, its inside filled with trinkets—beads that hung from the visors, jewelry on the ceiling, figurines glued to the dashboard. I peered through the windows when I walked by. My favorite figurine was a hula dancer on a spring. I wondered if she danced when the car moved, and if Heinz would get distracted, watching her.

One day I came home from school to find my mother pulling books from our shelves and loading them into boxes. “What are you doing?” I asked.

“Donating them,” she said. “I just found out that the library for the colored high school has no books.”

“No books?” I was astonished. And even more astonished later, when my mother told me that Heinz had never learned to read, and he was worried because if the Air Force found out, he could never get a promotion. He didn’t want anyone to know. My parents hired a retired teacher to secretly tutor him.

One evening in early spring, my sister was late getting home from school. When she finally burst through the door she was crying, but managed to tell us what happened. She had been driving with her learner’s permit—which required her to have a licensed driver in the front seat—and that was Heinz. Halfway home, a scruffy old car pulled up behind them, flashing its headlights. Then it pulled beside them, nearly running our car off the road until Helen stopped.

Three men got out, and two of them pulled Heinz from our car and started roughing him up. When the third one snarled “What are you doin’ with a nigger in the front seat?” Helen thought fast. “That man is an airman,” she yelled. “He works for my father, who’s commanding general of the Air Force base.”

When the men heard that, they stopped and threw Heinz into the back seat. He was badly shaken, but nothing was broken.

We were all shaken, but we carried on. When the weather turned nice, I liked to walk to town. There was a Piggly Wiggly market, a library, a movie theater, several churches, a couple of blocks with stores. Everything was segregated. The black community was literally across the railroad tracks.

I had walked to town one sunny day, and Heinz was going to pick me up. Clusters of farmers stood around on the sidewalk, dressed in overalls, talking, chewing tobacco, watching. I didn’t pay much attention to them. I was enthralled by the display of scurrying, peeping chicks—their down dyed bright Easter colors—in the window of the five and ten cents store.

When Heinz pulled up, he was in his own car. I hurried over, elated. Now I could see all those decorations up close. Heinz was getting out to help me, but I didn’t wait. I opened the passenger door, hopped in… and then looked up. Several farmers were staring at me, intensely. One of them spat. I got out, fast, and slipped into the back seat. Heinz came around and closed the door, looking down, not saying a word.

We rode home silently. The beads and trinkets all around us shimmied and shook. And the hula doll danced. Inside her island’s shimmering shores, with a big smile plastered across her face and not a care in the world, she danced and danced. 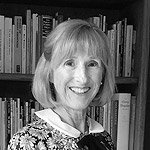 Annette Boushey Holland is managing to recover from her childhood as an Air Force brat and even to take root, over several decades, in a small town in Northern California. She is a former staff writer for The Nature Conservancy and has published articles on environmental issues as well as essays, poetry and a translation. She is currently working on screenplays and a nonfiction book.
Follow us!