In the painting Ram’s Head with Hollyhock
there is a melding of bones and sky
and desert, no beginning or end,
just the eye sockets of a skull
transfixed on the faraway
and in the foreground, red hills and cedar.
I imagine O’Keefe walking in the desert
at night, catching a glint
at her feet—a shell, a stone—
and stooping to gather it up,
discovering the bleached bones
of a skull, vast and empty and beautiful,
like her desert. She must have rotated it
in her hands that night under the moon
as if it were a small earth, seeing in
its bony crevasses and arched jawline
the curvature of her own world,
its hills and arroyos alive in this skeleton
of animal. She must have heard the
echo of mountains, the rhythm of sky
in the labyrinth of bone.
And when she painted the yellow hollyhock
beside the skull, she must have seen
its petals ignite in flame,
a heart laid open
at its center, forever pressed
into bloom, into memory
of what we lose in the world,
then find again in hill and bone and sky.

You spoke a language
we could not understand
just before you died, your last words

a gust of misplaced syllables
and I imagined you traveling
in another land, somewhere

between the continents of living
and dying, an equinox
where dark presses

against light, moon
against sun, where sky
and earth and even the trees

speak a foreign tongue. Sometimes
in the middle of the night,
awakened by a dream,

I stalk the house
in search of something
familiar and alive I can touch,

listen to. I play the piano,
stroke its keys, a new constellation,
water the amaryllis planted

is a still life, a fixture
in a world we are traveling
away from. 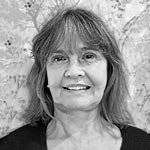 Jo Kennedy is a poet and painter living in Richmond, VA. She has an MFA in Poetry from VCU and a Masters of Humanities from the University of Richmond. Jo has published in a number of journals including Florida Review, California Quarterly, New Virginia Review, Oregon East, Hawaii Pacific Review, George State University Review, and Kansas quarterly, among others. Her chapbook Wind River Song was selected as the winner of the 1997 Anabiosis Press chapbook competition and published in that year.

Featured image: Muse Me by woodleywonderworks at flickr. CC license.