(Unless otherwise noted, all paintings are watercolor/mixed media on hand-felted wool and rice paper.)

I am kind of an image junkie, especially images of the subconscious or dream state. I became interested in art as a teenager and the Surrealists were who I found first.

I began my actual art career working in fibers. In undergraduate school at Virginia Commonwealth University, I was a weaver and felt-maker and worked with many materials and textures. I taught all of these processes as well as papermaking and became enamored with paper, the simple beauty and incredible versatility of this everyday material. While I loved texture, and the structure of textiles, I also loved images. Even when I was weaving, I was collaging painted images onto the canvas surface.

Eventually, I combined my love of paper—specifically mulberry and rice paper—with the felt to create a “canvas” that allowed me to paint in detail, but retain an unusual surface. I began working with watercolor—a medium I’d previously never understood or been attracted to—and realized that the rice paper took the watercolor beautifully. I could work in a series of glazes that left the watercolor looking more like oil paint than traditional watercolor.

Towards the end of graduate school, I was in a horrific car accident that permanently altered my body, During a long, slow recovery, I became very interested in the body, looking at x-rays, and anatomy and biology books. Forms such as organs, umbilici, and bones became really beautiful to me. I began to look at the biology systems of plants, animals and humans and explore how these three connect or intersect.

While some pieces have a narrative quality, I don’t really plan the images to tell a story. A specific image may begin the process and the rest simply builds from there.

For many years, I have been a meditation practitioner, gravitating towards sound meditation. We go through life with sound entering and exiting our space without our consent. This movement creates a sort of symphony that needs no composer. I believe we encounter the world visually in the same fluid way except as mostly unconscious or un-awake.

Most of my work attempts to layer images as we hear sound. We see the world in constant flashes of form and color, and I question why these seemingly disparate images can’t be connected, just as we connect sound. I attempt to harness the moving picture into an image that combines the abstract with images of our daily experience.

In 2012, I moved to San Miguel Allende, Mexico. San Miguel has inspired new images and diverse opportunities. Mexico is a very surrealistic country especially San Miguel. Sensuous colors and forms often present themselves in strange, appealing juxtapositions. A kind of magic is built into the culture that accepts the unusual, and references my early interest in surrealism.

My painting influences over the years include R. B Kitaj for his spatial sense, and Francis Bacon for sheer power in his imagery. I also love Lenore Carrington and Remedios Varos, both ex-pat artists who spent the majority of their lives in Mexico.

A recent series I am working on involves birds or bird heads used as totems. Masks of all kinds have also always interested me, and of course, there is a rich tradition of mask-making in Mexico.

The idea of taking a live thing and giving it traditional or ritual characteristics appeals to me. Birds have an iconic, almost primordial place in all cultures, and I hope to filter this idea through my particular interest in hidden biological systems.

This spring I will be in the south of Spain for several weeks where I was awarded an art residency by the Valaparaiso Foundation. The work I will complete there is scheduled in late October for a solo exhibition during Day of the Dead in San Miguel Allende. 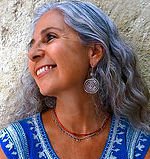 Linda Laino’s work has been shown from the Hill Gallery, Richmond, Va. to Small Works N.A.W.A. Gallery, New York to the Vincent Gallery in San Miguel. Laino’s art can be seen on her website. Some of her essays and poetry can be found on Elephant Journal, The New Engagement, Sheila-Na-Gig Journal and Life In 10 Minutes. Click here to read Laino’s blog.