Mopsy, our beloved cat of mixed origins and numerous partners, had just had another litter of kittens—this time only four. She had amazed us the previous two times with six, all beautiful and now in good homes. We gave our new little ones the easily identifiable names of Brownie, Whitey, Stripey, and Junior—Junior looking very much like his mother, grey-mixed. They were beautiful kittens and we loved all of them; however, no one loved them as much as my brother BB. He gave them additional names other than the obvious ones—Mudface, Snowflake, Superman, and Hercules. No one seemed to be upset with BB’s second set of names because they were always interesting. So, most of the time, the kittens were devoutly referred to by both of their given names, Brownie Mudface, Whitey Snowflake, Stripey Superman, and Hercules Junior. Besides, we loved the names of BB’s stuffed animals, especially his teddy bear, Wilbur. Wilbur had only one eye so he needed all the pampering that we could muster and all of us slept with him on occasion.

On a particularly hot July afternoon, Johnny, BB, Curt, Paul, and I were upstairs playing with the new litter in the bedroom that Mopsy had chosen for delivery. Our mother, MamaLu, had recently gotten another dose of religion and was listening to some sermons on tape before she went to prayer meeting later in the evening. She was studying the book of James in the Bible. She had the door to her bedroom closed but we could hear a preacher talking and occasionally yelling hellfire and damnation. His delivery of the Good Book did not sound like what we were used to in the Presbyterian Church.

Our newest living toys scampered all over us and also climbed up the curtains until they reached a certain height, at which point they would either fall with a thud or begin to cry for a human rescue. The curtains were sheer, or more accurately flimsy, so that as the kittens climbed them, they pulled out the threads. After one play session, the curtains looked like they had “runs” in them.

Everyone had a favorite kitten; mine was Brownie Mudface because I felt sorry for her. Everyone said that she was ugly, so I deemed it necessary to give her more attention to assure her that she was just as beautiful as her brother and sisters. Paul chose Stripey Superman as his favorite because he had Superman pajamas. Whitey Snowflake was BB’s favorite because he liked to play in the occasional winter snow. Curt chose Hercules Junior because she looked like Mopsy; however, like every teddy bear or hand puppet he possessed, he also gave Hercules Junior the name of Elmer, this iteration being Elmer the Fifth; hence, the complete name was Hercules Junior Elmer the Fifth. Johnny was content just loving the diligent, watchful, and caring mother, Mopsy. It was amazing and comical to friends and neighbors that we would call the kittens by their full names, especially Hercules Junior Elmer the Fifth. Only Mopsy had a single name.

The kittens played with everything in sight—spools of thread, shoes, toys, small cars, anything that they could bat around with their paws. Eventually they became tired and were ready to nurse. Mopsy would call them with a deeper meow than usual, and they would respond. Today, however, Hercules Junior Elmer the Fifth and Whitey Snowflake did not report to their mother. They had run under one of the beds and climbed up into the box springs, creating a feline limbo or purgatory for themselves. Their whining could be heard but they would not appear when called—in spite of all the coaxing that could be mustered by five small boys and a mother cat. Paul was very concerned and being the smallest of the five of us, he crawled under the bed and edged himself toward the site of entry. He saw Whitey Snowflake and put his small hand on her. She responded out of fear by scratching him intensely; he began to cry, leaving immediately from the scene of the attempted rescue. He said that he might have just pulled her tail because it was so dark that he couldn’t really see very well. He had heard, but not seen Hercules Junior Elmer the Fifth. BB was quick to find a flashlight, but it was missing batteries. Ironically, as we would learn later, they were in a new toy fire truck somewhere outside.

Curt pulled the curtains open as far as he could, trying to provide some light. He yanked so hard that they fell off the wall. Still not enough light. Johnny moved a lamp as close as he could to the bed, knocking off the shade, but it did not help. Meanwhile, Whitey Snowflake and Hercules Junior Elmer the Fifth continued to whine pitifully. Mopsy was becoming increasingly upset and calling more vigorously to the two stranded ones, while feeding the other two. At this point, everyone was becoming distraught.

BB had a remedy. A candle would provide enough light to find the lost ones. He ran downstairs amidst the sound of the preacher still at it and placed a chair in front of the mantel. He stood on it and was just high enough to grab the two pink candles that were on both sides of a mirror. He looked for matches but found none. He turned on the stove and placed a piece of paper on a burner. It took a few minutes and he had a flame. He had seen MamaLu use the method on numerous occasions when she could not find a match.

He lighted one candle and proceeded up the stairs slowly and cautiously; he did not want to extinguish the flame. Upon entering the scene of the whining, he lighted the other candle and gave it to me, telling me to hold it in case the first one fizzled out. We all watched as he slowly slid under the bed with his source of illumination, calling the two kittens by their full names. Suddenly there was smoke and then a small flame. BB emerged quickly, coughing, and without Whitey Snowflake nor Hercules Junior Elmer the Fifth.

“Get some water,” he yelled to everyone. Understanding the nature of an emerging crisis, all of us went running down the stairs to get some glasses. We filled them with water, went running back upstairs, spilling at least half of it, and threw it on the now burning bed.

“Get some more,” yelled Johnny, who was also trying to round up the cats. The room was quickly filling with smoke. What a sight! Smoke and fire upstairs and hellfire and damnation downstairs. Joy and Binkie, friends from next door, were playing outside and saw the smoke. They came over immediately and joined the fire brigade. We did not seem to be doing much to douse the flames. Finally, with some sense that the termination of this fire surpassed the know-how and expertise of seven children, Curt and I went downstairs to inform MamaLu. She opened the door and immediately recognized the existence of a crisis. She quickly darted up the steps in the midst of the expanding smoke.

“I can’t see—get me a rock or something to knock open the window so we can get the smoke out of here and know where the fire is.” MamaLu’s knowledge of feeding a fire with more oxygen failed her in this particular emergency. Johnny returned with a big rock, one of many that surrounded a small bed of irises near the front door. MamaLu crashed it through the window and the fire immediately blazed even larger.

“Call the fire department,” she yelled to Johnny. But before he could do so, he was met by two decked-out firemen with a hose in tow. They firmly demanded that everyone leave the house. Water was gushing down the stairs as we left. Mrs. Pitts, our neighbor, had seen the fire and smoke and had made the important call. She took us across the street to her house and gave us cookies and Kool-aide. Paul was crying because he did not know who was taking care of Mopsy and her family, especially his favorite kitten, Stripey Superman.

The firemen had the mattress and box springs fire under control within ten minutes. They threw the blackened mattress out of the window. The whole affair caused quite a stir and we saw neighbors we had not seen in quite a while, somewhat like a fire-induced neighborhood reunion. MamaLu felt terrible that she had not realized that a fire was occurring upstairs while she was being inspired downstairs. She was happy that we were okay and had been so brave as to attempt to douse the fire, even though we knew better than to light matches, candles, or anything else flammable. She skipped prayer meeting that night and we ate all types of food that neighbors had brought us in our afternoon of distress—lots of macaroni and cheese. It seemed that macaroni could ease the stress of just about anything, including a fire. There were also plates of fried chicken and other types of items generally categorized as funeral food.

The kittens were okay, we assumed. In the midst of the chaos Mopsy had moved them to parts unknown. Later in the evening she made a grand entrance, announcing loudly that she was back and that she was hungry. She gave no indication of where she had hidden her loved ones.

After dinner, one of the rescuing firemen came to visit us. All five of us looked like guilty conspirators as were crammed onto the small couch where he addressed us. He showed us photographs of children who had been burned in fires. All of us cried. He didn’t chastise us, but he did give us a stern warning about playing with fire, particularly emphasizing candles, the stove, matches, and firecrackers. He made us pledge to stay away from these potential dangers and he gave us a poster with Smokey the Bear on it, telling us that we should look at it every day as a reminder of his lecture to us about safety.

The next week Uncle Harold came to visit us and he repaired the knocked-out window. MamaLu replaced the missing batteries in the flashlight and decided that the fire had provided an opportunity to repaint the entire room. She thought that the combination of pre-fire “midnight blue” and the lingering smoke effects needed to be “lightened up.” The Army Navy Surplus Store had “baby blue” paint on sale, so she bought several gallons; enough for the walls as well as the new bunk beds that she purchased. The very kind bus driver on our route knew of our recent distress and even loaded the furniture and paint at the back of the bus and detoured to our front door where he helped to unload everything. MamaLu loved to paint and when she finished the project, everything looked more beautiful than ever; and, the smell of the paint masked the lingering odor of the smoke.

Little-by-little we regained Mopsy’s trust and one week after the fire she returned Brownie Mudface, Whitey Snowflake, Stripey Superman, and Hercules Junior Elmer the Fifth to us, placing them on a lower bunk bed with a new dark blue bedspread. They had grown and looked beautiful. Now our family was reunited and we took a long afternoon nap. 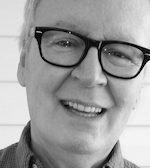 Chris Carbaugh writes the adventures of five boys, his four brothers and himself, and their incomparable mother, MamaLu. As a new writer, he is honored that his work has appeared, or is forthcoming, in The Heartland Review, Broad River Review, Gravel, Kestrel, The Dead Mule School of Southern Literature, THEMA, The Tampa Review, Hippocampus, and several other journals.