As her life changed so did the patterns of her art.

“I love patterns…I surround myself with patterns,” says mixed media artist Judy McLeod, a Charlottesville resident for more than four decades. “When I’m making art, I love the surface quality of textures and patterns—the opposite of minimalist and clean blocks of color—a kind of visual riot. That pleases me.

“We also live patterned existences—we go to the same house every night; we have the same children every day; the same partner or set of friends; workspace. There’s a regularity to our lives. Sometimes it’s very routine and geometric and every day at two o’clock you do the same thing. Other times, emotionally and psychologically and spatially, it gets warped all around.”

The patterns of Judy McLeod’s art recently resulted in a 40-year retrospective shared at three Charlottesville galleries. A native of San Diego, California, Judy grew up respecting the rewards of orderly equations with a strong interest in math and science. “Before I took a left turn and became an art major (Phi Beta Kappa at U.C. Berkeley), I was completely into mathematics…and the scientific basis that meant becoming a printmaker. Printmaking is about math, chemistry and physics in addition to an artistic vision. If it wasn’t for that (grounding), I don’t think I’d be an artist.

“I wasn’t a bit interested in having this big white empty canvas. I wanted to calculate ahead of time and design and break it down. Printmaking is based on measurements and precision. That really suited me coming from a scientific background.” Her father, and both her older and younger brothers, are physicists. She also has a Masters of Science in art education from The Massachusetts College of Art.

Evidence of McLeod’s fascination with arithmetic patterns surfaced as a graduate student at Virginia Commonwealth University from 1979 to 1981. She wrote her thesis on Islamic Patterning and the Relationship to the Divine and produced striking prints displaying the patterns’ intricate geometry.

After receiving her MFA, McLeod began teaching art foundations, drawing, and painting and printmaking at VCU. She produced patterned prints as well as popular large silk hangings. As successful as these works were, they eventually felt remote and unemotional. “It didn’t touch on anything personal or confront anyone in any way. I thought, I’m going to draw. I’m going to put women into the pattern. My grad school buddies wondered ‘what are you thinking about?’ It was a challenge to myself to see if I could make them visually, meaningfully co-exist in the same picture frame.

In tune with her changing sense of self and the feminist times, McLeod embedded female images into numerous patterned surfaces. “At first the woman clearly was me. The subject was me and mine and my children, my life, my love…what’s it like to become a woman with all these patterns of existence,” she says.

“I think you can be back and forth between being trapped or comfortable in the pattern of your life. At that time, I was just biding my time,” says the mother of three. “In my Women in Water series, the women are just floating, not unhappy but at the same time there’s a rip tide. That made sense to me. The woman is floating in water and water is a life force; we are water. It’s a water planet. It’s everything.

“In Victim of Circumstance, the woman looks pleased, but she may well be trapped in her existence.”

If the half hidden Julie reflects McLeod in a period of submersion and suspension, the tide turned for her in the mid 80s as she emerged from such patchwork to experience success, recognition and subsequent reverberations. “All of a sudden,” she noted, “I was stepping out in the art world. I was also rushing home for my family…rushing back down to Richmond to teach at VCU…it was too much. Those were tumultuous years.”

Soon Come, and other paintings of the period, visually represent the claims on McLeod’s time and psyche. “The wings are hands and show the students, the children, anybody who wanted something from me. Enemies and friends; they’re good and bad, all the needing. The woman balances a basket of hammers on her head; the hammers are tools of protection. There’s also a mysterious tail with a hook. The devil’s tail could be pulling her over toward the dark side,” says McLeod. “I’d been to Jamaica. ‘Soon come’ is what you say there when you mean ‘Just a minute. I’ll be right back.’”

Instead of returning to her known existence, McLeod interrupted her prescribed patterns when she and her husband soon divorced. Taking a Leap pictures the artist “jumping over the top of the hands; she’s taking flight out into the world as an independent being…It was a break from being the respectable professor, mother and wife. I was very aware of my move from being a good wife to being a woman. An artist, and an independent one.” Taking a Leap won McLeod the 1986 Irene Leache Memorial Biennial Art Show first prize at the Chrysler Museum.

Once out on a limb, McLeod sought new emotional connections and approached her figurative subjects from fresh angles. ”I had relationships and it was fun but a rocky road,” she admits. In 1988, Walk and Don’t Look Back again won her the Chrysler Museum’s top prize.

The figures, observes McLeod, were not all shaped from a straight ahead perspective. They were depicted from the side, below, above, to new graphic viewpoints. “The figures are expressive, she says, “but that’s not the shape of a person, not the anticipated, regular one.

“The buckets and the ladders are about relationships too…There’s the power line and the odd angles; ladders you use to get up and get out.

“At first any woman in the work was me, but then I started a series, The Mothers and The Sisters. It occurred to me, that there’s this nurturing thing…but also there’s also a kinship and affinity and a relationship of womankind all over the world. So my vision went from woman to women.”

Green Apple, a highly detailed mixed media collage, celebrates women as part of The Mothers and Sisters. The series represents all the women of the world and the essential roles they’ve played—from ghostlike ancestral figures to white-scarved mothers protesting “The Disappeared” sons of Argentina.

For more than 20 years, McLeod continued to expand her personal and vast vision of women around the world while teaching at VCU and in the Charlottesville city schools where she created programs for the gifted in visual arts. She also taught art education courses and programs at the University of Virginia’s Curry School. She went on to explore patterns, literal and imagined, in Vessels, in portraits of Wanted Women, and In Her Shoes, pairs of imaginatively decorated footwear.

From 2010-2015, McLeod sailed around the world as part of the faculty for Semester at Sea. Espacios Dorados (Golden Spaces) reflect her ever widening, untethered view as well as the patterned, gilded collage images of light in architectural spaces that are Spanish, Turkish, Indian, Moroccan, she says. The resulting mixed-media collages are of exotic, mysterious, and magical interior spaces. These places all have a golden glow. Some seem new approaches that reference earlier Islamic patterns.

“There’s always a high degree of texture and pattern in everything I do now. It’s carried over. It’s not formalized so much in geometric patterns, but my world is a busy world with marks and sparkles,” adds McLeod.

Places and Spaces depict a more peaceful existence. Patterned seascapes and collages look into a deeper distance. ”I think this has to do with age too, the idea of my vision is looking towards the horizon now which I think is very exciting,” she says.

“The seas and the oceans of planet earth connect, one to the other to the other. That said, while sailing around the globe, the different seas and oceans are distinct and endearing.

McLeod’s progression includes collages of vintage maps and globes that offer ever more outlying visions—perspectives that eventually reach into the universe and beyond. Her sometimes golden spheres remain highly decorative, with nods to starry nights, and compelling patterns, old and new. 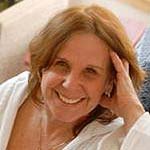 See more of Judy McLeod’s work on her website https://www.judymcleod.net.

Her next show, Post Retrospective, will be held at the Woodberry Forest School Gallery from April 12 to May 4.