I’ve lived way out in the country for a little over a year and, with the exception of an inability to have food delivered, I have no complaints. There is something weird about the house though: the rocks.

The previous owner used them to mark the driveway to separate it from the yard. But he didn’t stop there. He went on to create a path outlining the entire acre. He also used them to encircle the trees in the yard. Every. Single. Tree.

We live in the George Washington National Forest.

This is something that everyone remarks on at some point during their visit. “So, you didn’t do that, right?” and “How long did the previous owner live here? How long would it have taken to do that?” and “Do you need help moving those stones somewhere else?”

Next come the theories about why the rocks are there. The leading theory is that he dabbled in some sort of amphetamine (read: meth) and had nothing else to do in the forest. Maybe he started with the sensible, useful Outer Walkway (so dubbed because there is an Inner Walkway that leads through the middle of the yard) and just couldn’t stop himself. He got addicted to moving the rocks around and the next logical step was making little rings around the trees. Or he just had to do something with the extra twelve hours a day he gained when he lost the need for sleep.

Maybe he was Irish and trying to emulate the fairy circles of his youth, those magical rings made by dancing fairies. Perhaps, being so far from his ancestoral home, he wanted to bring some of its lore and mystery to the beauty of a Virginia forest.

Or maybe there was even more rock-scaping when he first moved here and he had been working on removing rocks up until the day he left. I honestly couldn’t even imagine what the yard would look like with more rocks in it, but I suppose it’s possible. So perhaps the current overwhelming rock circles are actually an improvement and I should be grateful that’s all we have.

One theory that I have about the rocks that gives me pause is about the subjectivity of art. What if these rocks are an artist’s magnum opus, a culmination of a life’s work with a medium of rocks and a canvas of land? I’d honestly like to be more generous in my opinion, but even if this was an artist’s masterpiece I don’t think I would appreciate it in any way other than the required physical labor.

I do have plans to someday start removing the circles around the trees. The property will certainly blend in better with the surround woods, with less of man’s mark. Even better, I won’t start thinking of the previous owner’s motives for the current landscape every time I walk outside. Until then I’ll just have to be satisfied sifting through all sorts of theories, each one weirder than the next. 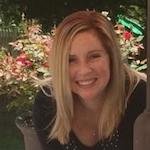 Emily Littlewood lives with her dog, Animal, and husband Jason in Raphine, Va. After getting a degree to teach English, Speech and Theater, she began working in banks. She is currently copy editing for Streetlight and working back toward her passions.