Images come in my imagination, either imposed by impressions from the movies, music or theater or by simple communication with another person. Some think my works are based on literature, but this is not so.

The image of a potential picture will not leave my imagination until it is depicted on canvas or paper, an oil or acrylic painting. First, I inwardly develop all the details. Sometimes I start a small sketch, but the more detailed image is developed in my mind, the less time and effort I need for its implementation.

The portrait painting plays a very significant role in my work. The models may not be always people whom I know well. I may see a face or bright display of features which I would like to use in a portrait. Or it can be someone famous who inspires me. I create a new character. Sometimes people depicted in my works have collective features or even ones I invented.

As an artist, I am always looking for something new—a new type, image, view.

I do not know what particularly attracts me to the image of African women; maybe it’s their identity, authenticity and independence—qualities I seek in all my portraits.

I believe that an artist’s work reflects her inner emotions and moods. No doubt, any artist’s work is totally autobiographical—an inspiration of certain landscapes, journeys or memories. People depicted in my paintings often have features similar to the painter.

I have done many self-portraits and sometimes characters of my portraits acquire my features. My portrait in the role of Jeanne D’Arc rose in my mind spontaneously, in the subconscious. I see clear parallels between how artists, particularly women artists, have fought for their art and how Jeanne D’Arc defended her religious views.

At each new stage of my development, I was inspired by different artistic trends and personalities—the Impressionists, Pre-Raphaelites and Art Nouveau as well as the inspiration of modern artists in the age of developing technologies.

In respect to technical peculiarities of portrait painting, initially I did not think literally of the color palette of Jazzman, but made it based on my impressions of jazz music. The trumpeter plays on a stylized background of New Orleans. I’d like to give the image more authenticity by placing my character on the streets of New Orleans and the world of American jazz.

The model’s features prompt the painting manner—a dynamic pastiche. So with brush strokes, I transfer motion in my works to portray city traffic, or the limited motion of a model. If the composition is forceful itself, the strokes will also be dynamic and clear.

I followed the same brush stroke principles when creating these views of London. I was inspired by the rhythm and motion of the city streets and wanted to transfer this infinity motion in strokes of oil paint. I also wanted to capture the opposite spirit of London: the old, classic architecture in proximity with new technologies.

At the end, artwork is a vision, a mirage transferred from reality to the canvas. To make the work real and interesting, an artist must break through the canvas’ two dimensional surface to create a sky or horizon.

In defining art’s modernity, I do not divide works into mainstream, underground and classics. It is important for me that art should have a response in the viewer’s soul. If at least one person who sees my work experiences some emotion, then my goal is achieved!

Kateryna Bortsova was born in Kharkov, Ukraine, where she now lives and works. She received her Master of 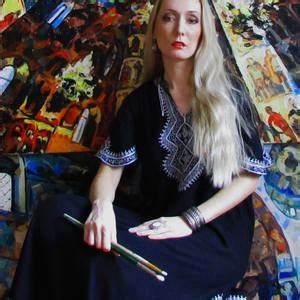 Fine Art from Kharkov National Pedagogical University in 2008 and her Bachelor of Graphic Arts from Kharkov State Academy of Design and Arts in 2007.

Her work has been exhibited from Taiwan and Moscow to Portugal, Spain, France, the U.K. and U.S.A. Both Graphic Art by Kateryna Bortsova and People of Contemporaneity were exhibited at Kharkov State Art museum. In 2016 Bortsova won the Find Your Brilliance contest of Dell and Mashable, USA. She also won the 2016 Emirates Skywards Art of Travel competition, Dubai, United Arab Emirates and the cover competition of Oxford University Press, Great Britain in 2012. Her work has recently been published in Barzakh, New York and The Esthetic Apostle, Chicago.Click here to see more of Bortsova’s work.