The magic of carnival rides, animals and the whistle of a circus calliope are evoked like silver dollar memories by multimedia artist Benjamin Frey. “I wanted to do a series of works showing movement and energy. Carnivals are an area of intense energy and a lot of movement.

“For us, the carnival is a place of mystery, wonder and a little bit of darkness. In the contemporary world, the carnival is the last place where super human, herculean acts and extraordinary things are still performed. The acts are not fables but real.

“I don’t consciously aim for nostalgia but it is there on a subjective level to me in my subjects which evoke nostalgia. We live in a jaded culture. But here we can imagine returning to an almost childish sense of wonder and that is a good thing.

For Swing Low above, Frey combined elements of the Navy pier Swing Ride in Chicago and the top of a Paris carousel to convey new speed and perspective.

Spreewald was found in an abandoned amusement park in East Berlin. The fiberglass elephant is, as it was, half submerged in the soft ground.

A native of Waterville, Maine, Frey now lives in Buena Vista, Virginia. “I grew up with a paintbrush in hand,” he says. “At ten, I wanted to create cartoons like Asterix and Calvin and Hobbes. Being an artist was what I always wanted to do.”

Frey apprenticed by observing his family role models. His grandfather painted landscapes; his mother makes etchings and sculpture, and his father, a watercolorist and acrylic painter and “an exceptional draughtsman,” has frequently illustrated for an organic seed catalogue for over 35 years.

In high school, Frey took art classes and a special art mentorship program and studied philosophy and classical literature at St. John’s College in Maryland before moving to France to learn French and to work as an au pair. He then went to New York in 2001 where the art forms of collage, and “pure assemblage,” would absorb his attention for the next decade.

Frey says he was influenced by the ideas versus the surface aesthetics of his artistic role models, collagist Kurt Schwitters, Robert Rauchenberg, master of painting, collage and silkscreen, and Pop artist/silk screener Andy Warhol.

In those lean, early years, Frey focused on collage, but continued to draw and take life drawing classes at the Art Students League. He sold his work directly to collectors, supplementing his way with waiting tables and working security in a Broadway theater.

After years of working in abstraction and collage, he says, “I started to express myself through a body of work on energy and movement. My drawings moved to the forefront and collage to the background.”

His technique would evolve into a laborious process, first creating an abstract collage onto which he paints and then draws. His work does not represent specific places but often an imaginative, varied terrain and collage of different subjects.

“I have always loved drawing and, to me, it is central to the creative act. I love the raw energy of ancient expressive marks in caves and the preparatory sketches of the old masters, and I love to work with bold lines and gestures in my own work…Drawing has often been a preparatory stage in the creation of a painting but, as an expressive medium in itself, it allows so much room for the imagination, and I work with these inherent ambiguities to create a sense of motion and energy in my paintings. While drawing holds a central place in my work, I like to build up a complex surface of collaged antique book pages, sheet music, stenciled images, and paint, creating a background that interacts with my drawings and adds depth to the interpretation of the piece.

“I am drawn to subjects that inspire curiosity and tell a story, and I like to juxtapose the scenery of everyday life with unexpected or unusual imagery. I feel that it is important to remind ourselves that we can still find wonder in the world that we experience everyday.”

Why elephants and circus animals?

“Elephants and circus animals are easy for people to see as totems or symbols. We know they exist but they are out of their natural context and so we look more naturally for metaphor in the scene,” says Frey. “Like Aesop’s fables, there is an odd blend of realism and absurdity that instantly brings the mind to a state of curiosity.”

A professional artist since 2003, Frey’s current series teases one’s vision, arousing wonder and surprise, as well as wry humor, nostalgia and even vertigo.

In a series of acrobats, Frey explored heroic movements, showing what athletic feats men and women are capable of.

“One week I read in the Village Voice that at midnight elephants were marched from their train cars up 31st Street to Madison Square Garden,” says Frey. “Of course, I went to watch. It was surreal. When I did the work, I translated the scene to small town middle America.”

Some time later, Frey was showing his paintings in Washington D.C. where a woman spotted the aerialist painting and declared, “That’s me.” She turned out to be an aerialist who performed in such parades and became the inspiration for a future piece with a balloon.

“I saw a photo of (lion tamer and circus impresario) Clyde Beatty in a Bentley or Bugatti Royale with an elephant sitting next to him on the ground. I thought it would be more interesting if the man wasn’t there.

“We tend to anthropomorphize things easily. We often think of other animals as having human characteristics. I like to create scenes with animals in human activities because it lets us see ourselves from the outside.

“When you see the title Mother and Child, it’s intuitive to think of a human mother and child,” says Frey. ”I want this to be seen as an unusual moment of meeting whether animal or human.

“Many animals share our same emotions. Do they experience an affinity between them, a commonality? Do they share connections?”

Beyond the circus, Frey finds creative vision in vintage ships, planes and trains.

“In the late 19th, early 20th century, there was a belief we could do anything,” says Frey. “Sail across the Atlantic. Ride across America. Jump off sand dunes in winged bicycles. It incites wonder.”

In Two Worlds, a French pilot with a hay rick represents the old aesthetic of agriculture and, hauling hay while the flying machine overhead represents the modern era, Frey suggests.

In Plane #2, two men wave their hats to something obviously new.

Frey’s own journey continues, a philosophy he notes, that begins in wonder, and desire to stay open to surprise and what’s out of the ordinary.

“Art needs to be universal and reflect the human condition. I aim for a thoughtful balance between reflection and celebration: a sense of wonder. I’ve succeeded,” he says, “if I inspire curiosity in those who view my work.” 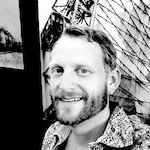 Benjamin Frey has won many juried competitions and shown his work in galleries in New York, Illinois, North Carolina, Tennessee, Georgia and Florida. His work is now part of a group show, Summer in the City, at the Glave Kocen Gallery in Richmond, Va. It runs from July 13 to August 25.

One thought on “Imagination in Motion: The Art of Benjamin Frey”