On the gridiron of family life, she and I stood
the sidelines, flanking the husband and father
who, fourth and goal in the waning minutes,
always called his own number.

She, the former German schoolgirl
who had fled here in ’36 with her hick-town kin,
to major later in garter belts and Maybelline,
and who would not at any time
have known a pigskin from an eggplant.

Though now that the masterful man is gone,
and she has her new bed,
having slept a single night
on his side of the old one,
Mom mentions during our weekly call
her desire to learn football,
so she can talk more knowledgeably
with the grandkids.

Her questions are not what a down is
or which one is the quarterback.
They’re about hard counts and bubble screens,
when to run the read option,
what to call against a two-deep zone,
why the ground can’t cause a fumble.

Suddenly, I want to know the woman
with her swollen feet up at eighty-eight,
watching the soaps in independent living,
her Hummel figurines dusted and singing
on the rosewood hutch.
The woman who last week sent me
a thousand-dollar check with the card that read
Since there’s nothing I can do for you,
who had served me in silence egg after egg after egg,
who had taken me, when I was four,
over Dad’s objections, to see Santa at Macy’s,
because her son was going to be an American.

Her girlfriends in Lambsheim should have
stood up for her. I wish I’d fought
to put her in the game.

My lover sits up at 2 a.m. like a jackknife
and says, “I put the couch in the microwave,”
though more often she just offers a few
unintelligible phrasings, then reengages
her pillow and the peace of the unsaid.
Which takes me back to freshman year
when a young woman stood suddenly
midway through a lecture on “Plato’s Cave,”
spoke gibberish for five minutes straight,
then stopped just as abruptly and said
to the class, “I don’t know why God has chosen
to speak through me today, but He loves you.”
Of course, I imagined sleeping with her,
the Cher-haired messenger in a peasant dress,
not because I wanted the translation,
because I wanted the transport—
to be that possessed, that called.
At the dawn of my seduction
by language, its loneliness, its mind,
I needed someone to speak for its body,
its suet and thew, its love affair with the tongue
unvexed by meaning or context.
I needed the vocabulary
our hirsute ancestors used before knowing
to what or whom they might wake,
the words whose work is not to tell us
but to reach us, dream to dream
in the middle of the night. 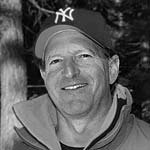 Ken Haas lives in San Francisco where he works in healthcare and sponsors a poetry writing program at the UCSF Children’s Hospital. His poems have appeared in over 50 journals, including Clare, Freshwater, Helix, Natural Bridge, Nimrod, Poet Lore, Quiddity and Spoon River. You can visit him online at kenhaas.org.

One thought on “Mom Wants to Talk Football; Speaking in Tongues by Ken Haas”