Before surgery, before the bones are set, and while blood flows from Jacob Randolph in quick rivulets, Agi is there. She is the nurse on duty when he is wheeled through the doors of the ER. She witnesses the doctors bring him back, helps quell the bleeding, feels a triumphant surge when his heartbeat regains its jagged kick on the monitor. She hears the head neurosurgeon muttering jargon to the fellows, picking out words where she can – cervical, contusion, ten-story fall. Eventually, the word stable, which shines among the rest.

Two months in the ICU, then he is moved to fifth floor trauma. The halo, casts, and gauze wrappings are removed. But Jacob Randolph can’t shake the coma. His sleep has ocean depths. Locked into repose, Agi sometimes forgets that he can’t wake up; that coma sleep is not a vacation, but a prison sentence.

Maybe because she saw his initial gory state and understands the weight of each inhalation, she feels connected to him in a way some other nurses do not. They hear her in his room, her voice hushed like a person summoning spirits.

“Give sleeping beauty a kiss, Agi,” they jeer. “That ought to do it.”

She ignores them. She has heard talking to coma patients can trigger response, and so she reads to him from her novels, tells him jokes, sings him folk songs of her youth. She tells him about Henry, her Irish Setter, an unwavering constant of joy in her life. About the grown children whom she loves, but sees less of every passing year.

The more she talks, the more she finds herself divulging; thoughts that have never bloomed into sentences. The loneliness that comes with night as a vague ache in the bones. That she never imagined life without Daryl, didn’t want life without Daryl, but after three years she only sees his face in dreams. That sometimes the world presses down so hard, she finds it difficult to catch a breath.

“What I can’t wrap my head around,” she says, “is what a young fella such as yourself is doing jumping off of buildings.”

But she apologizes to his still form. The kind of hurt it must take to do that – it’s a kind Agi can’t fathom.

“When you wake up, I think it’ll be different,” she says. “I think you might see things in a whole new way.”

She arrives on the unit one morning and finds Jacob’s bed empty. The worst comes to mind, but she nixes the thought, tells herself to breathe. He was fine the night before. Some little diversion—a trip to imaging, a room change—would explain it.

She scans the halls for someone to fill her in.

A cleaner, packing up from the night shift, is the first person she can find. His eyes are ringed and sad, his English broken at best. But his words are enough.

She nods, feeling as if she’s being submerged in ice water. The fluorescent bulbs cast an ominous glow as she floats to the nursing station.

No signs, no warnings. He go.

The other nurses, who have come to respect Agi’s devotion, say things like, “Sorry, Ags” and “Don’t take it too hard, sweetie”. She smiles, but feels no better. Feels somehow it is her fault. That had she done more—read to him more, held his bony hands longer—maybe he’d be living. That, inadvertently, she is the cause.

Hope, she thinks to herself. You build it up and it lets you down.

The months grind on, and they are hard, but Agi makes it through. She throws herself into work, doing as many shifts as possible in the ER, trying, in a sense, to save back what she has lost. She takes meandering walks with Henry in the evenings, does her best to stave off loneliness through friends and novels. At a hospital fundraiser, she meets a linguistics professor with smiling eyes and crooked teeth, who has a hiccupping laugh and a bounce in his step. Though she is hesitant, feels like invisible eyes are watching, they go on a few dates. He puts no pressure on her. They move slowly, gently, and like a teenager, Agi begins to relearn the awkward joys found in love.

Years spiral by. Busyness leaves little time for sadness. Every so often though, when Agi has a moment to think, her thoughts float back to Jacob Randolph. And though the memory is bleak, looking about her at the strange chaos of everything—love, colour, beauty, decay—Agi can’t help feel a rush of joy as well. Can’t help feel that, despite all the hurt, it’s well worth it. 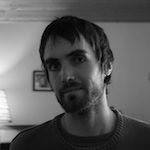 Ben Wood is currently a student at Carleton University in Ottawa, Ontario. A long time reader of fiction, he has recently made attempts to write his own. This is his first published piece. He can be followed at https://www.facebook.com/ben.wood.370.