If I had to pick a color to write about, it would be green. Leafy green, bold green, hunter’s green, the way it washes over the landscape after days and days of rain. Months of green from the beginning of May when the buds first begin to open, “when the world is really and truly green all over.” Emerald green. It’s the color of the season I love so much—June and the promise of longer days.

Gardening season begins. Things never feel completely settled until the weeds are tamed and the seeds are planted. Volunteer sunflowers and cosmos peek their heads up from the dirt to soak in the sunlight. The mulch, golden and fresh in its contrast to the dark soil in my raised garden beds. It’s an evolution of progress from day to day. I finish my coffee and head back outside for another session.

As a kid, I followed Dad from garden to garden. I didn’t fully understand all of the work he did, I was just happy to tag along. I knew it was important work. It was also obvious that he enjoyed it. Dad didn’t smile all the time. He was serious and thoughtful in his cut-off shorts and sandals. Sometimes he wore t-shirts, but mostly in the heat of the summer he went shirtless, and his freckled muscles made swift progress pulling weeds and tilling the soil. He tended to his crops with this quiet strength that I always admired in my father. He was deliberate in his steps between rows of cucumbers, tomatoes, and green beans. We ate sticky sweet pods of snow peas straight off the vine, and he taught me how to have fun playing in the dirt, and how to reap what you sow. Nothing else in the world existed beyond what he could do.

Memories of him flash by like the scenes from a movie trailer. Highlights. His cut off shorts and t-shirts, sandled feet, the sweet smell of sweat and dirt mixed into the humidity of summer evenings. Working in the garden every evening after he came home from the hardware store, when I’d throw my arms around his neck he smelled of cardboard, fertilizer, and sawdust. He’d change into his cut off jean shorts and paper-thin old t-shirt, and I’d follow him out the screen door.

My father had gardens scattered around town because our backyard didn’t allow enough space for his growing ambitions. He needed space to grow enough fruit for canning: tomatoes and juice, quarts upon quarts of green beans, and pickles. Our backyard, a patio, a small metal shed, flower beds around the chain link fenced perimeter, a walnut tree with a tire swing next to a swing-set Dad had built, and in the center a square plot reserved for the garden. In the spring, he planted sweet onions and rows of leafy lettuce and snow peas. In the heat of the summer, we had tomatoes, green beans, squash, cucumbers, and corn.

Helen lived next door. She had a trellis of grapes in the middle of her open backyard, and flowerbeds full of snapdragons, lilies, and other wildflowers that seem untamed along the farthest edge. The gardening flowed from our backyard and into hers, and then continued up the street to Aunt Betty’s little white house on the corner. The final garden spot, which I remember as being mostly tall stalks of sweet corn, was in the lot adjacent to the hardware store. Summers were sultry, and the corn rows were enough to get lost in.

When the tomatoes ripened and hung from the vine, it was time for canning. He had a large silver grinder that attached to the counter with a vice grip. With strong hands, he would crank through the celery and skinless tomatoes while we held the jars to catch the juice. He worked for hours until he filled enough mason jars to satisfy the demand. The steam from the celery and tomatoes reached every corner of the house even with the windows open, cloudy kitchen windows from the boiling water and August humidity. Canned tomatoes and juice made those hours in the garden worth it. Waiting for the lids on the jars to pop in sweet anticipation, we celebrated each successful seal as he lined the cabinet with jars. Winter would taste like August.

When I was around 12, my father poured a cement slab over his garden in our backyard to put up a basketball hoop for his daughter. I wonder if that’s when the unraveling began. He painted the pole red, white, and blue, and hung a net to match. I played around and practiced my foul shots, but I felt guilty that he had given up his space for something that I secretly didn’t really need.

A couple years passed, and we left the old neighborhood for a three acre spot across the river on Sandy Hook. Dad tilled up a garden that stretched the length of the woods in the back corner of the property. In an attempt to discourage the deer, he stretched wire fencing around the perimeter and built a gate. He began construction on a shed next to the garden. We had a couple more canning seasons before I left home for college, and by the time I came back home, he was gone.

I was 27 when my father took his life. I continued to do the things we used to do together in an attempt to comfort that little girl who didn’t understand where her father had gone. I drove his mower around the yard every Sunday. I moved home, got a teaching job at the middle school down the road, I continued to maintain the property, and I paid half the mortgage. His friends tried to complete the construction of his shed with the French door. I tried to plant a garden and repair the fence, but the deer had other plans, and that first season devoured every last green tomato off the vine while my mother and brother watched from the back patio. Instead, I grew gourds, the only fruit the deer didn’t care to eat, and I lined the chalkboard in my classroom with their colorful array in tribute.

I love fall, but my least favorite season of summer is when everything starts to die. We’ve passed by the peak of blooming season for some, evident in the dry brown sunflower stalks with only a few golden petals still trying to get noticed by passing goldfinches and monarchs. The heavy bushes of cosmos give up on their struggle to stand tall against rain storms and sweltry heat. The last few green beans on the vine become stringy and bitter.

I fight this melancholy the most in September when the leaves of the walnut tree start to fall. I’m not sure when my hatred of walnut trees began, but I assure you it becomes more intense as fall approaches. Every leaf that falls, every hard walnut that bangs triumphantly against the tin roof of my shed taunts me like a playground bully. I remember the stained hands of my beloved Meemaw who would never let a walnut go to waste in her front yard. Even when her hands became knotted by arthritis, no pan of brownies ever went unseasoned by that bitter fruit.

Walnuts poison the ground. I never knew if that walnut tree in our backyard when I was a kid impacted the strategic placement of Dad’s gardens. He hung a tire swing from ours, and when I got big enough to climb it, I would sit among its branches. I know now that walnuts are poison for certain crops, like tomatoes. Every time I work outside, I curse the walnut tree that grows just outside of my property line. It taunts me as my tomatoes suffer because of the poisoned soil radiating from that damned tree. It reminds me that I am helpless and vulnerable. Summer tomatoes are too precious, yet I essentially lead them toward inherent doom every summer I plant them in my yard. My hope was only discouraged in the final days of summer when the supply never met the demand. It’s September, and I’m still waiting for one seemingly forbidden fruit to change from brilliant green to crimson.

He never taught me explicitly, but I came to understand which vegetables could stand up against the poison—green beans, yellow squash, and plenty of flowers. The eggplants also decided that September is the preferred month to produce fruit. It’s all an exercise in patience, like the monarchs who wait months to settle on one flower to drink, uninterrupted affairs with their preferred flowers, exchanging glances with the honeybees as they coexist in a pollinated paradise. Everyone’s time is limited, but no one complains or sinks into a depression because of it. Why must humans suffer this burden alone?

I try to be in the moment as I observe these quiet exchanges. I envy the goldfinches as they pick away at an enormous sunflower head, spreading potential growth for the coming spring. They work purposefully and deliberately, storing energy for an imminent migration, where someone else waits by an empty garden path for visitors. 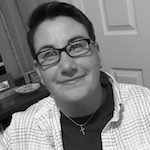 Leslie R. Artz teaches Language Arts to 8th graders in a small, rural school in the Shenandoah Valley, Virginia. When not writing poetry and creative nonfiction, she tries to instill a love of language in her students. She is a gardener, a mother to three special pups, and a devoted wife. Find her on Twitter, username @lrartz.

One thought on “My Father’s Gardens by Leslie Artz”