because hope is a motherfucker,
i went up to each house of the dead
and knocked, but no one answered.

still, i am haunted:
the sun sets a little dimmer ever since the last
feeble twitch of that cat’s tail, even
while its head lay red
& bashed on the dusked asphalt,
the traffic passing and passing.

because the heat doesn’t work properly, we
huddle nose to nose, the trauma of the world
reduced to a single stray hair strangled
in the neck of your tee, golden
in the breath of the bedside lamp; to
my hand on the hard hip
of you, claiming.

Do you feel safe here a woman stopped
us today to ask, one female to another.

No, i think, thinking
of the cat, how its dying dropped
me as fluorescently as
the news of my mother’s death,
four a.m. on cold tile.

this is not what she means,
so i say nothing, let you
do the talking for we,
though i think in your thinking
it is never we, even
while the gunshots we don’t tell her about
go off like confetti;
while the leaves fall on
our huddled corner like a red rain.

i knocked, but you never answered.
in a quiet walled space with two graves over—
looking the river, there
is a bench of stone
where we sat once, one
ghost to another, or maybe
we did in a dream, the late
light filtering through. 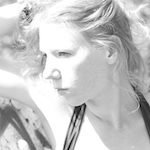 Joanna Suzanne Lee earned her MD from the Medical College of Virginia in 2007. Focusing on the intersection of healing and creativity, her poetry has been published in several online & print journals and has been nominated for both Best of the Net and Pushcart prizes. Joanna is a founder of the River City Poets community and an editor, along with Marsha Owens and Judy Melchiorre, of the recently published anthology Lingering in the Margins.