I paint to find out what I think about the world; to discover the things I do not have words for. With collage, I love the randomness of the snippets of text and photographs appearing and disappearing that becomes the subject’s likeness. Even as photos and text become part of the pattern of lights and dark that create a coherent likeness, they also retain their original form and meaning.

As a recovering lawyer and a political junkie, I am interested in the political, financial and media worlds. It was a natural direction for me to try and make work about actors in these worlds, both those I admire and those I don’t. In making these portraits, I often use newspaper text and photos about the person or events the subject is involved in. Instead of illustrating the subject’s attributes with a symbol, as a Renaissance era painter would do, I collage the portraits with materials and text from the subject’s world.

My process for the college portraits has been evolving over the dozen years I have been making them. I start with a drawing, which I scan and then project onto the canvas, giving me the collage’s structure.  I start collaging the background, followed by the subject’s suit or collar. I then use a palette of collage materials on the head, starting with the darkest portions, working towards the lightest. If I see that one layer does not work, I collage over it. After covering the canvas, it may need paint to complete the portrait. If so, I then glaze on acrylic washes. It is a very slow and intuitive process.

When the Mueller Report came out, I immediately read it, and was horrified. Though I’m trying to get out of the Trump business, it was too perfect not to do a collage. For Individual One, above, (the designation for Trump in the Federal criminal action against his former lawyer), I used text from Mueller’s report.

My first collage of Justice Ginsburg—one of my legal heroes—was done in January 2019, when she was having a cultural moment—the subject of a book, blogs, memes and movies. I thought that her legal writings provided a trove of potential collage material, from her briefs to her judicial opinions and dissents. When doing RBG, I thought I would need material from one of her briefs, a Supreme Court opinion and dissent.

An advocate before becoming a Judge, Ginsburg’s  U.S. v. Virginia 518 U.S. 515 (1996) opinion struck down the male-only admissions policy at the Virginia Military Institute, an ideal background for RBG.

For STOP, I threw ink and acrylic at a metal stop sign to create the President’s silhouette, while allowing the word stop to be legible. This is a riff on the “Stop the War” stickers from the 1960s and 70s, and also an homage to the paint handling of Francis Bacon, whose images often appear to be made of splashes of thrown paint.

Boris was devised in London in August 2015 while I participated in the first London Intensive hosted by the Slade School of Fine Art. The London Intensive was a month’s residency for twenty-one artists from thirteen countries. During the third day of the residency, a tube strike started in the evening and continued through the next day. More strikes were threatened. I originally wanted to use tube maps to do a portrait of Boris Johnson, the Mayor of London. Since the drawing for the Mayor’s portrait was over nineteen square feet, it was not realistic to utilize the small tube maps. Instead I used the Metro and Evening Standard papers that are given away at most tube stops. Tube maps are used for Mr. Johnson’s eyes. Boris was shown at the Camden Arts Centre exhibit concluding the London Intensive.

Jill Abramson was the first female managing editor of The New York Times. In 2014, when she asked to be paid the same as her male predecessor, The Times fired her. Hearing of her firing, I painted Abramson’s portrait against The Times business section.

My portrait of Rachel Maddow was an emotional attempt to find a bright spot in the 2016 presidential election. In January 2017, I was in a panic as Mr. Trump was about to be inaugurated President. I was looking for a visual metaphor for my desire that he not be our next President. I depicted television anchor Rachel Maddow, one of the sources I depended on for information and hope. I used collage material from the election, often of Mr. Trump, to create a likeness of one of his fiercest adversaries.

Admiring Ginsburg’s career and intellect, I enjoyed making RBG so much I thought I would be fun to make a portrait of her using one of her dissents. My most recent collage, Dissent Collar, comes from Justice Ginsburg’s lace collar she is said to wear when reading her dissents from the Court’s opinion. The Dissent Collar is made with collage material from Ginsburg’s dissent in Burwell v. Hobby Lobby Stores, Inc., 573 U.S. ___ (2014). The Hobby Lobby majority held that the owners of corporations are not required to provide employees with insurance covering contraceptives if the use of contraceptives is against the owners’ religious beliefs.

I am now working on a body of work, a series of political collages, which I hope to finish in the months ahead and to show later in London. 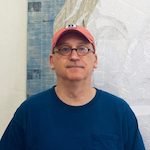 A New York artist, Stein’s work has been shown throughout the U.S., as well as in London, Paris, Dublin and Iceland. He is represented by the Minster Gallery in the U.K. To see more of his work click here, and check his earlier Streetlight profile.