I don’t wish ill of others. I hand out candy. I praise fairies and princesses, soldiers and supermen. I even humor parents who dress infants as vegetables or baby birds—but all the while, I’m inwardly rolling my eyes, wishing the night to be done.

I blame this on one childhood Halloween: the night that penicillin stood between me and perfection.

This was during the late 1950s, before every drug and grocery store sold plastic masks and costumes. We dressed in whatever getups we could find, and I had waited a lifetime, I was sure, to fit into the costume my grandmother had made for a brother long ago.

I would be a devil, complete with pitchfork and tail. The top even had a hood with evil little horns and ears. It was divine.

But on the morning of Halloween, I awoke with strep throat.

I worked hard to pull off a grand deception. I laid low, refused to complain about my burning throat or the fever that threatened to scorch every inch of my skin. If I could just get through supper, I’d be fine.

It was a good plan but for one major hitch: my mother was a pediatrician. She took one look and decreed there’d be no candy for me.

I could barely talk, but I found a way to beg, to plead, to cajole. Somewhere between the tongue blade and the stethoscope she used to examine me, she relented.

“All right,” she said. “You may go out for one hour on the condition that you have a penicillin shot.”

A shot. She may as well have threatened me with amputation. I was five. Nothing frightened me more than a needle. The barest sniff of an alcohol swab sent me into near hysteria.

But that costume called. What would I do? She didn’t wait for a response.

“Now,” she said. “Do you want the shot before you go, or after you get home?”

Both my brothers stared at me across the table. I was frozen. A shot.

Finally, one of them spoke: my brother BB, whose life’s mission was to torture me with constant teasing.

“Do it before,” he said. “That way, you don’t have to dread it the whole time you’re out.”

Well, it made sense, but this was BB talking. In what universe would he offer good advice?

I mulled the options, summoned a bare thread of courage.

We lived in a big Victorian house, the front of which served as my mother’s office. We didn’t go far before the moment came.

Just as we entered the hall, I had doubts. My legs locked. My eyes grew wide.

“No. You said before, and before it is.”

“No,” I said, praying for reprieve, “I really think we should wait until after.”

My brothers stood on either side of me like a pair of gangster goons. I looked to them for help and got none. Instead, they each grabbed an arm and ushered me into the examining room. I was screaming the whole way.

The syringe and the bottle waited on a silver tray. I was nearly hysterical with fear until…I got the shot.

Whimpering, I went to my room, donned the costume and went out on the town.

I must’ve been three blocks from home before I realized that BB, of all people, had been right: get the shot, ditch the dread.

I’ve carried that lesson with me ever since: always to do the hard stuff first. Get it out of the way. Face the Trick before the Treat.

And, yes, the shot did its job; I was well in no time.

But the damage of that All Hallows’ Eve was done. I felt robbed of control, and that moment of helplessness, of being forced to face my biggest fear, has been with me every Oct. 31 for more than sixty years.

Now go away and leave me alone. 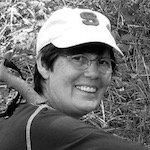 Priscilla Melchior is a career community newspaper journalist who retired to Highland County, Virginia, where she lives with her husband and two border collies. Her work has previously appeared in this magazine.

One thought on “Haunted By Halloween by Priscilla Melchior”